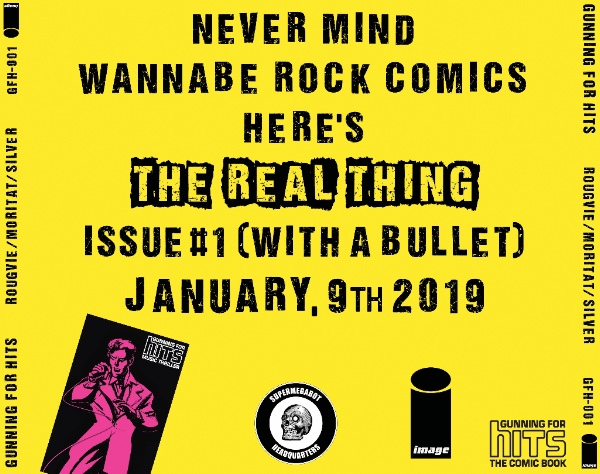 Jeff Rougvie and Moritat are Gunning for Hits at Image Comics

Award-winning music producer, Jeff Rougvie, known for his work with David Bowie, Elvis Costello, Big Star, Morphine, and many other great artists, will team up with Moritat (The Spirit, Harley Quinn, Hellblazer) for an all-new, ongoing thriller series, GUNNING FOR HITS. The new series will be based upon Rougvie’s rich background in the industry and draw upon experiences during the outrageous period in the ‘80s and ‘90s when record labels were flush with cash beyond their wildest expectations and the business got more criminal and more corporate. GUNNING FOR HITS is set to launch on Wednesday, January 9th, 2019.

Rougvie and Moritat will both be at New York Comic Con this weekend to share more on their new series on the Image Comics’ panel, #WeBelieve in Vision, from 2:45 – 3:45 PM in 1A24 and will be handing out a special, limited edition GUNNING FOR HITS promotional jewel case with mini-comic teaser inside.

Set in the shady New York City music scene of the mid-80s, GUNNING FOR HITS stars Martin Mills, a record company talent scout with an inscrutable past. Follow Martin as he attempts to sign a rock band that’ll conquer the world. Plus: each issue will include a background feature and a Spotify playlist.