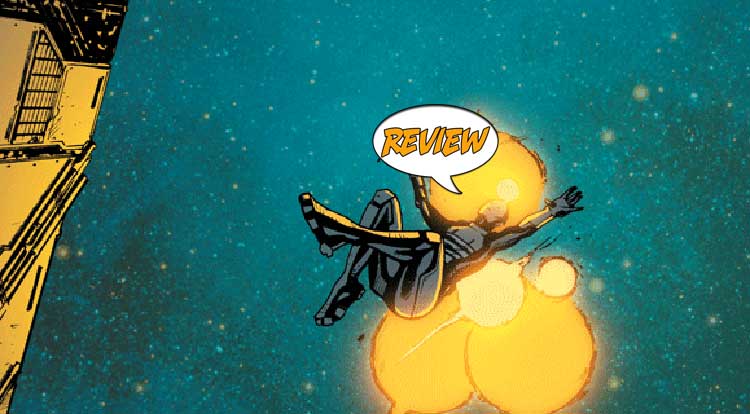 Steeped in survivor’s guilt, Director Deva must investigate the first murder on the Orpheus, a space station located at the end of the universe in Infinite Dark #1 from Image Comics. Previously in Infinite Dark: The heat death of the universe, long thought to be tens of billions of years off, instead happens 10,000 years in the future.  A mad scramble to create a refuge ends in disaster for humanity, leaving a scant few to face the knowledge that outside the thin protection of the Orpheus’s hull, nothing exists.  And now, when the chief technologist takes a hostage and goes missing, a greater mystery unveils itself…

THE SANCTUARY AT THE END OF THE UNIVERSE

Infinite Dark #1 leverages off an intriguing and horrifying idea – what if the ultimate end of the universe, what physicists call the heat death – happens a few scant thousand years from now, and not billions of years.  A mad scramble ensues, to build space station Orpheus to hold 15,000 humans.  Fleets of colony ships race towards the Orpheus’s location, attempting to beat the termination of the universe, which leads to catastrophic losses as each ship overload its drives and explodes.

The two thousand who remain live a precarious shadowy existence inside a tin can beset on all sides by pure nothingness – no living thing, no planet, no ship, no atom outside exists anymore.  Into this scenario is introduced Security Director Deva, who opens the Infinite Dark #1 during her mandatory counseling session with Sm1th, the Orpheus’s AI.  The session is soon interrupted when news reaches Deva that Tech Director Alvin Scheidt has vanished, taking a hostage with him.  A chase ensues into the Dark Sector, an unused portion of the station, and in the final pages of the book, Deva sees…an impossibility.

Dodgy physics aside (and in the end matter of this issue, writer Ryan Cady explains why brought forward the end of the universe), this opening issue combines a compact explanation of the background to this world, with a grim depiction of the remnants of humanity existing in a universe that no longer exists.

Cady explains that when he was writing the book, he was grappling with severe depression.  He further says that as a means of coping, he reached for any piece of horror fiction he could put his hand on.  It is no surprise then that Infinite Darkness, from the premise to the horrifying realization that the survivors are all that remains of humanity in a totally empty universe, is as dark and bleak as it is.

As you would expect, it’s not all rainbow and sunshine aboard the Orpheus.  Two thousand souls jammed in a tin can with nothing to do but exist.  The mandatory two-hour monthly counseling sessions with the ship’s AI hardly seems adequate against the crushing realization of the situation everyone faces.  Someone once wrote that hell is other people, and life on the Orpheus is the purest expression of that sentiment.

Cady handles his premise concisely.  The inevitable info dumps are precise and don’t sprawl across the narrative.  Deva is a no-fuss character tasked with keeping everyone on board in line, in the face of the crushing reality of their daily lives.  Its testament to her strength that life onboard didn’t dissolve into a hellscape within days of the last colony ship’s destruction.  Sm1th, the AI, is another presence in the narrative, chiming in, occasionally acerbically, to give updates and assistance as the chase of Scheidt unfolds.  The other characters in Infinite Dark #1 are more peripheral, and no doubt will assume large positions as the series unfolds.

Italian Andrea Mutti handles the artwork.  There’s definitely a euro-feel to the character design – everyone looks and feels like a human, and not the muscle-bound freak one finds increasingly tiresome in superhero comics.  Indeed, it’s that essential ordinariness of the characters, set against an uncaring, empty universe, that makes their predicament even more daunting.  Mutti’s best work is probably on page 19, where good use of panel layout propels the storyline, with a larger image of Scheidt, in his gory glory, enough of a gut punch to make the reader pause with a lurch.

Colors by K. Michael Russell are subdued, as befits the premise.  Much is made of autumnal colors in the Dark Sector, and some nice use of light and shade to add menace to events.

I would recommend readers check out a short story by science fiction writer Charles Stross, called A Colder War, whose ending embraces many of the same concepts as Infinite Dark #1.  That aside, this series is another example of science fiction horror.  This time, the horror is as much psychological as anything else.  It’s one thing to realize your mortality in the face of a vast universe that doesn’t care; it’s another to make that same realization when there is no universe left at all.  This knowledge, intangible though it is, is perhaps the strongest aspect of Cady’s script.  The character’s go through the motions of their daily lives, they may even be enlivened by a manhunt through a spooky place, but in the end, against the death of the universe, what does all that matter?

It’s one thing to realize your mortality in the face of a vast universe that doesn’t care; it’s another to make that same realization when there is no universe left at all.  This knowledge, intangible though it is, is perhaps the strongest aspect of Cady’s script.