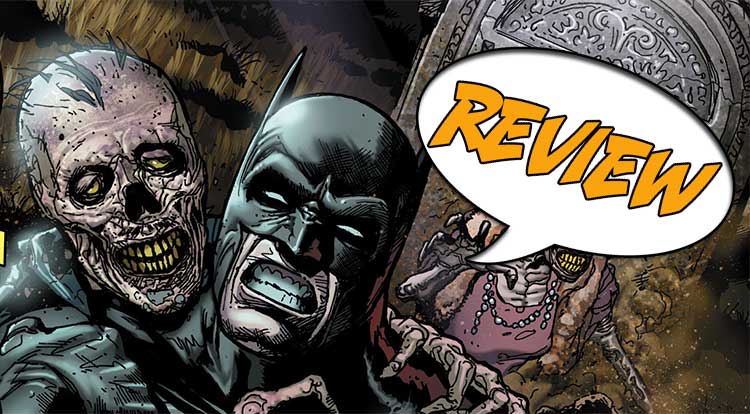 It’s October, and that means fall has arrived, Halloween is coming, and the horror comics are preparing to hit the shelves. This year, DC Comics decides to get in on the act in a giant way, with an 80-page giant entitled Cursed Comics Cavalcade, which is out today. Let’s crack open this tome and see if it is worth summoning up in your pull box! Previously in CURSED COMICS CAVALCADE: There was no previously, this is the first time this title has made an appearance on the DC publishing roster. However, the title was most likely inspired by Comic Cavalcade, an anthology title which ran in the Golden Age of comics from around 1942 to 1954. That venerable old title featured the DC heroes, usually Flash, Green Lantern and Wonder Woman, in monthly adventures outside of their own regular titles. It eventually morphed into a funny-animal book. And now you know!

TALES TO MAKE YOU SHIVER AND QUIVER

The ten tales of terror featured in this titanic title range from the mild to the malevolent, but they all feature DC superheroes. Swamp Thing, Batman, Wonder Woman, Guy Gardner, The Demon, Superman, Green Arrow, Black Lighting & Katana, Robin and Solomon Grundy, and Zatanna all star in their own stories which embrace the Halloween theme in one way or another. Some of the stories are mild, with only slight shivers to be had, while others are much more chilling. I want to touch on my favorite three stories, and give you a few thoughts on them.

Writer Tim Seeley (Grayson, Hack/Slash) and artist Kyle Hotz (Ghost Rider 2099, Zombie) deliver the first tale as Swamp Thing attempts to save a woman from her own curiosity and the horrific consequences it may bring in “The Spread.” This one, I have to say, is one of my top three for this title. Seeley and Hotz make a terrific team. The writing was smart with a hint of terror to come, and the art has a fluidic quality that recalled the old horror titles of the past such as House of Mystery. In a few short words, the story was beautifully drawn and brilliantly written.

In “Gorehound”, Batman tracks down a serial killer who stages their murders in the form of horror films. Screenwriter Gary Dauberman (Annabelle, The Nun) and illustrator Ricardo Federici (Aquaman Batman: The Murder Machine) craft a story that has some excellent twists to it, diverting your attention and then jumping up behind you to deliver the big boo! Federici has wonderful artistic chops, and if this is a glimpse at what we may see with Dauberman’s “Swamp Thing” live action series, I may have to give the streaming service a try.

The grim gestalt of The Demon Etrigan and his erstwhile alter form, Jason Blood, share center stage with a wicked, true to life horror from the 19th Century known as “Yellow Jack”. Yellow Jack was a slang name for the devastating disease known as the Yellow Fever, which ravaged the Southern United States in mid and late 1800’s. This take is set in 1853 New Orleans during the real-life epidemic that killed nearly 8,000 people. The twist of here was so good, I have to say I am totally enamored with the idea of a Jason Blood/Etrigan series which ties into real-world horrors. The script by Gabriel Hardman (Star Wars: Legacy, Hulk) & Corinna Bechko (Heathentown, Invisible Republic) is so good I want to see more. Hardman also contributes the art and it is moody, atmospheric, and a near perfect fit for a New Orleans tale of horror. I love it. More please.

THAT SOUND IS THE BEATING OF YOUR HEART

The other stories in this volume are just as good. We get Wonder Woman fighting an ancient Greek terror, Guy Gardner hacking away to space zombies, Superman facing an evil from his family’s history, Black Lighting and Katana taking on a Japanese horror-inspired, in part, by a Japanese urban legend, Green Arrow facing his own monsters, Robin and Solomon Grundy teaming up to save the children, and Zatanna teaching a young girl’s brother a lesson in humility. There is something for everyone, and all of the stories are excellent one-shots that satisfy.

BOTTOM LINE: A GREAT ADDITION TO THE HORROR ANTHOLOGY TRADITION

As I said before, the stories in Cursed Comics Cavalcade range from truly scary to a mild shiver, but they are fun and well worth the $9.99 that constitutes the asking price. It would be nice to see more anthologies of this type. They give you a chance to sample multiple creators writing characters and situations they may not have the opportunity to in the normal publishing calendar.

CURSED COMICS CAVALCADE #1 is a continuation of the great horror anthology institution. Hopefully, this will turn into an annual celebration of all things great about Halloween.

Wonderful book with creators from not only comics but film delivering imaginative stories that will delight as much as chill. Go dig you up a copy now.