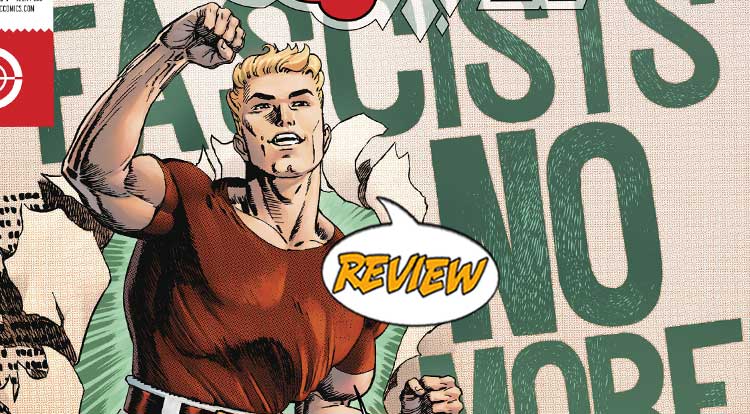 An old hero returns, and it’s all Harley’s fault.  After all, she broke the continuity of the universe.  Your Major Spoilers review of Harley Quinn #51 awaits! Previously in Harley Quinn: Harley broke most of DCU continuity last issue, and in this ish, she’s dealing with the fallout, namely the time-tossed hero of World War II called Captain Triumph! The golden boy of the Golden Age finds his black-and-white approach failing miserably in the gray areas of the modern world (although unfortunately, there are still plenty of fascists for him to punch). It’s up to Harley to return Captain Triumph to his own time, but she’ll have to put the kibosh on his do-gooding first-right after she figures out what “kibosh” means!

We open in New York City, with Harley hanging out with her mother (?), who has some choice words for her daughter about her choice of men and her classic harlequin-inspired leotard costume.  Their bonding session is interrupted by the arrival of Captain Triumph, fresh out of 1940 in his red t-shirt and jodhpurs, but very disoriented by the trip to a new century.  Triumph tries his best to be the hero he used to be, but mistakes the ubiquitous cell phones for mind-control devices and becomes quiet confused by 2018.  Harley calls for help (in hilarious fashion, by the way, remarking that Legion Flight Rings are made of aluminum, forcing Jonni DC to call her and correct the error) and gets told to keep him under wraps until she can figure out a way to get him back home to the days of Glenn Miller and Fibber McGee.  Being Harley Quinn, she chooses the exact opposite, taking him on a tour of NYC the way he remembers it, with Coney Island, some Yankees baseball and a few fascists to punch.  But when she spills the beans that she’s the one responsible for his exile, Captain Triumph loses his cool and prepares to crush her skull like an eggplant.

I LAUGHED AT THE JONNI DC JOKES

First off, this art in Harley Quinn #51 is BEAUTIFUL.  Captain Triumph has never looked this good, Harley and her mom spend a couple of pages having a conversation over coffee that is by turns silly, touching and expressive, and the vast range of faces is truly impressive.  The story is a little bit more fungible, offering some fun dialogue, an amusing/terrifying look at the parallels between 1940 and 2018 and some cute Harley dialogue (and also Jonni DC with a room full of Donna Troys, prepared to finally sort that continuity mess out once and for all) but feeling like a side trip in a bigger story.  That’s not a bad thing, mind you, especially in a Harley Quinn story, but I wanted to know a little bit more about the bigger story of Harley breaking the universe.  Still, the interplay between our Dr. Quinzel and time-lost Lance Gallant is able to support most of this issue, especially the sweet realization that parts of his home city still exist in the mess that is the future.

All in all, it’s a fun chapter of Harley’s adventures and one that uses an old school Quality hero in a new light, which gains my favor, leaving Harley Quinn #51 with a better-than-average 4 out of 5 stars overall, thanks to some really amazing art.  Using Harley’s attitude to play off a traditional, square-jawed Golden Age hero is comedy gold, if you ask me, and I wouldn’t mind seeing the Captain stick around the present for a while.

Incredible art and a cute little story end up feeling a little bit inconsequential. Still a fun read, though.