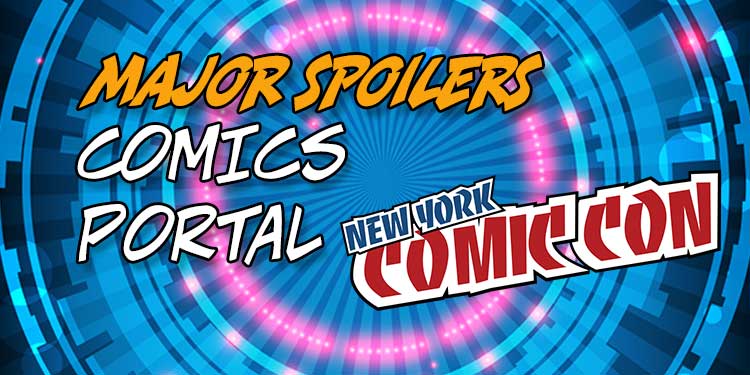 COMICS PORTAL: Some Collectibles Have Disappeared!

This past weekend, I’ve had the chance to walk the floors at New York Comic Con 2018, probably the last big convention of the year!

As I looked around, I suddenly realized that some of the collectibles that used to be regularly found at these cons were apparently no longer there. On the other hand, some newer collectibles seem to have taken their place. At least, according to my observations. I’ve been attending this convention for several years now, and I think the number of people who attend continues to increase. I heard that this year’s estimates were about 250,000 folks coming in and out of the con’s doors.

I helped out with Scout Comics in the Small Press Section. Of course, they were selling Stabbity Bunny, but I also got to talk with attendees and also sell other books from the company, including Solar Flare, Mindbender and Long Lost. I think this section is also growing since I am seeing more and more creators selling their wares in that part of the Jacob Javits Convention Center.

Artist Alley was in a different part of the building than last year, which seemed to provide some more room than last time, but I could be wrong about that. I saw many new folks there, and they seemed to be coming from farther away.

Normally, I’ve worked with BHI and DC Comics to procure interviews for my podcast during NYCC and other larger cons. Those folks are always great and have helped me promote DC through these conversations. However, this year, they had a reduced number of pros available, so fewer press folks got to interact with them, and that meant I didn’t get the chance to talk with them. BHI and DC have really been so kind and considerate with me for so long that I can’t complain about anything to do with this! After all, they helped me secure a great discussion with Robert Venditti from Hawkman for podcast Episode 350! I have nothing bad to say about anyone involved–they are the very best! So, what I did was use this opportunity to work with other companies and creators to get interviews. I don’t know if this will be the new normal for upcoming cons, but I certainly understand reducing costs by having fewer folks attend cons and inducing expenses such as hotels and transportation and food and such. We’ll see!

I still believe that the new method of distributing passes to fans works in terms of allowing more people to attend and helping dealers and artists make more money each day since people who attend often must buy what they want the day they’re there. You can’t look things over on Thursday, then wait until Sunday to buy what you want, a common con practice. This is still the only con I’m aware of that follows this practice, but I bet we’ll see others follow suit soon.

WHAT I DIDN’T SEE Granted, collectibles change over time. What some folks consider valuable, well, others don’t. When that latter number reaches a certain point, the reason to sell them at cons–that is, making money–lessens greatly, so dealers seek out more lucrative replacements.

One thing I used to see exhibitors sell was plastic cups featuring superheroes on them. Neighborhood 24-hour convenience stores like 7-11 were famous for them back in the day, and anything that had images of our favorite heroes was something special. Many of us went to buy smoothies and similar things on a daily basis, hoping to get the cups that had our favorite heroes on them.

Closely related to these were glasses with heroes printed on them. Often these were originally  peanut butter or jelly jars, and they were tough to find as well. So many folks seeking these had to go to cons to find them, especially before the day of the Internet.

Now, I may have missed dealers who were selling these items at NYCC since I couldn’t closely inspect every booth. But they weren’t very visible if they were there!

Another collectible I didn’t see were the plates that had images from comics on them. Some of the ones I used to want to buy featured art from Alex Ross on them. Tempting, but I didn’t get them at the time. Now, I didn’t see them at NYCC, and that included Mr. Ross’s own booth!

WHAT I DID SEE MORE OF I suppose it will come as no surprise that one of the things I see more of on sale at cons like NYCC are comics themselves. Pretty much all eras were represented, from the 1930s forward to today. And that included newly released books. It used to be that I’d never find books that had been released on the most recent Wednesday at a con. Now, I see several dealers who make a habit of it! That helps, especially if you’ve been out of town for several weeks, much like I have been!

Another thing I see more and more of are what we refer to as “slabbed” comics. You know, the ones from CGC, CBCS and the like that are rated for quality of paper and printing, then encased in plastic to keep them in as excellent shape as possible. I saw many early comics from the 1960s to today slabbed and often signed. Of course, autographed comics are worth more since someone took the time to get them signed, then submitted to the slabbing companies. The number out of 10 that was assigned to the individual comic raised the cost of that issue. If you had a 9.9 out of 10, you’d have to pay more to get it. The lower that number, the less you’d pay, depending on the issue.

It does make a lot of sense for a comic con to sell more comics, after all! This doesn’t bother me in the least! However, if you are looking for items I previously mentioned above or others, that Internet we’ve come to depend on may be your best choice to finding what you’re looking for!

What do you think? Are dealers at comic cons making the right choices? Or should they continue to try and make available those items that certain collectors might be seeking? Whatever your opinion, be sure to share your opinion and thoughts in the space below!