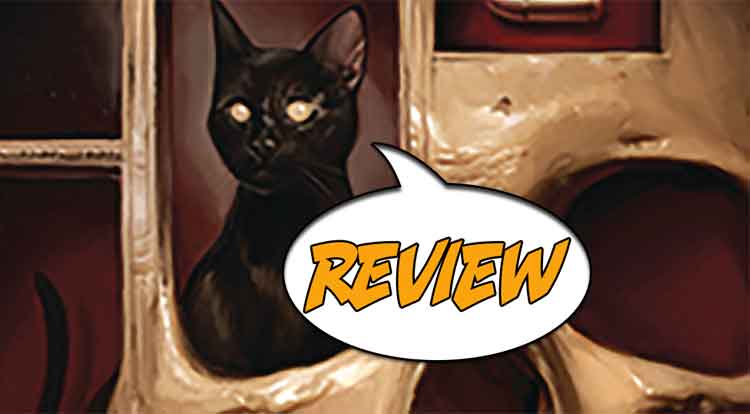 Ripley’s Believe It Or Not! #1 Review

Ripley’s Believe It or Not is practically an institution for fans of the odd, the strange, and the unbelievable. Having appeared in comic form from multiple publishers over the years, Zenescope Entertainment is the latest to bring those interesting and bizarre tales to the comic stands in Ripley’s Believe It Or Not #1. RIPLEY’S BELIEVE IT OR NOT! #1

Previously in RIPLEY’S BELIEVE IT OR NOT!: Robert L. Ripley traveled to over 200 countries in 35 years and collected the most strange, bizarre, and unbelievable facts and items he could find. The details of his findings have been chronicled in newspapers, books, radio and television shows, roadside attractions and comic books. Now, continuing that four color tradition, Zenescope Entertainment releases the first issue of a new anthology of stories based on some of his most famous real-world findings.

TALES AS UNBELIEVABLE AS THEY ARE TRUE

This first issue of Ripley’s Believe It or Not is done in the revered anthology format. As the issue begins, we see a holographic Robert L. Ripley greeting his guests at the famed Ripley’s Odditorium in Branson, Missouri. A father takes his young son through the exhibits, each of them true and uncovered by Ripley, until a particular exhibit grabs the young boy’s attention. That exhibit, the story of Pedro Gonzales aka “The Wolf-Man”, sets the stage of the first of five tales inspired by the stories which Ripley would relay over the years. The other tales in this edition include that of Phineas Gage, the man who had an iron rod driven through his head and survived, the time a dead man won a horse race, the cat who foretold death, and a story inspired by the Yellowstone supervolcano. All the stories are fictionalizations of the actual events or possible events.  Between each tale is a summary of the Ripley’s exhibit the story was based on, and even an extra little fact or two from the Ripley archives. It’s a great framing sequence and gives you a little break in between each tale. The tales themselves are bite-sized and fully contained, suitable for reading all at once or perusing at different times.

A CONTINUATION OF A LONG TRADITION

Ripley’s Believe It or Not first appeared, by name, in newspapers 1923, although it appeared in spirt several years prior. The first comic published based on the strip was a J.C. Penney’s giveaway on 1948, while the first proper comic was published by Harvey Comics in 1953. Since then it has been published by Gold Key, Simon & Shuster, Dark Horse, and IDW Publishing. With the Zenescope, we see a continuation of a title that has been popular with children and adults for close to 100 years.

The framing sequence in this volume is done by writer Ben Meares (Grimm Tales of Terror, Clive Barker’s Nightbreed) and artist Deivis Goetten (Jasmine: Crown of Kings, Grimm Fairy Tales: Myths and Legends). It is done in a very un-intrusive way and easily slides you unto the rest of the stories in the book. Solid writing by Mears and niece art by Goetten make it a nice sequence.

“A Tale As Old As…” is by writer Howard Mackie (Ghost Rider, Spider-Man) and artist Hakan Aydin (The Lady and the Lost World, Grimm Tales of Terror). This story of Pedro Gonzales and his life with the condition of Hypertrichosis was been pointed to as the inspiration for the tale of Beauty and the Beast and even validation of the existence of lycanthropes. Mackie takes his tale and puts it within its own framing sequence as a young woman relays the story to a scared servant. The art by Hakan Aydin very good here, and he displaces the condition without falling to the tropes of horror and revulsion. All around a very well done telling.

“I’ve Been Working on the Railroad) by writer Fox Kavanagh and Daniel Maine’ (The Consultant, Achilles, Inc.) is probably the most atmospheric of the tales, thanks to the artwork of Maine’ and the storytelling of Kavanagh. Colorist Fran Gamboa and J.C. Ruiz successfully use an aged look to the paper, along with a muted color scheme, to relay a sense of age to the story. Kavanagh, in what I think may be his first published comic book story, gives us a great look into the possible life of a man with suffered a horrendous accident and was changed by it.

The other tales, “The Ride of His Life” by Dale Mettam & Allan Otero, “Mother Nature” by Victoria Rau and Pat Broderick, and “49 Lives” by Mears and Marcelo Basile, are all entertaining in their own right and well worth the price of admission. The Fact Pages by Mears and Renzo Rodrigues not only break the tales up nicely, but they give that feeling of true Ripley’s Believe It or Not. A nice touch that lends further enjoyment to the title.

BOTTOM LINE: YOU WILL BELIEVE IT… OR NOT.

I was introduced to Ripley’s Believe It or Not by the Gold Key Comics in my childhood barber shop and the television show hosted by actor Jack Palance in the early/mid-eighties. The Dean Cain hosted television series of the early 2000’s was a treat as well, and I’ve been to several of the Ripley’s Odditoriums and Aquariums over the years. This book, with its retelling of famous Ripley facts and tales of the weird, is a nice continuation of that history. It is one of the few Zenescope titles I have found which would be suitable for nearly all ages. There is some language which is censored out in classic comic style, but none of the tales are over the top in gore or horror, although some may skew a little toward older children. Overall it’s an enjoyable title.

RIPLEY’s BELVIE IT OR NOT #1 is a solid entry into not only the collection of Ripley based comic books, but in the Zenescope Entertainment publishing catalogue as well.

Ripley's Believe It Or Not! #1

Great tales of the weird and bizarre, with their feet set firmly in real world events. Great for fans and newcomers alike.