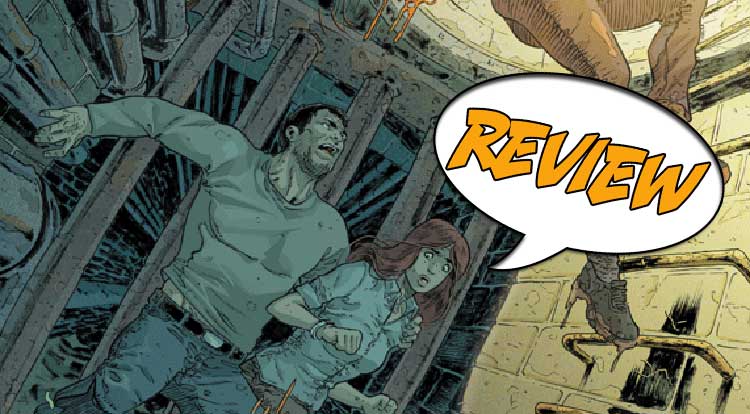 Plans begin to reach their fruition as cross and double-cross come into play as Bax and Dr. McHome seek to re-enter the city in search of a cure against the deadly sun in Eclipse #11. Previously in Eclipse: A deadly solar flare presaged global catastrophe, as humanity became victim to sunlight.  In the time since, the remnants fight for control of the remaining resources, skulking in the shadows and night and trembling in fear at the idea of dawn.  A few seek a cure, and an albino may hold the key to that cure, but before that can happen, the rebels must escape the depredations of Solarity in Eclipse #11.

But that isn’t the way of fiction of this sort, as we see in Eclipse #11.  The organization known as Solarity seeks to maintain its tenuous control on the city, while the rebel elements try to dislodge them and seek a cure.  All through the issue, ably scripted by writer Zack Kaplan, there is an awful feeling of again seeing humanity dig itself deeper and deeper into a hole.

Bax and Dr McHome’s mission outside the city has failed and now they’re trying to re-enter to find a car so they can escape once and or all.  The Albino, whose blood holds a cure, is regarded cynically by Solarity as a threat to their hold on the people in the city.  And Rose, whose father controls Solarity, has a difficult choice to make.

We’re near the end of the road with Eclipse #11.  The early issues dealt with the fallout of the terrible change to the sun, and the devastation wreaked on humanity.  We’ve seen how Solarity jealously guards its control of the meager resources left, and its struggles against rebel elements.  There’s a disheartening acknowledgment that human nature, base and brutal as it is, won’t rise to the challenge of uniting in the face of catastrophe.  Instead of reaching out to find and sustain that common humanity, too often, as in this book, we see characters acting in brutal desperation to maintain their tiny kingdoms, and the carnage that ensues.

All of this is par for the course in this sort of scenario.  We’re approaching the endgame now and Eclipse #11 very much feels like the final pieces are being placed on the board, ready to be dispatched in service of the plot.

While the plot ticks all the boxes, the real hero in this issue, indeed the entire run so far, is the art and the coloring.  Giovanni Timpano does magnificent work depicting in widescreen the remnants of human society.  Cityscapes, packed with abandoned vehicles and ruined buildings, predominate across all the issues, conveying how fragile human civilization is in the brutal onslaught of a simply change in the nature of physics.

Newish colorist Flavio Dispenza spends several pages in the end matter of Eclipse #11 describing how he goes about his work.  Colorists very rarely get a mention – like the weather, they’re simply there.  But without Dispenza’s dedication and talent, the Timpano’s artwork would lack the depth and range a book like this demands.  Looking at the black and white pages reproduced at the back, and compare them with the coloring and shading Dispenza brings to each image, and the difference is (pun intended) night and day.  Characters come to subtle life with the addition of simple tones.  An interrogation scene becomes a tense back and forth, as shadows bring faces and emotions to life.

BOTTOM LINE – BRING YOUR SUNSCREEN AND TRUST NO ONE

Books like Eclipse #11 aren’t everyone’s cup of tea.  It often makes for depressing reading, even if it is safely packaged in the form of a comic book.  Zack Kaplan’s serviceable script performs as to expectations, the overall feel of the issue raised much higher than it perhaps deserves by the outstanding art and coloring.