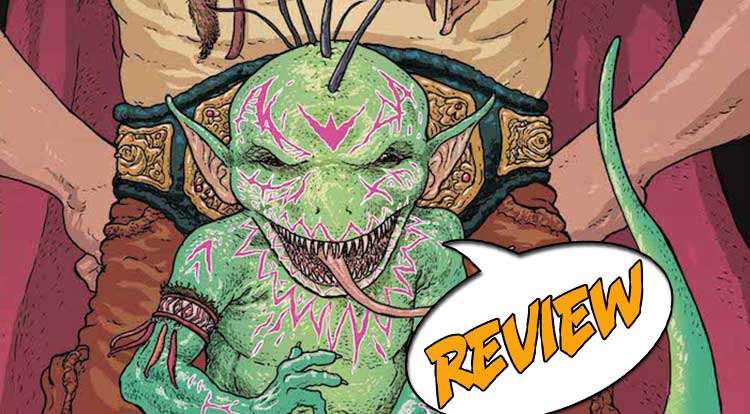 One of the most incredible experiences of their lives, and the young people of Devil’s Fork, AZ realize that no one would ever believe them. They resolve to go their own ways and leave it, but fate works in funny ways. Previously in Border Town: Frank is the new kid in town, that town being Devil’s Fork, AZ.  Weird things have been happening and racial tensions are high. The town is right along the border with Mexico, but that isn’t the only border it’s near. The supernatural border between our world and the Mexican underworld is thin and mythical monsters are wreaking havoc!

Border Town #2 starts out a while in the past with a younger Quinteh refusing to go to school because he’s scared. His mother tells him a story about his Kiowa ancestors setting their souls aside and making room for fierce spirits, when they needed to. If Quinteh doesn’t want to go to school, he doesn’t have to, but who will go in his place? Quinteh already is a huge fan of El Diablo Verde, so he puts on his luchador mask to go to school. And now we know a little more about Quinteh.

This also provides a nice transition to where Julietta, Frank, and Aimi, along with Quinteh, are talking about what to do next. Blake can’t snitch on them without opening himself up to trouble, and they likewise cannot snitch on him. Besides, who would ever believe them about the shape-shifting monster they all saw? They’re still kids. So that’s that – they go their own ways and agree never to tell anyone or talk about it. It never happened.  As it so happens, Blake also goes home (a home stockpiled with survivalist supplies) and lies, telling his dad he was at the library and hiding his wounds.

Meanwhile, in the realm of Mictlan, the Lord of the Dead is not very happy with the little chupacabra who is running away. He orders his subjects to catch him before he gets to the crack in the border between worlds. This introduces a fierce panoply of beings from Latin American folklore chasing him. The chupacabra, by jumping between worlds, is unwittingly weakening the structural integrity of reality. They are too slow; the chupacabra makes the jump, and Mictlantecutli forbids anyone else to go, other than his two captive chupacabras.

As we would anticipate based on last issue, seeing these three causes people in town to interpret them as being different things that they fear. For example, someone on TV reports them as “Godless hippie scum.”  Quinteh sees this, but he sees chupacabras, and has a realization – like him, their true selves are hidden behind masks. He races outside.

Julietta, Aimi, and Frank also hear about this and realize that it’s the creatures again. They all race out and, in the fine tradition of comedic timing, literally run into each other. They find Quinteh who is fighting chupacabras, or rather, saving the one who was being beaten up by the other two. Aimi assumes this one was the runt of the litter and she grabs him and runs. Soon they’re all running aimlessly. Or is it aimlessly? The old lady at La Botanica – an herb store (we met her briefly last issues) urges them inside. As the two chasing chupacabras hurl themselves at her windows, she tells the kids that she was expecting them. And she knows Frank by name. And says she and his family go way back. What have they stumbled upon now?

Border Town #2 is lovely to look at, and there is a lot of detail in the art. Character hair, in particular, is very striking. Julietta’s hair is textured; Blake’s dad has shaggy hair and a beard to match; Aimi’s hair is straight. Similarly, folds in skin and clothing are detailed with an equal amount of care. It gives the art a lot of depth.

When this degree of detail is applied to the nightmare realm, everything really pops, especially with the color. Mictlantecutli is mainly skeletal, but his head is a terrifying fusion of a couple skulls and a more than generous amount of teeth. The portrayal of the other denizens of his world, across a double splash, is a feast for the eyes. It is fascinating to look at, and I would not want to see any of these guys in my nightmares.

We learn a little more about the young people at the heart of this story. When the chupacabras and running rampant again, we see each of them at home in their rooms. This is a prime example of how so much can be communicated through images alone – we absorb so much more about each of them with a few shots of their surroundings, and it keeps the story tight.

I like Border Town #2 on so many different levels. It is tense and dramatic. It touches the lives of teenagers in several different situations at home. The underworld is vivid and the characters there are fascinating. The tie-ins with real-world issues is undeniable but I think that makes the story all that more compelling.

I like Border Town #2 on so many different levels. It is tense and dramatic. It touches the lives of teenagers in several different situations at home.