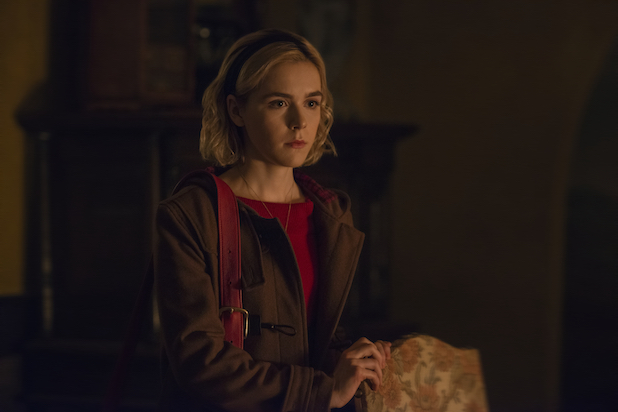 The Chilling Adventures of Sabrina trailer has arrived

By Stephen Schleicher on October 3, 2018 0 Comments
CHILLING ADVENTURES OF SABRINA

The Chilling Adventures of Sabrina is one of the best comics out there right now, and we’ve been waiting to see how Roberto Aquirre-Sacasa’s tale would translate to a live action series. We’re about to find out as the first full trailer for the Netflix series has arrived. Her name is Sabrina Spellman.

Half witch. Half mortal. On her 16th birthday, Sabrina (Kiernan Shipka) has to make a choice between the witch world of her family and the human world of her friends. With her aunties (Miranda Otto, Lucy Davis), her cat Salem, and her boyfriend Harvey Kinkle (Ross Lynch), Sabrina will face horrors and new adventures in the mysterious town of Greendale. From the executive producers of Riverdale comes a haunting new tale. Chilling Adventures of Sabrina premieres October 26. Only on Netflix.

October is going to be a great month for watching series on Netflix!