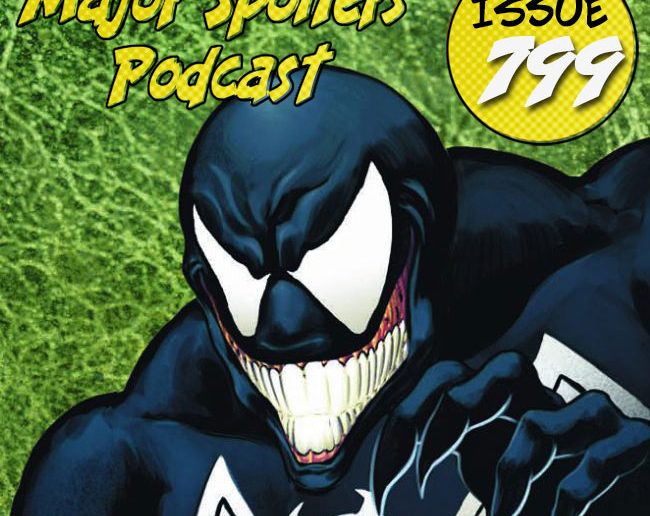 By Stephen Schleicher on October 3, 2018 0 Comments

Venom is in theaters and in our thoughts this week, as we take a look at Spider-Man: Birth of Venom. Plus, Kathleen Kennedy is in the news, and we review Heroes in Crisis #1, The Terrifics #8, Artifact One #1, and Blackbird #1. Plus, what the heck is an A-Team?

The Terrifics find themselves stuck up a cosmic tree with the newly rediscovered Tom Strong—and the fire department ain’t coming to rescue them! The team gets split up while trying to escape this devious trap set for them by a mysterious enemy known as Doc Dread, and they wind up in a bunch of weird dimensions trippier than a spin on the “Yellow Submarine”! Is there a cure awaiting our afflicted adventurers at the end of this other-dimensional adventure? Or will Plastic Man, Metamorpho, Phantom Girl and Mr. Terrific be trapped in Tom Strong’s stronghold peddling snake oil instead?

When tragedy strikes at the center of her world, Remi is forced to leave behind everything she holds dear in order to discover the truth behind her life’s upheaval—all while escaping the near infinite resources of the ruling clerics of faith that seek to not only bring her to justice—but end all traces of her existence!

Major Spoilers Poll of the Week: The A-Team Conundrum

Spider-Man: Birth of Venom
Writer: Various
Artist: Various
Publisher: Marvel
The Beyonder’s Battleworld might seem a strange place to get new threads, but it’s Spider-Man who becomes unraveled when his shape-changing costume attempts to darken his life as well as his fashion sense! But ridding himself of his riotous raiment proves an even greater mistake when its alien enmity bonds with mortal madness to form our hero’s most dedicated decimator! Plus: the first appearances of Puma and the Rose! Mary Jane Watson’s startling secret! And the debut of the battling…Bag-Man!? Guest-starring the Black Cat, the Fantastic Four and more! Collects Secret Wars #8; Amazing Spider-Man #252-259, #298-300 & #315-317; Fantastic Four #274 and Web of Spider-Man #1
CLOSE
Contact us at podcast@majorspoilers.com