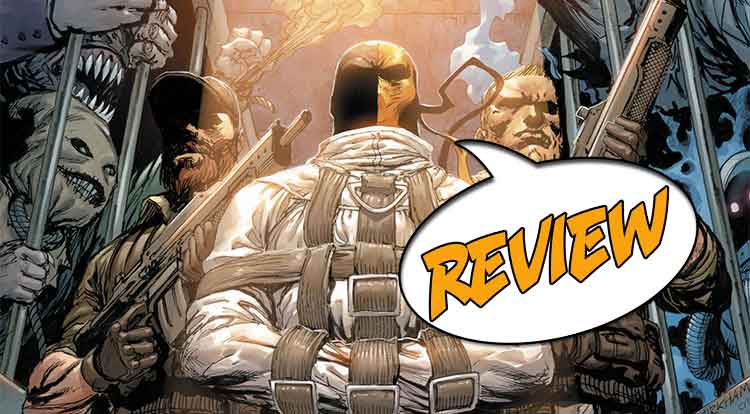 Deathstroke. His name drives terror into the hearts of his enemies the world over. This master assassin and mercenary is one of the most feared people on the earth. But what happens when he is trapped in one of the only places on earth where that fear is meaningless? Let’s find out in Deathstroke #36 from DC Comics. Previously in DEATHSTROKE: After Slade was betrayed by his ex-wife, Adeline, and his only friend and most trusted confidant, Wintergreen, he finds himself incarcerated in the Elizabeth Arkham Asylum For The Criminally Insane. Now he must decide how best to escape, and if he should.

A MAN MAKES HIS OWN PRISON

A host of Arkham inmates stand around Deathstroke as the Riddler lies bleeding out at his feet, Slade’s knife wet with his blood. As they attack, Slade tries to remember how he came to be here, his last memories being the conclusion of his Chinatown battle and being checked in to Arkham Asylum. Mr. Freeze, Scarecrow, Solomon Grundy all fall before his blades, bullets, and hands, until his sword slices across the throat of Dr. Destiny, and he discovers not John Dee under the mask, but his own son, Jericho. As Two-Face takes him out at the knees, Zsaz delivers what would be a killing stroke. Would be, if Slade Wilson was not, in reality, waking up on the floor of his Arkham cell. It’s been 22 days since he was checked into Arkham against his will.

He’s not alone. He sees his friend Wintergreen, in the prime of his career and looking young and able, but this is not real, or is it. This Wintergreen is either the product of a neural implant capable of acting as a digital assistant/database, or a product of his own insane mind. The jury still seems to be out on that. But even as “Wintergreen” produces schematics of Arkham, complete with escape routers, Slade beings to wonder. If the neural processor is fake, what about the drugs which are suppressing his powers, including his amazing memory? If Isherwood was really lying about the implant, how does he manage to access his memories without his powers?

Meanwhile, in a Brooklyn apartment, Hosun finds his wife of convenience, Rose Wilson, bleeding on the floor of their bathroom. Willow, the ancient spirit of a Vietnamese warrior princess, has possessed her again, and used her to advance her agenda of destroying the White Lotus Gang.

Slade knows nothing of this, however, as he prepares to engage in his virtual reality group therapy session with some of the most dangerous criminal lunatics currently being held in Arkham. This session will help him determine his next move, escape his jail or stay and discover more.

IN A COUNTRY OF THE BLIND, A ONE-EYED MAN IS KING

This book takes place after issue 29 of the series. For the previous 6 issues, we were given the Batman versus Deathstroke event, well worth the read by the way, so there was a little disconnect when this started. However, Christopher Priest (Black Panther, Conan the Barbarian) slides right back into the story with little to no problems. You are brought up to speed and then the tale takes off. He takes into account that Slade has been drugged and incarcerated within the asylum for several weeks, and the character’s voice mirrors that. This is a Slade on the edge, he is almost broken, but at the same time strong enough to refuse to break. Whether he has an implant or not, if he is insane or not, he will not give up and will make sure that he comes out on top. Like Batman, Slade considers himself a loner. Also like Batman, Slade has not only a real family built a defector family who have gathered around him. This is something Slade needs. His supporting characters enable the expansion of his tale beyond that of “Slade is a badass” to “Slade is a badass, but he might kind of sort of care about others in an odd way.” I may also be totally off on that, but either way, Christopher Priest’s Deathstroke is a badass.

Ed Benes (Justice League of America, Gen 13) and Fernando Pasarin (Green Lantern Corps, Justice League) make for a good visual team. I can only assume that they split the art duties, but my eye is not familiar enough with either of them to be able and differentiate which one does what pages. If I had to guess, I would say the opening sequence was Benes and the rest was Pasarin. I’m not positive, but that’s good. They are evenly matched skill wise and their art complements each other, allowing for Priest’s story to be told seamlessly, with no jarring feel of a style change. It’s good, it’s dynamic, and it works.

While it may seem that the “hero in prison” story is in vogue right now, this one sells itself a little differently. While the heroes involved in prison stories are usually there due to the machinations of their arch-enemies or to uncover some nefarious plot, Slade ends up in an insane asylum because his best friend and ex-wife think he needs the help. That sounds odd, but strip it away and it is the heart of the matter. Slade is not stable and despite his hardened exterior he seems to be aware of that somewhat. Add in the “Jiminy Cricket” effect of the virtual Wintergreen and you have a character that will either accept the help, or try and break every nose that is stuck in his business. Guess which will work out to the reader’s advantage.

DEATHSTROKE #36 is the first chapter of a new storyline by one of the greatest comic writers currently in comics, writing one of the iconic anti-heroes. This is a match made in heaven.

A great jumping on point for new readers with enough backstory to fill them in but little enough to keep it moving. Check it out.