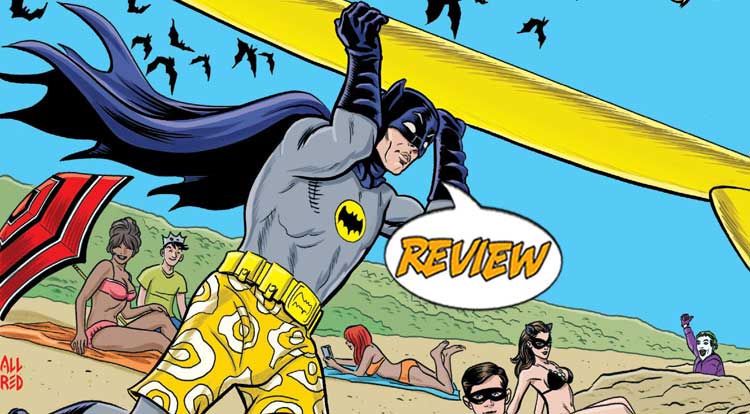 The Riverdale Redhead meets the Caped Crusader, and no one will ever be the same!  Your Major Spoilers review of Archie Meets Batman ’66 #3 awaits! Previously in Archie Meets Batman ’66:Gotham’s villains have infiltrated Pop’s Chocklit Shoppe to enact their plans of mind control!  But when one of Pop’s best customers sees the action taking place, will he be able to let the others know, or will the joke be on him?

The Joker, The Penguin, The Riddler, The Siren and Catwoman (Julie Newmar edition) have infiltrated Riverdale and taken over Pop’s Chocklit Shoppe as their base of operations.  The protective dinerman has driven away all the rest of his customers, which is especially upsetting to Jughead Jones, who is (you should excuse the expression) Jonesing for a burger.  At the same time, Dick Grayson and Barbara Gordon are ingratiating themselves with the teens of Riverdale High in the hopes of finding out what’s going on with the adults.  When the see Mister Lodge with a very specialized umbrella, clearly under mental control, they call in Batman for backup, but the Bat is busy besting the Bookworm with his own dizzying knowledge of literature.  As the villains set their sights on Dilton Doiley, the only mind sharp enough to improve their equipment enough to affect teenage minds as well as grown-ups, The Joker captures a snooping Jughead, threating to starve him unless he helps them to control the minds of his friends!

THE ART IS…  OFF-PUTTING

For some reason, this issue’s art features oddly bulbous takes on Archie and Betty from Dan Parent, even though his Barbara Gordon is adorable.  The inconsistency is really noticeable when Parent (who is an Archie penciler from way back) draws Adam West Batman in battle with the Bookworm.  Parent has a great eye for detail, even making sure to render Cesar Romero’s mustache, but for some reason, his Archie, Juggy and Betty are truly unpleasant to look at.  This issue has a clever little plot, although there are a few too many players in motion with six villains, three heroes, all the kids of Riverdale and Reggie running about doing the bidding of The Riddler just to be a jerk.  Even with all that, though, there’s a lot of silly fun to be had in these pages.

BOTTOM LINE: EVEN WITH WONKY ART, IT’S A GOOD READ

Archie Meets Batman ’66 #3 has a few problems that keep it from being a slam-dunk, but still advances the plot well and has some strong visuals (Batman leaping through the closing wall to enter Bookworm’s lair is a pretty neat shot) and the crossover hook has enough pull to earn 3 out of 5 stars overall.  The fact that DC has finally started actually leveraging the pop-culture impact of this book to their advantage is pretty amazing, to be honest, and now I’m just awaiting the inevitable Batman/Monkees/Star Trek/Battlestar Galactica crossover.