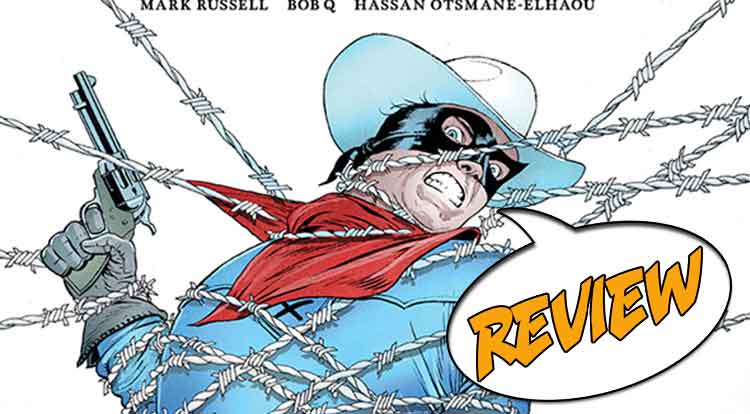 Without his trusted friend and companion at his side, The Lone Ranger must face a group of men planning a range war within the confines of a small Texas county. But they raise the ire of the masked man when they kill with impudence, spurring the Ranger into action. The Lone Ranger #1 from Dynamite Entertainment is out October 3rd! A CATTLE WAR IN THE PLANNING

In 1887 Deaf Smith County, a cowboy and his partners are taking their herd of cattle across the plains when they are stopped by a barbed wire fence in a location where it should not be. As the lead cowboy leans down to cut the fence, another man stops him. A dispute arises on the placement of the fence, and shots are fired. Those shots are heard by a man known as The Lone Ranger, sitting under a shade tree, enjoying his evening meal with his horse. As he rides out to investigate, he discovers one of the three cowboys, dead, bleeding over the barbed wire.

Further away, a group of men meets for a dinner at which they discuss their plans to promote one of the dinners as a potential new state senator. That man goes into great detail in regards to how the time of the range roving cowboy and the wanderer Indian is done, He tells of a plan where they will divide up the lands of Deaf Smith County along their own property lines, lines defined by barbed wire. “But is it legal?” asks one diner. “We will make it legal,” another replies.

Unknown to them, the Lone Ranger stalks the property, having trailed the culprits of the cowboy’s murder to the ranch, and he frees those who the assailants had taken captives. He has been stealthily eavesdropping on the meeting, and knows that something must be done. As the bullets fly, he takes the first steps to reuniting with an old friend, and stopping a nefarious plot.

This is the first issue of the third volume of The Lone Ranger series from Dynamite Comics. This issue is written by Mark Russell (Exit Stage Left: The Snagglepuss Chronicles, Cave Carson Has A Cybernetic Eye) with art Bob Q (The Green Hornet ’66 Meets The Spirit, Kings Quest) and marks a new chapter in the story of the Lone Ranger. Mark Russell introduces us to a tale which involves politics and a potential range war, a truly alone Lone Ranger, and dastardly men of power preying on the weak. The power players behind this plot are truly despicable, calling forth the sort of sentiment which was used to stir the hearts of the average men of the day into action against those who sought to bring a change to their way of life.

The fact that such a plot would have been hatched at all was not uncommon and the use of Deaf Smith County (pronounced DEEF) was a great little nod to history. This Lone Ranger does not seem to be as dark as was previously brought to us by Dynamite and, this first issue at least, has much more the feel of the original radio series. The Ranger seems a little lighter hearted. Instead of going in a gunning down all those who have hatched the plot, he sets up a container of conveniently available gunpowder to cover his escape before going out to seek assistance. Overall the story has a lighter feel than the heavy subject matter which Russell dealt with in his previous work. That said, there are a few pages which seem placed there to allude to and solidify the evilness of the landowners’ plans, but I think they can be forgiven as an attempt to make to spell out with no doubt that these are bad men. Anachronism’s aside, it looks to be setting up a fun and adventuresome tale of the old west

Artist Bob Q lends his art style to this more light-hearted approach. It is over the top in some ways, and there seems to be a gleam in The Ranger’s eye, even as he makes a fiery escape from the ranch the evil masterminds are meeting at. His is a Ranger who calls back to the competence of Brace Beemer and Clayton Moore, but with a youthfulness that makes him still seem to be in his prime, and a bitterness that brings its own regret. Good art, but not without its own anachronisms, but good art nevertheless.

Coming out of having recently read the excellent Exit Stage Left: The Snagglepuss Chronicles, I was prepared for a much grittier Lone Ranger from Russel. Luckily, we get a more light-hearted feel with this tale and in general, it remains light throughout; despite a murder, explosions and bullet wounds, until a little darkness hits at the end. The villain, or tool of the villain, delivers a truly verbose monologue so grandiose as to be laughable. This is a nice respite from the dark, machismo of many of the previous Lone Ranger stories. Combined with the art, it makes for pretty good entertainment. It’s not a campy fun ride, but the sense of dark dread the character has cultivated of the past few years is lightened considerably.

THE LONE RANGER #1 looks as if it will be a change of pace to the heavy atmosphere of previous volumes, and that is a welcome change. New readers should feel welcome.

Problems, yes, but the feel of adventure makes up for it and it looks to be a fun start to a solid ride. Hi-Yo, Silver indeed!