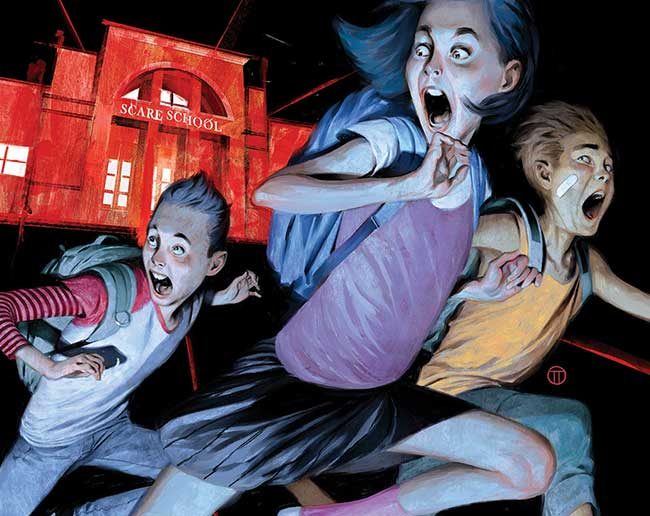 In JUST BEYOND: THE SCARE SCHOOL, the first original graphic novel in the series, three 12-year-olds in strangely old fashioned clothing have appeared in modern times, creeping through the empty halls of Scare Middle School, trying to escape a cyborg creature called a Drogg before they are dragged back to somewhere Just Beyond. Now, three modern day students, Josh, Jess, and Marco, are drawn into this terrifying mystery about why their school doesn’t just feel like the worst place ever—it might literally be the worst place imaginable in this world…or any other!

“Kids spend a lot of time in school. So it’s the perfect place for scares. What if everything you thought you knew about your school was wrong?” said writer R.L. Stine in a press release from BOOM! Studios. “What if your school held a secret so terrifying it could threaten your life? That’s where the idea for THE SCARE SCHOOL began. Where the story ended surprised even me!”

“R.L Stine’s books were something we grew up with (there was always one or a dozen around the house), so when we were approached with the chance to work with him on THE SCARE SCHOOL, we jumped on it,” said artists Kelly & Nichole Matthews. “Getting to design a cast of characters and creatures from the ground up is always fun, and getting to go a little wild on how scary they are is even better. This book will leave you in stitches as many times as it will leave you screaming! We hope fans will enjoy all the jumps and frights as they enroll for a spooky good time in Scare School.”

Just Beyond: The Scare School is scheduled to arrive in September 2019.