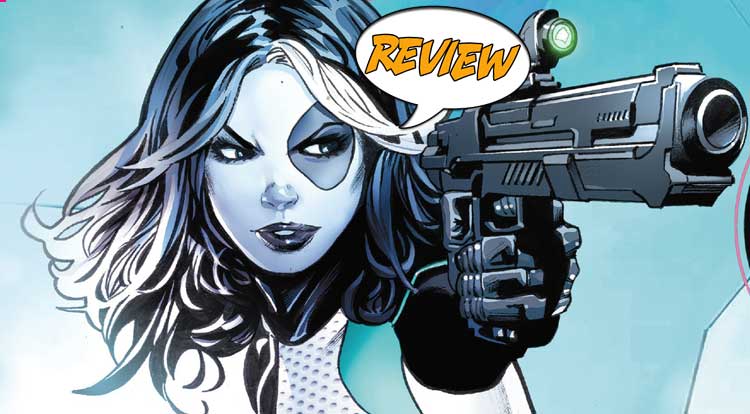 Ever wondered what Domino does in her spare time?  Get ready to find out!  Your Major Spoilers review of Domino Annual #1 awaits! Previously in Domino: Neena Thurman’s never worked alone…  She keeps her friends close and her lovers closer!  FINALLY REVEALED: the origin of Domino’s posse!  Colossus and Domino rekindled?  Cable takes a bath!  Plus: Domino’s not the only mutant wearing her X-gene on her sleeve…  don’t miss the first appearance of the RejeX!

THE FIRST STORY IS THE ONE I’VE BEEN WAITING FOR

In her twenty-odd years in the Marvel Universe, Domino has seldom been a solo act and she’s seen a LOT of stuff go down.  This issue opens with the story of how she and Diamondback recruited Outlaw to their kinda-sorta team, a cute little story that shows off the balance of personalities in the trio and also just how powerful Outlaw is.  The second story is narrated by Cable and actually ties back into a long-ago horrible X-Force story involving forced perspective and a bathtub, showing us a little bit of Cable’s interior monologue and his association with Dom, followed by a story in which she reunites with her ex, Colossus, on the night after his wedding collapses, with Domino providing a little fight with Crimson Dynamo to try and cheer him up.  Finally, we see the first meeting of a support group for mutants who can’t pass as human, featuring a little pathos, a little comedy and the only story EVER WRITTEN that seems to give a damn about former mutant Stacy X, even those written by her creator.  After such a long day, Domino ends up flopping in her bed with her cute puppy, an ending that seems perfectly in-character for her.

In the old days, every summer gave us one-shot annual tales that gave us fun, unusual takes on the characters we knew (like that X-Men Annual where the Impossible Man showed up and stole the mansion.)  This is a worthy successor to those books, taking our character and fleshing out bits and pieces of her huge, patchwork world and delivering strong drama, romance and action throughout.  The moment where Domino and Colossus start kissing and she admits that it’s absolutely a bad idea, but it just feels good is one of the rare moments where a comic have addressed sex and had it feel normal, adult and responsible.  Best of all, none of the art teams drop the ball, from the smooth lines of Ibanez’ opening story to the rough inking of Gedeon in the Cable chapter, it’s all well-rendered, expressive in form and face, and there’s a robot/SUV hybrid with a Sentinel head on top.  That’s worth the price of admission, if you ask me.  The whole book looks great, with Aburtov’s coloring and Cowles’ lettering as the connective tissue holding Domino Annual #1 together.

Domino’s solo book has been a truly surprising treat for me, showing us a mutant who is somehow also a real woman with multiple facets to her personality and a wry sense of humor, and this whole annual shows off the best of the character.  Domino Annual #1 takes one of the most surprising stars of 2018 and gives us several good stories, with well-done art across the board, and even the parts that don’t quite land in terms of story aren’t a deal-breaker, earning 3.5 out of 5 stars overall.  If you ask me, just the fight between Domino and Outlaw would have been a winner, but this issue gives us much more, including a charming Nightcrawler.  What more could you ask for?

A nice mix of stories and art styles, with a couple of rough moments but nothing that quite brings the whole thing down. Plus, the origin of The Posse!