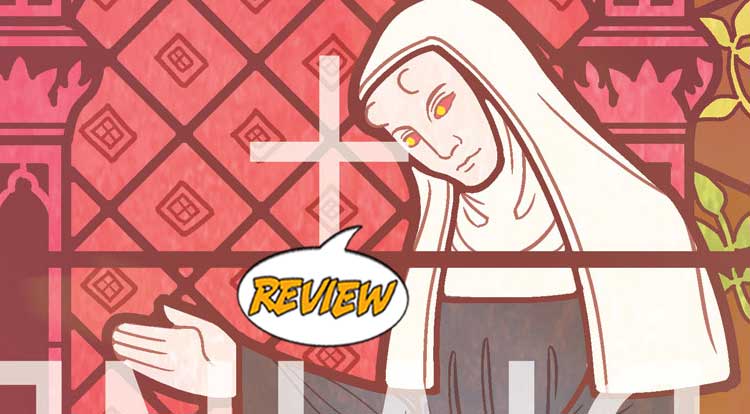 It’s twenty-two years since the Black Death devastated Europe…  Your Major Spoilers review of The Wicked + The Divine: 1373 #1 awaits! Previously in The Wicked + The Divine: Every 90 years, twelve gods return as young people.  They are loved.  They are hated.  In two years, they are all dead.  In the year 1373, penitent nun Lucifer is preparing to hear the confession of penitent murderer Ananke…

Yes, everyone will be sorry.

We open with 14th Century Lucifer, a young nun with vestigial horns and blood-red eyes being summoned by a messenger from another place, a young woman who needs her help.  A long journey entails, during which they encounter a group of flagellants infected with plague who reveal the true horror of this particular god’s incarnation.  (I’ll say this:  Seldom has a Mature Readers flag been more necessary and absolute.)  Once the journey is complete, though, Lucifer finds herself in the presence of Ananke herself, who is amazed that Lucifer is still alive past her “expiration date.”  As the last of her Pantheon, Lucifer has seemingly lasted thanks to her faith, but Ananke has called her for that very reason.  She wants to confess.  With no chance of being caught, Ananke lays out the truth, including some information new to readers of the modern WicDiv storyline, explaining exactly what’s been going on with her secret cave and that thing about the deaths of Tara, Inanna and 2013 Lucifer that I don’t talk about in case readers are a couple of issues behind.  Worst of all, though, is Ananke’s confession that not only did she and the previous Pantheon CREATE the Black Plague, she herself carried it across Europe to kill as many people as possible, leading Lucifer to offer her a horrible absolution.

Ryan Kelly’s art is a far cry from McKelvie’s silky-smooth lines on the main WicDiv title, but they’re perfectly suited to the filth and disease and corruption of The Wicked + The Divine: 1373 #1.  Lucifer encounters lepers, plague victims and various and sundry everyday horrors, all of which are given visceral, disgusting life by Kelly.  Ananke’s plague-ridden face is almost more terrible than the actions she admits to in these issues, and even though the bulk of the story is two women having a conversation, it never feels static or boring.  Best of all are the moments that I didn’t expect, such as the deep characterization allowed to this earlier Lucifer, giving us not only an explanation of how and why she endures, but background to explain it all.  Add in the revelations regarding Ananke that clarify what we know about the story so far, and this makes for a very satisfying read

BOTTOM LINE: A MUST-READ FOR FANS OF THE MAIN TITLE

In short, this issue is both a stunning stand-alone story full of character and conflict and an important piece of the puzzle that is The Wicked + The Divine.  As the series winds down to a close, The Wicked + The Divine: 1373 #1 deepens our understanding and delivers some pre-Papal Schism religious fervor all the while making me hate Ananke just that little bit more, earning a well-deserved 4 out of 5 stars overall.  This may be my favorite of the historical one-shots, just based on the strength of the interaction between the final members of 14th century Pantheon.

Unholy deeds, corrupted flesh and an ending that gave me the creeps make for one really impressive package overall.