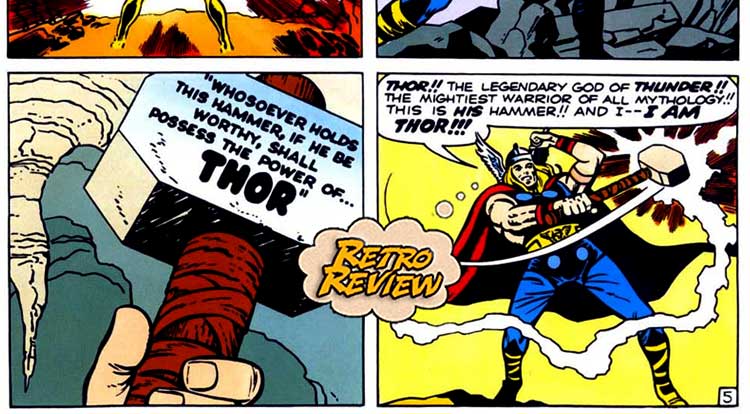 Whosoever holds this hammer blah blah blah…  You know the drill, but do you know the whole story?  Your Major Spoilers (Retro) Review of Journey Into Mystery #83 awaits! Previously in Journey Into Mystery: Starting in 1952, ‘Journey Into Mystery’ was one of several monthly Marvel Comics anthologies featuring tales of the uncanny, supernatural and/or the wickedness of human nature.  By the early 1960s, though, the tastes of the readers were shifting back towards superhero comics, and Marvel editor Stan Lee had found success with ‘The Fantastic Four.’  If you know anything about Martin Goodman, Marvel’s publisher, you know that he never missed a good trend, and so the anthologies started trying out the new-fangled sooper-heeeero stuff.  That doesn’t mean that they deviated from the formula, much, though.  This issue opens with an alien invasion! Witness The Stone Men From Saturn!  Known also as ‘The Stonians’ and ‘The Kronans are usually depicted as orange-skinned, resembling The Thing of the Fantastic Four.  Full Disclosure: My copy is a reprint edition of the original story, as I don’t have eighty-five grand to spare just this second, and I think they’re actually colored orange in the pages of the original.  Occasionally appearing throughout the Marvel Universe, the Kronans are probably best known for native son Korg, who is not only an ally of Hulk during ‘World War Hulk’ but one of the funniest parts of ‘Thor: Ragnarok.’  Their attempted invasion is witnessed by a Norwegian fisherman, who rushes home to tell everyone of the alien menace.  A visiting American doctor, Donald Blake, decides to take a hike out and see whether or not the rumors are true, leading to him witnessing the creatures, running for cover and getting trapped in a cave-in. When his makeshift staff strikes the rock, Donald Black is transformed into a much larger, much more powerful form, and the cane transformed into a war hammer!  He reads the words on the side of the weapon, and Donald Blake realizes that he has become the legendary goddathunda, THOR!  Later stories will retcon these events somewhat, revealing that Donald Blake IS the actual thunder god, cast down to Earth with a physical disability by Odin in the hopes of teaching his boy humility.  Thus, it was Odin who nudged Don to take his Norwegian vacation, planting the staff and setting up this whole charade for Thor to rediscover his true self.  This story, however, makes it clear that, even transformed, Donald Blake is still in charge. Magically, the transformation also repairs his clothing, reties his cravat and replaces his dapper hat in human form.  (Hashtag Norse Magic!)  This story is a really strong art job by Kirby and Sinnott, much better than later Thor appearances, which don’t have the same depth.  Is that the work of Sinnott here, opposed to later inker Vince Coletta?  I’m not expert enough to know, but I can tell you that this is one of the most attractive Silver Age Thor appearances I can remember reading.  A scientist by nature, Blake spends two full pages learning his powers and their limitations before remembering the alien invasion, already in progress! With the first ten pages of Journey Into Mystery #83’s thirteen-page story used up, one of which is just a big splash page with a really cool looking Thor on it, the battle isn’t going to last very long.  But it’s amazing how overpowered Thor is against this menace, tearing through their restraints like tissue paper and ripping into their most powerful defense: THE MECHANO-MONSTER! Those two panels, by the way, are the entire Thor/Mechano Monster battle.  That is hardcore.  The aliens go on the run, disappearing from the Marvel Universe til about 1977, leaving Donald Blake to head home with his new-found cane and secret identity, to build the legend of Thor!  Or rebuild?  I dunno.   Being an anthology book, Journey Into Mystery #83 has two more features, one featuring a murderer who discovers his victim is a flying man from Mercury and another featuring a lion gaining human intellect after being struck by an atom bomb…  I’m not making those up, either.

One of the most amazing things I discovered about this particular comic book is in the timing, with a street date of June 5, 1962, the exact same street date as an equally interesting comic book called ‘Amazing Fantasy #15.’  Even the most casual comic readers will recognize that as the first appearance of Spider-Man, and even though the listed COVER date is different, the first appearances of two of Marvel’s most important characters were on newsstands on the very same day.  With strong Kirby/Sinnott art and a clever, if somewhat fast-paced story, Journey Into Mystery #83 is one of the better Silver Age Marvel first appearances, earning 4 out of 5 stars overall.

A strong opening, one which is notable for the character's first appearance costume remaining nearly unchanged, making for a pretty okay read.