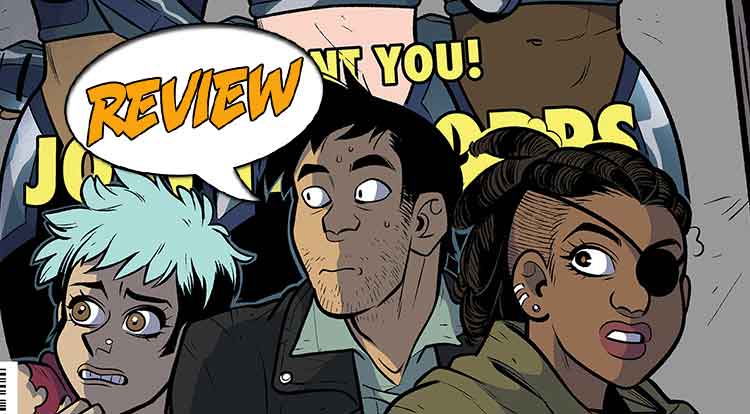 Running the gauntlet at a con to get your badge takes on a whole new meaning in The Long Con#3. Can Dez, Victor and Loren make it through alive? Previously in The Long Con: A cataclysmic event destroyed everything within a fifty-mile radius of the Los Spinoza Convention Center…or maybe not. Victor Lai was sent in to investigate and found his friend Dez still at the Con and still alive.  Thinking everyone outside had died in the cataclysm, the Con has gone on with everyone buckling in for survival. Now that she knows the real world is still out there, Dez hopes to be able to get everyone back out again.

AN IDEA THAT GROWS ON YOU

The premise of The Long Con #3 seems outrageous, until you actually see it in writing. Something about it makes you buy into the idea that it could be plausible. Victor, however, doesn’t buy into this quite yet, until a young woman with a bunch of armed troopers demands his badge. Thinking quickly, Dez yells out a hint in the hopes that Loren, her intern, will hear her. Loren does and sets off a flare gun into a prearranged box of plushies and fireworks to cause a distraction.

The main fandom of this con is a long-running TV show, Skylarks, and many of its offshoots.  (Skylarks, eh? Is this a reference to E. E. Doc Smith’s Skylark of Space series?) The guards are known as Skylarks, and Victor can’t believe it. In five years, the society that has developed here is based around a 1960’s TV show? And this is a deft segue into a flashback to five years ago, when Dez was taking Victor around the Con when it was normal. Or at least more normal than it is now.

I have never been to San Diego Comic-Con, but I have been to GenCon as well as more local Cons of various types. I’m seeing a lot of parallels in this book, which is awesome, and this also makes room to poke fun at conventions and fandom. We see a group of female troopers in armor that leaves bare the midriff AND has a boob window (which one of the troopers explains designates the branch of service). There is also a run-in with a judgey podcaster who talks smack about female cosplayers. I don’t want to give away all the humor here, but there are a couple other wide-ranging pokes.

Dez takes Victor back to her booth, where Loren (the intern) is feuding with the creators of the book, “The Lone Corn.” There’s a bit of a run-in, and then we flash forward to the present again, and we get a little more history. (Despite the time jumps, the narrative is actually pretty clear.)( The goon squads started out as cosplayers, but somewhere along the line got actual military weapons. At first, the Skylarks helped people and everyone worked together to restore order. Then schisms erupted and some groups started vanishing. This brings them to the Salad Saloon, where Dez’s creators can get forged credentials for Victor. That is, until Loren drops in (quite literally). The Skylarks have burned down their place and are looking for them. Then, as the forgers prepare to flee, all are confronted by the Special Guest. And, cliffhanger!

The art in The Long Con #3 just really, really fits the subject matter. It’s a very loose, expressive style with a tendency for large eyes, especially on the women. There is some exaggeration in the facial expressions, but the whole story is so over-the-top that this suits it well. I like the care that has gone into creating not only the TV show (which we see a scene from), but also the cosplayers. While the show bears some loose similarity to Star Trek, it is certainly not a copy and it has plenty of its own quirks.

I like the transition to the past, especially since we take the exact location and position of the characters and essentially time shift them. This really emphasizes not only the time difference, but all the changes that have happened in that time, and it’s a way to do this without exhaustive dialogue. I also like seeing Dez’s creators who have become the expert forgers. We don’t need to waste time explaining how she knows them and why they would do anything for her. There is some clever story construction here.

Another thing I’d like to comment on is when Loren is telling them about the Skylarks’ attack. She does this all by speaking in emojis. We see scenes of what happened, but it is a rather neat way to set her apart and have fun with another way of communicating with the reader.

There’s a great mix of drama and humor in The Long Con #3, especially if you’re a fan of fandom. The pacing is good, the flashbacks are entertaining, and there are genuine surprises thrown in. The concept of the sort of civilization that arises from a mix of congoers is fascinating.

The Con that never ended continues to be full of surprises.