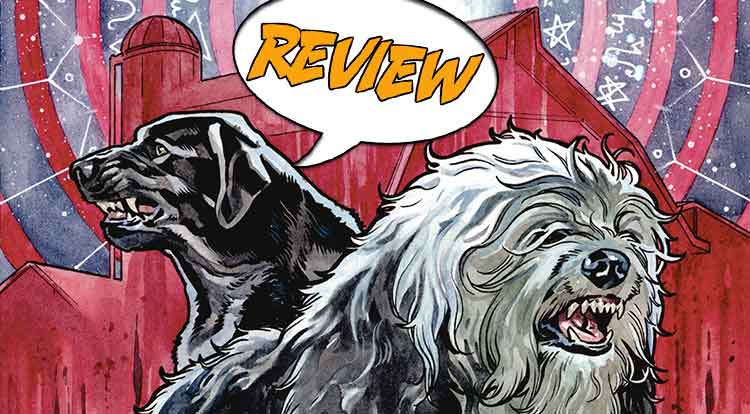 The Wise Dogs are hard at work dealing with occult happenings in their territory. With Dempsey injured and mutant lurkers in the area, can they deal with the problems at Derrington? Previously in Beasts of Burden: Wise Dogs and Eldritch Men: Weird things were happening all over. Lundy, the Scottie, investigates a forest fire and finds it was caused by a salamander, whom he lets go. The Wise Dogs are also attacked by mutant lurkers, suffering some injuries. Even more intriguing, these creatures all had odd similar mystical brands marking them.

Beasts of Burden: Wise Dogs and Eldritch Men #2 begins with Miranda scrying to a cat. They were sharing news, and in addition to the mutant lurkers we already know about, there is a windslither in Burden Hill, which the cat plans to deal with. Meanwhile, the wounded Dempsey is taking out his frustration on lurkers. After a little argument with Lundy, he collapses, bleeding profusely, and the dogs need to get him proper attention quickly.

After a long journey, they arrive at a house where they are met by Huxley, a bulldog, who directs them to bring Dempsey in where Arthur can help him. The dogs wait in the yard. After a while Arthur (a human) comes out to tell them he thinks Dempsey’s okay, but he and Brigid (the healer) will need some rest. I love that the dogs and people can communicate in this world. Emrys, the sheepdog and apparent leader, introduces Triss, the pack trainee, and Miranda, his apprentice. This is a cool take on a pack – every dog has their place, but more than that, a very distinct job. Arthur offers to feed them, and there’s a cute moment where Lundy’s tail wags madly, despite the solemnity of their visit.

The Wise Dogs discuss their situation with Arthur, sharing information. Miranda starts a fire in the fireplace for them, and this sets up a nice moment when she looks at the various photographs above the mantel. She sees one of Emrys with a human. Emrys tells her about him later. These dogs don’t talk much about their companions. He worked with his companion, Jonathan, for almost forty years before he died. This is such a poignant moment.

The next morning Dempsey, still resting, lets on to Lundy that he knows he let the salamander go. Gerda is also left behind for guard duty – Dempsey and Brigid are still recovering, and Huxley is not so young anymore. The reduced pack heads to Derrington and along the way, spot a dead bear with raccoons feasting on it. They chase the raccoons off to get a closer look, but these are no ordinary raccoons. They have human faces with a brand on the forehead and are terrifying. (I think this is because I see normal raccoons all the time, and I would totally freak out if I ever saw one with a face like these.) Some try to dash off, and Lundy dispatches them with his powers. The bear had chewed its own leg off and probably bled out. It is a mossback, and will compost quickly on its own. Lundy advises that they tear the faces off the raccoons so no one sees them.

At Derrington, there is no answer to their howls of greeting. A smell of blood is in the air as they approach the barn where the lurkers are. A dog then comes out to meet them and warn them off, but defers to them. Carver stays with him and the others look in the barn. At the doorway is a dead human who has been ripped in half. But that’s just the start. The barn is full of the bodies of dead animals and humans both.

This is such an interesting world. While it has a lot of creepy things that I would not really like to run into myself, I would love to hang out with these dogs. I also really like that despite their powers and wisdom, they genuinely seem like dogs.

The art of Beasts of Burden: Wise Dogs and Eldritch Men #2 is not a style I’ve seen a lot of, but I love it for this book. There’s a distinctive combination of strong outlines around foreground characters and colors that look like watercolors. There are a lot of atmospheric light conditions in the various scenes as they play out – moonlight, sunrise, firelight – and the coloring accentuates this. The palettes are somewhat muted, even in the scenes with a lot of blood, which gives the whole book a somewhat dreamlike feel (but like both good dreams and nightmares).

The artist clearly knows his dogs. The dogs are our main characters, and they look and move like dogs. They do have a variety of facial expressions, enough so we can read what they’re feeling, but not so much that they look unreal or cartoon-like. The body language is captured well too. When the dogs use their magic and their eyes flare, it looks so uncanny. The detail extends to the settings. Arthur’s house is surrounded by markers with runes on them, and there are other magical symbols.  There are also flowers blooming. It is like a little oasis of peace and safety in a dangerous world. It is a beautiful book.

BOTTOM LINE: AN OCCULT MYSTERY WITH DOGS IS A PERFECT COMBINATION

Beasts of Burden: Wise Dogs and Eldritch Men #2 is a well-spun tale full of great characters and full of mystery and horror alike. The Wise Dogs feel like such a small team to take on what feels like a dangerous enemy, but they are so stout-hearted we can’t help but cheer them on.

Beasts of Burden: Wise Dogs and Eldritch Men #2 is a well-spun tale full of great characters and full of mystery and horror alike.