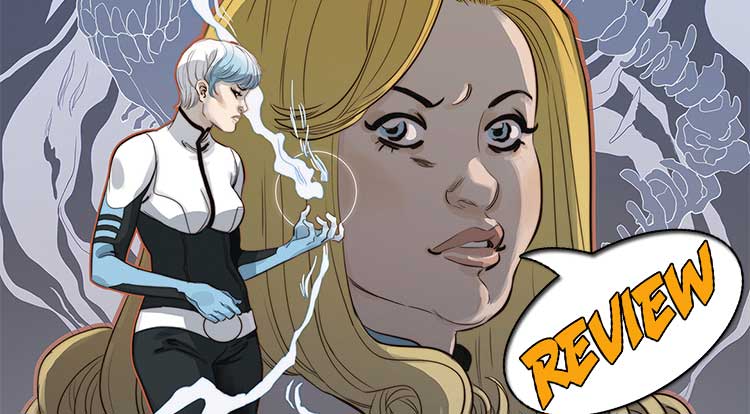 Wanted by the police, Faith has been forced into the open by her own sense of responsibility. But when an old acquaintance comes to her for help, will she be able to cultivate a sense of self-preservation? We find out in Faith: Dreamside #1, on shelves September 26 from Valiant Entertainment. Previously in Faith: Framed for a murder she didn’t commit by a cadre of her enemies, Faith has to stop actively using her powers and her normal identity and retreat into her Summer Smith alter ego. Framed for murder? Enemies join forces to kill her? Yep, in classic superhero terms, Faith has arrived!

While Faith Herbert and her heroic identity of Zephyr may be wanted by the police, Summer Smith still has a job at Zipline as a content writer. In an example of the universe twisting the knife, she must write a story about herself for her employer, but is writing as someone else. Although her co-worker, Paige, offers to take it over, Faith refuses. None of her friends in the field have found any sign of the odd coalition of villains known as The Faithless, so Faith is forced into playing the waiting game. As she makes her way home, she begins to wonder about the responsibility of those with power and those without. Do all people share the same level of responsibility, or does great power mean greater responsibility?

But matters quickly come to a head thanks to an accident on the 101, and Faith decides that she can’t just sit by while people are in possible danger and she has the power to help. This is how she eventually finds herself saving a little girl, being arrested by the police, and fighting a giant kaiju on the highway. Yeah, the universe has a way of tweaking your nose to get your attention.

But everything is not as it seems and before long Faith finds herself agreeing to help an old acquaintance settle some personal demons. In the process, maybe she can settle some of her own.

A HERO YOU CARE FOR

The character of Zephyr was created by Jim Shooter back in 1992 for his Harbinger series. The Faith in that original universe was similar to the one in this one, but not treated as frontline characters. Thanks to a new way of thinking, and the excellent writing of Jody Houser (Mother Panic, Orphan Black) this character feels truer than she ever felt before.

Faith has always been the more optimistic of the Valiant characters, but that optimism sometime held a sort of Pollyanna quality that made you annoyed by the character. Under Houser’s guiding influence, she has become more than a cookie cutter. Faith is now a woman who can hold her own, who is not embarrassed by who she is, how she looks, or what she likes. She accepts her flaws unabashedly and fights past them. In this issue, she considers if it is acceptable for her to hide and discontinue the use of her powers because she is in danger. Do her powers automatically put her at a greater level of responsibility than others and is she ignoring that level of responsibility because of potential inconvenience or harm which may come to her? She answers this question by taking action when others are in danger, even when it results in her detainment by the police. Even the lead up to that detainment gives her an opportunity to weigh her options and what the consequences are for those around her. While she is aware that she is in danger of being arrested, she still thinks of others first. The strong sense of responsibility and what is right and wrong is part of what makes Faith such an enjoyable character. Jody Houser is the voice behind that character, and she should be lauded for bringing it to the fore.

A noticeable change from previous incarnations of this book is the art. Here we have the work of MJ Kim (Ninjak, Faith’s Winter Wonderland Special). Kim brings a manga-influenced style to the issue, and there are multiple uses of the unique language which manga brings to the page. While her panel layouts and flow is much in the traditional superhero style, the facial structure of the characters and the facial structure and uses of varied art styles to represent internal conflict and the use of action lines set its footprint firmly in the manga realm. It is not overdone, but it is used discreetly when it is needed to advance the story. This makes it feel as if she has more of a personal style than some other manga-influenced artist. It’s nice and it doesn’t jump out at you until after multiple readings.

BOTTOM LINE: AN ACTION PACKED START TO A NEW STORYLINE

The story Houser and Kim present her is entertaining and achieves the effect of moving the character of Faith forward. We get to see her internal conflict as well as her willingness to sacrifice herself. No, the character has not become a “dark” Faith, far from it. She takes on the world and the problems it throws at her one step at a time, and while all of her choices may not be great, they are hers, and they are true to the character. It’s a good start to what looks like it could be an excellent story.

FAITH: DREAMSIDE #1 is another well-produced chapter in the life of one of the most outright likable heroes on the market. The story hints at the opportunity for self-discovery but seems determined to keep the character true.

It looks like our hero is going to be putting others before herself once again and that works out great for the reader. Add it to your pull list.