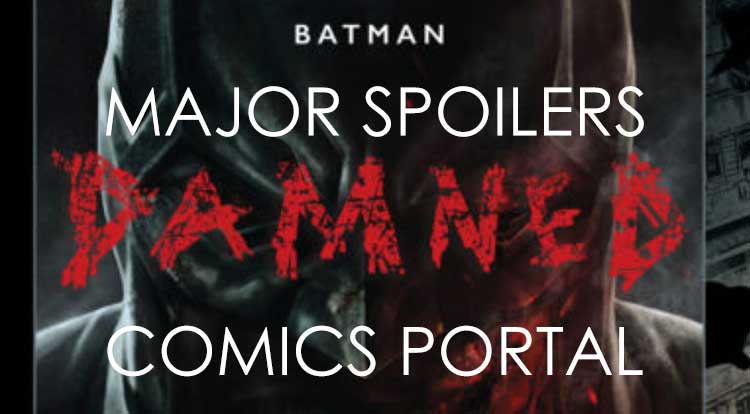 Fans reacted to several things that took place in the previous week. But two events prompted an old feeling that we don’t get it sometimes when it comes to this industry we love.

We just miss the bigger picture at times!

WHAT ARE FANS TALKING ABOUT? While there are have been many thoughtful reviews such as the one here at MajorSpoilers, many fans online and in stores across the nation are talking about something else that was found in Batman: Damned #1 from DC: An illustration that, well, pretty much showed Batman’s “manhood,” as I like to call it.

Here was a serious, at-times dark story that looks like it went someplace that fans have longed to see a Batman story go for decades, and so many people I know aren’t discussing that at all.

Granted, the whole concept of this new line of comics from DC is to be more “adult,” but in story tone, not in that “other” bookstore way.

People now have said that the “DC Black Label” description means you should down one or two “adult beverages” before reading those books. Sheesh!

THAT BORED LOOK ON CAPTAIN MARVEL

Then we get to the new trailer for the upcoming Captain Marvel movie. It’s a big deal because it’s the first time I can think of when a Marvel film has had a female lead. Not Black Widow or Scartlet Witch. Captain Marvel. And it was foreshadowed in Infinity War.

But fans are talking about how she seems to always have a look of boredom on her face throughout the trailer.

Come on, folks, a trailer isn’t the whole movie! It’s way too soon to judge how she’s going to be portrayed in the upcoming movie!

And it’s a breakthrough on many levels, so I would suggest you give her a break… especially at this time! Sheesh!

WHEN YOU LOVE SOMETHING, BE PATIENT! I know that so many of us are absolutely terrified that comics fans will be made fun of for any reason! I know what would have happened if Captain Marvel was TOO emotive in this trailer, TOO happy, TOO angry! We’d also never hear the end of it! Some folks would have been saying negative things about her no matter what!

And that Batman illustration was on one whole panel in what’s a multi-part story! Did you think he didn’t have any male appendages on him? I know a great many people who complain that we have NOT seen it before.

I mean, grow up, people!

Adults I know can laugh at themselves without fear. We should be able to talk about subjects in comics and films related to them without trying to beat critics to the punch, giving them more ammunition!

I try so hard to ignore it when people take the “low road” when it comes to comics. It’s just too easy to make fun of things. However, the more you do that, I believe, the less you respect the very thing you once loved.

If I’m coming across as an “old fuddy-duddy,” as people used to say, it’s because I hate to see wonderful comics projects go down in flames because someone made a single decision that a huge group of fans seized on that would destroy it all in the end. We need more “adult” in the good way comics stories, and we need more women leads in comics films, not fewer! If we come across as people who want the same old thing—angry white males with no sexual aspects to them—we’re doomed to repeat the same old storylines over and over again ad nauseum. On the other hand, watching adult guys snicker at Batman’s private parts, well, that’s what we call juvenile, sadly.

Personally, I LIKE creativity and variety in my superheroes. If Carol Danvers is somewhat stoic during the entire movie, so what? She can be that way, and maybe they want—dare I say it?—character development in the film? GASP! And if we can’t see one whole “manhood” in a Batman comic over literally decades of time, well, maybe we are in need of more maturing.

What do you think about how fans reacted to these two events? Should we engage in this kind of behavior? Not? Whatever your opinions, be sure to share them in the space below!