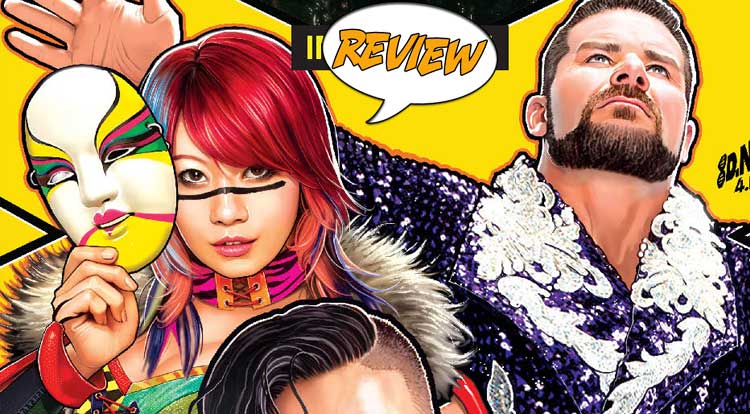 Asuka’s on a rampage, but a former champion is watching her ascension with great interest.  Your Major Spoilers review of WWE NXT Takeover: Into The Fire #1 awaits! Previously in Daredevil: The event keeps on rolling, as The Empress of Tomorrow, Asuka, begins her rise to the NXT Women’s Championship, and Full Sail becomes Glorious thanks to Bobby Roode…

SET IN THE PAST?

This issue opens with a match between Asuka (who is still the undefeated NXT Women’s Champion, even though she lost that title due to injury and was brought up to the main WWE roster in the fall of 2017) in action against Ruby Riott (herself now on the main roster and a former championship contender after Asuka’s NXT exit, I believe) while someone narrates the action.  It’s very strange to see the frozen shots of the ring action that you can see every Monday night, especially given that the art feels much more like a superhero battle than it does the action in a WWE ring, but as Asuka gets the win, we find that the narrator is none other than Paige, scouting for talent in NXT.  Both Asuka and Ember Moon turn her down, but when she tries to float the idea of a stable to Ruby Riott and her pals, they take it and beat her up for her troubles.  As the issue ends, though, she finds Mandy Rose and Sonya DeVille, who agree to join her on the main roster, something that took place in November 0f 2017.

This issue’s cover and promotional material promise Bobby Roode and Shinsuke Nakamura action, as well, but none of that actually shows up in the issue, which could be a problem for those who are looking forward to these stories. For me, though I’m a fan of both the WWE and comic books, there’s little to bring me into this issue.  The art is okay (though the complex textures and colors of the various NXT battle togs feel a little bit wobbly to me, especially Asuka’s mixed prints) but there aren’t a lot of accurate facial representations to be had here.  Paige never looks a thing like her real-life inspiration and the action sequences once again don’t feel like what happens in a WWE ring as much as standard superhero combat.  There are some lovely choices in perspective, though, especially a Paige POV on her beat down.  The dialogue is awkward and workmanlike throughout, and while the behind-the-scenes “secrets” of how The Riott Squad and Absolution formed is interesting, it’s all referencing events that took place a year ago, which is an eternity in wrestling terms.

BOTTOM LINE: I DON’T GET IT

There’s nothing wrong with the idea of comic-book wrestling adventures, but the ever-changing nature of the WWE means that Asuka has made it to the main roster, lost her undefeated streak, been defanged and essentially buried on the main roster before this book ever made it to stands.  WWE NXT Takeover: Into The Fire #1 may have something to offer to the hardcore fan who loves seeing the NXT Women’s roster in action, and that’s perfectly valid, but I just can’t fathom the need for it, which combines with the escalating wobbles in the art and story to make for a combined 2 out of 5 stars overall.  I will say that it has a pretty gorgeous cover, though.

Well-drawn art that doesn't really feel like it fits the WWE action, with some really clunky dialogue and an okay story whose appeal and assumed audience are a mystery to me...