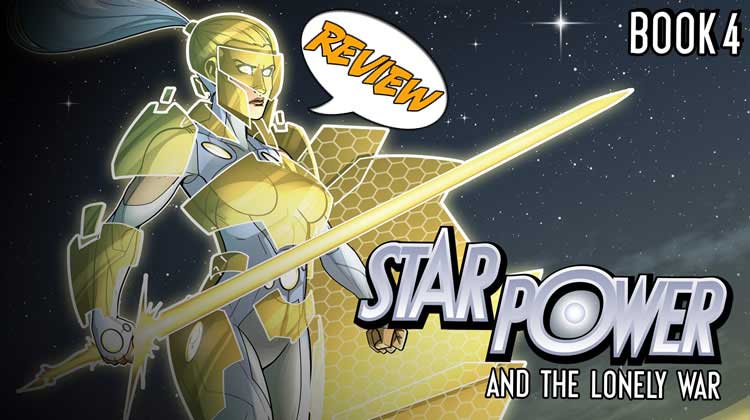 I love going to comic cons more than ever these days because I often discover really terrific comics series that I fall in love with. I love supporting high-quality storytelling!

So, what’s in my mailbox waiting for me when I come home from Cincinnati Comics Expo? Star Power and the Lonely War Vol. 4, a  wonderful trade paperback. It’s fun, it’s action, it’s drama—it’s a comic I think should be read by a LOT of sci-fi/adventure comics fans! And it’s professional, just as good (if not better) than anything from Marvel or DC!

SOLICITATION: Every journey has its risks. Accompanying the Millennium Federation’s flagship exploration vessel to a new star system is a once-in-a-lifetime opportunity. The thrill of discovery and adventure is one Danica Maris cannot pass up, but the journey is long and she may not be prepared to face the reality of life beyond the known stars.

Rumors abound that the galaxy outside the Millennium Federation is barbaric and cruel. Danica has seen many battles as Star Power, but she has never known war. Her resolve and confidence will be tested, and there are grim circumstances if she cannot uphold the virtues of a Star Powered Sentinel.

EXPLORING BEYOND THE PALE

In the first three volumes of this series, we’ve been treated to the “known” galaxy, as it were. Mostly civilized, it’s a safe place, kind of like the Federation in Star Trek: The Next Generation. But eventually you have to go play in someone else’s yard, and that’s what this fourth volume does and does well.

I met Mr. Graham at this year’s Awesome Con, and it was there that I bought the first three volumes from him. I was very glad I did because once I dove into the premiere book, I couldn’t put them down until I had devoured every one I had. I spoke with the two during a recent episode of my podcast, which you can listen to at this link.

Anyone who reads my writings know I’m a big believer in strong female characters. This series has one of the very best I’ve ever read, and her name is Danica Maris. In the first story, she receives the abilities of the Star Power, and she becomes a Sentinel—someone who works to make things right, or at least tries.

But she isn’t Superman, who is completely moral all the time. She struggles with situations, unsure at times just what is the thing that should be done. She’s human, in the best sense of the word. She has a career and interests, and she’s only Star Power when she really needs to be!

One of the main criticisms of science fiction is that the aliens, if there are any, are completely unrelatable to readers. They’re weird, they’re quirky, they’re … well, alien. Star Power has humans and aliens galore, but they’re very real in the sense that they function in ways we get to know and understand. I care about these odd-looking folks around the lead character. And they’re fun to keep up with.

My favorite one is the boss of the space station, who has what appears to be a moustache (actually, it’s an alien appendage, but who am I to quibble?). He’s a by-the-book kind of leader, and he truly works hard to complete his tasks while making sure everyone is kept safe. I wish I had had more bosses like him!

And then there’s the story of war. Danica is completely unfamiliar with it, and she hopes people will be on their best behavior. Not so! When she discovers inhumanity in some of the worse situations, she retreats to a quiet place away from it all even though the Star Power isn’t about running from a place it’s needed.

The pacing is quick when needed, but none of the energy is lost when things slow down to help us understand just what’s happening and for wonderful character moments. It’s science fiction at it’s best!

One of the things that drew me to this book was the way Danica was portrayed. Very feminine while being very strong, possessing a power that can make things work out in the way we’d like to see them take place. She looks like a girl who hasn’t yet experienced much in life, with an expressive face and movements that are very realistic.

This volume in particular has a lot of action in it. And Graham does an excellent job of drawing us in to it. But, as I have already mentioned, there’s drama more gripping than we’ve met before. That’s a strength of this series, to get even better with each story. Well done!

BOTTOM LINE: What Is War Good For?

This volume of Star Power explores Danica’s role in the universe. Even though she’s capable of battle, how often should that take place? And should she be using her power without putting some thought into it? Great drama, high-power action—it’s everything I’ve come to expect in this terrific series. Please notice that each volume has a different “subtitle” to it, like this one is called “The Lonely War.”

I also like that the book has its own “star power” to it, a great story told “superbly” well!

The bad news is that you can’t get these books through Diamond or your local comics shop. But if you run into the creators at a comic con, they often have the volumes available for purchase. Otherwise, I would be missing out on a story so worth reading! They sometimes run Kickstarter campaigns, which is how I received the fourth volume. Now I watch for them all the time!

If you can’t wait for a con, you can go to starpowercomic.com. The wonderful store on this site makes the trades available as well as great art and other related items. Highly recommended!

Star Power and the Lonely War

Great drama, high-power action—it’s everything I’ve come to expect in this terrific series.