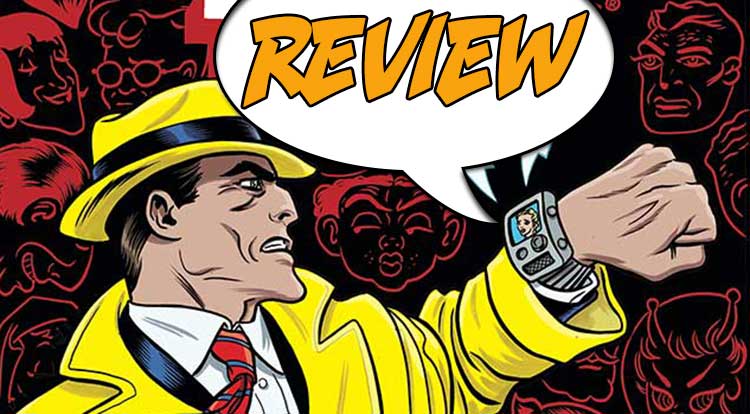 The two-fisted fury of iconic police detective Dick Tracy lands hard in Chicago as his unrelenting search for justice brings him face to face with the ruthless mob boss known only as Big Boy.  Tune in your two-way wrist TV to action in Dick Tracy:  Dead or Alive #1! Previously in Dick Tracy:  Dead or Alive: Iconic detective Dick Tracy’s unrelenting quest for justice has seen him butt heads with police commissioners across the country.  After arresting software mogul turned serial killer G. Jepson Peepers, Tracy is forced to hand in his badge for bucking the politics of the city.  Now, after landing in Chicago, Tracy seeks to clean out the corruption nestled at the very heart of that great city by the lake!

TUNE IN FOR ACTION

Unlike Dick Tracy, this review takes no prisoners.  Dick Tracy: Dead or Alive #1 is a brilliant piece of writing and art and a heart-pounding opening issue to boot.  It starts at a sprint, and never lets up through the page count, delivering fantastic characters and action and keeping faith with the strip’s 1930s antecedents, while slyly nodding to our present day technology and sensibilities.

In this all-new take on an iconic hero who dates back to 1931, writers Lee and Michael Allred have fashioned a breakneck-paced storyline that begins with a chase and ends on a delightfully macabre note.  After capturing the wonderfully named G. Jepson Peepers, a Silicon Valley software mogul turned serial killer; our square-jawed hero comes face to face with the political realities of Peepers’ connections with the rich elite in the city.  Handing in his badge rather than compromising is hard-edged ideals, Tracy is quickly hired by the new, female governor of Illinois, to help break the corrupt grip strangling Chicago.  Within moments of arriving, Tracy begins his audacious reign of terror against the criminal elements in the city, those men who straddle both sides of the law.

The distinct feel of Dock Tracy:  Dead or Alive #1 comes from its artwork, which doesn’t simply nod to the 1930s, but kowtows.  There is no attempt at the sort of verisimilitude we’ve come to expect from modern comic art.  Instead, there’s a deliberate effort to model the artwork on the more primitive style prevalent in that era of comics.  I’ll confess on first reading the issue, the art did nothing for me, but once you understand that in the exaggerated world of Dick Tracy, with the outlandish characters comes an outlandish art style, and Rich Tomasso embraces that style with supreme gusto.  Indeed, the issue comes with several pages of artwork at the end, showing the reader how Tomasso’s pencil work comes to life under Michael Allred’s inks and Laura Allred’s colors.  That, and an excerpt from the script help make this a must buy issue.

Back to the art – don’t let the word primitive fool you.  All the modern techniques of panel placement and coloring are on display here, helping to push the story along at a breathless speed.  Indeed, the uncomplicated style perfectly suits the larger than life character of crime boss Big Boy, his plots and schemes to maintain dominance of the city.  The artwork is a really entertaining throwback to a simpler era that complements the tone of the Allred brother’s writing.

And the writing is the real star here.  Tracy is depicted as a ruthless detective who will stop at nothing to bring lawbreakers to justice.  The curt phrasing of the dialogue, his incorruptibility cast against the naked corruptibility of those he fights to bring to justice, and his willingness to use violence to solve a problem all hark back to the noir storytelling of the era Dick Tracy first appeared in.  Don’t let the bright colors deployed by colorist Laura Allred fool you – there is a black streak of violence and nihilism running through this book that elevates it above mere spectacle.

Dick Tracy: Dead or Alive #1 is a book you should all check out.  There are incidents and action on every page.  The writing is top shelf – how anyone could resist Tracy advising a criminal against trying to shoot him with ‘I got a Tommy gun in my hand and it’s in a barking mood’ needs to check for a pulse.

In an age where the shelves of your local comic book shop are filled to overflowing with spandex-clad superheroes with mummy issues, Dick Tracy: Dead or Alive #1 is a cleanly written beast of a comic, with a throbbing heart waiting to be unleashed on all those who deserve to fall under the shadow of the man in the yellow trench coat.

Dick Tracy: Dead or Alive #1 is a cleanly written beast of a comic, with a throbbing heart waiting to be unleashed on all those who deserve to fall under the shadow of the man in the yellow trench coat.