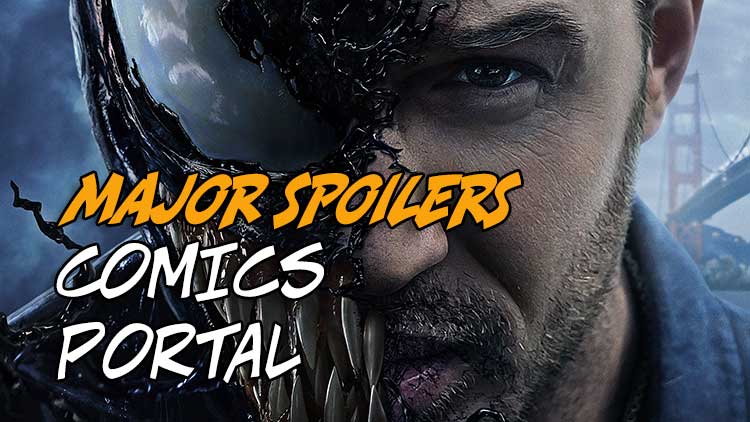 COMICS PORTAL: A Comic for Sale in a Movie Lobby!

For a long time, I’ve been saying that a theater showing a comics-related movie ought to at least have a local comics shop selling titles with that character or those characters in it! After all, people who came to see a film with that person or persons is, at the very least, somewhat interested in them! Why not try to get them more about that comics-related person or team?

Some shops did that for a while, but that practice faded away some years ago. Well, it’s coming back in a slightly different mode, at least for one movie!

EXCLUSIVE TIE-IN TO BE RELEASED The IGN website exclusively announced that Marvel has developed an exclusive tie-in comic to the upcoming Venom film, and fans can check it out now even though the film won’t be in AMC theaters until October 5.

To read a digital version of the book, you need to go to this link at Marvel.com. It’s been available since last Friday morning. Paper copies will be able to acquire one of these limited-edition comics if they purchase their tickets at local AMC theaters.

The comic is written by Sean Ryan and has art from Szymon Kudranski, colorist Ian Herring and letterer Joe Sabino. The cover was created by SKAN. It’s an official prequel teaser to the movie, setting up what will be in the feature film.

THIS SHOULD HAPPEN MORE OFTEN

I’m very happy that Marvel is going to give this a try. It’s interesting that it will apparently be sold by the theaters themselves instead of the local shops.

The question is, will this make the comic more or less collectible or interesting to fans of the character?

If I would venture a guess, I bet it won’t be something a lot of collectors will be after. Venom is like the Joker in that he has a small but devoted following. Some villains do have devotees, all right. Yes, those Venom fans will want to seek it out if they can’t make it to the movie theater that opening weekend.

A lot is going to depend on how that movie does in that initial frame. If it does well, more people will be after it. If not, well, it will be a setback to this whole practice of making comics available with related movies.

I base this somewhat on the current Walmart experiment that DC has undertaken. I don’t hear a lot of collectors seeking them out. In fact, I’m not all that certain DC fans are trekking to this popular chain to get them. I mean, I am after them as much as possible. But not many other comics fans I know are searching their local Walmarts in an effort to collect or even buy and read them. Believe me — I WANT this to be a success. I’m just not sure that making comics available in a location other than in a LCS or online is something fans are currently open to.

THIS HASN’T BEEN A COMMON PRACTICE I can remember back when Batman: The Dark Knight Returns sold out in local stores. I had to travel all over the state to get to bookstores that would carry them. Granted, those bookstores no longer exist, but I drove hours just to find a few copies of that now-classic series. I drove home with a sense of triumph! After all, I had valuable copies that I couldn’t find in my LCS!

That’s probably as far into collecting as I’ve ever gone. Just remember that I’m a BIG Batman fan, and that series completely revived the character’s comics life, making him someone people wanted more of!

Maybe what needs to happen is that the Venom comic gets his fans getting to local theaters in droves. I hope that’s what will happen, but I haven’t heard much noise since the digital copy became available late last week. It’s either a slow burn or I need better friends!

My hope is that, even if this comic doesn’t live up to Marvel’s expectations, they will continue to give this practice a try. And if the House of Ideas makes this happen, well, how long before DC and other comics companies decide they want to follow suit.

Again, I think it’s critical that the comics industry works really hard to create as many revenue strains as possible.  I  hope they’ll try more things like this, not fewer ones. At least give things like this a serious chance to catch on with fans! Don’t give up after one try!

What do you think? Is this a practice you would support? Are you planning to buy the tie-in Venom comic at AMC theaters? Or is this something that today’s fans just aren’t going to have much interest in? Whatever your opinion, be sure to share your opinion and thoughts in the space below!