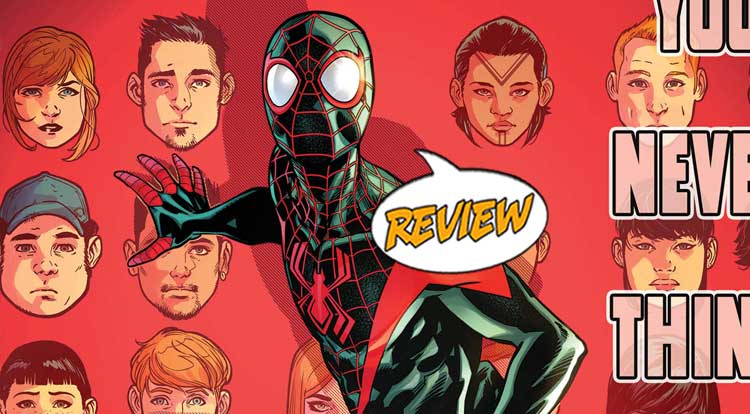 The Champions grapple with a foe that all the super-powers in the world cannot vanquish!  Your Major Spoilers review of Champions #24 awaits! Previously in Champions: The teenage heroes of the Marvel Universe have banded together to fight the fights that the adult heroes won’t or can’t.  But that doesn’t mean that they will always win their battles…

We open with five Champions (new kid Snowguard, Ironheart, Spider-Man, Viv Vision and Amadeus Cho, now using the nom de guerre of ‘Brawn’) helping to build a new community (which that they also helped to fund) when a sudden text message sends Miles “Spider-Man” Morales off in panic.  The others are confused until Viv explains that she is receiving emergency alerts about a mass shooting at Miles’ school, one which has left seven dead and many more (including his friend Fabio, aka the former X-Man called Goldballs) hospitalized and injured.  Miles is overwhelmed with helplessness, made even worse when the grief counselor tells him that there’s nothing he could have done.  After all, she reminds him, he’s NOT a superhero, making his distress that much worse.  After blowing off a couple of team meetings, Spider-Man is confronted by Ms. Marvel, who sneaks up on him to try and make him feel better.  Her wisdom includes one important bit of advice: “We can’t save everyone.”

Those who are worried or angry about “political” content in their comic books are probably going to be mad about Champions #24, but Zub’s script manages to make a number of salient points without entering into a political argument.  The use of the various team members’ points of view is well-done (Viv Vision is only interested in quoting statistics, while Riri Williams feels a cynical certainty that nothing can EVER be done, while Amadeus is plotting out ways to make larger social changes) and the quiet moment between Miles and Kamala on the rooftop is adorable, as well as meaningful.  Her insistence that they recognize their own limitations is important, as important as Peter Parker’s mantra about power and responsibility, and the issue ends with the team coming together hopefully for the opening of the community center.  Izaakse’s art is up to the task of the necessary facial expressiveness (especially Miles’ shock/fear/dismay at the counselor’s unintended insensitivity) and makes everyone look heroic but human at the same time.  I especially love the design of Ironheart’s new armor, though I’m a sucker for black-and-red uniforms.

I’ve heard a lot of blowback about this book being condescending to young people (albeit less under the current creative team) and I imagine that a comic book addressing the issue of mass shootings in any context with ANY creative team or angle will enrage some readers.  But Champions #24 manages to provide some meaningful context while providing important character development for our young heroes without preaching or trying to hammer home a political point, doing so with lovely art and earning 3.5 out of 5 stars overall.  In the history of comic books tackling hot button issues, there are a lot of huge missteps and outright disasters, so this issue’s story success and relative subtlety were satisfying to me as a reader.  Mileage, as always, may vary.

A delicate issue, handled with respect from a character perspective and a really nice art job.