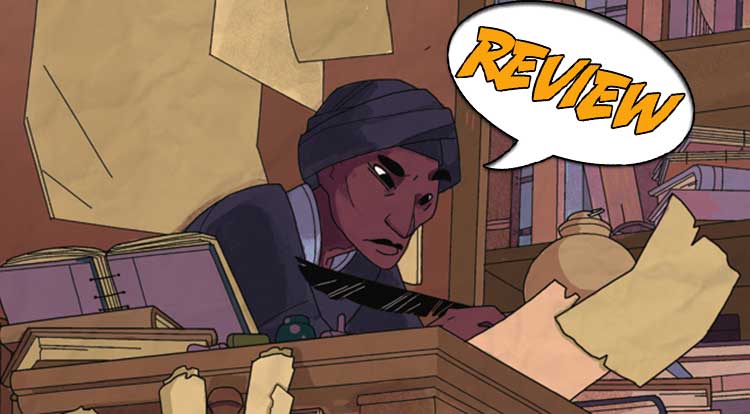 Nicolas and the gang have a plan to get into the Great Library of Constantinople, and it works! But then the unanticipated complications begin. Good thing they have…a donkey? Let’s find out in Real Science Adventures: The Nicodemus Job #3 from IDW Publishing. Previously in Real Science Adventures #3 (The Nicodemus Job): Nicolas Fardas and his team did a little more reconnaissance of the Library. Things did not look too favorable. They considered a variety of cons, only to find problems with all of them, not the least of which was that they needed to be able to bring a cart into the library. This is the 11th century, after all, and the texts they are looking for might be scrolls, books, or stone tablets. Then Nicolas got an idea…

INTO THE THICK OF THINGS

As we begin Real Science Adventures #3, a cart shows up at the Library doors and the guard on it demands entrance. They are bearing the Nicodemus, but it wasn’t expected this early. That is because this is actually Nicolas and Sofana, and this is part of The Plan. They intend to drive the cart right into the Library and do exactly that. A librarian confronts them, and again Nicolas implies that they carry the Nicodemus. (They also learn the official entourage has more guards than they had anticipated – but that is Emir’s problem.) The librarian calls for a scribe, and Palatina steps up. She purports to check their papers, and finds that the seal is genuine (surprise, surprise). There is some discussion about bringing the mule cart into the library, and Palatina is ordered to go along and mind the mule.

And then the first complication arises. The Library is divided into sections – one for the heretical texts, and the other for the non-heretical ones. The Nicodemus is non-heretical. The ones they need to find are heretical. Meanwhile, Emir is on the streets, anticipating the route the Nicodemus would take. He finds ten guards accompanying that cart, and dispatches many of them pretty handily.

At the correct spot in the Library for the Nicodemus, Sofana claims that the rite she needs to perform before the transfer will take an hour, and suggests that the librarian need not stay. Alas, he has sworn an oath, and will spend an hour of his time with them. Sofana begs him to help her with the altar, and between Nicolas, Palatina, and Iskander, they subdue both the librarian and the guard who came along.

Back on the streets, Emir is left with but one young guard and looks around for more. Finding none, he throws his sword away and informs the guard that he (the guard) should arrest him, and to be sure to look for evidence and interview the priest in the cart.

In the Library, Iskander figures out the abbreviations used in the ledger which is the Library catalog, and the team moves the cart over into the heretical section. They don’t have much time left, but Iskander comes up with an idea to buy them some more. He and Palatina put up a bunch of notices on the door:  “Construction area,” “Keep out,” “Do not open,” “Renovations,” and so forth. It may not be the best plan, but it is better than no plan at all.

As we have come to expect, there is an epilogue showing another meeting. It starts out with Sofana training Palatina in street thievery. They stop in a small shop where Sofana sells her haul of trinkets, loudly claiming that she just found them along her walk. Unbeknownst to the women, Nicolas was in the back room, listening and observing. He knows Sofana is a ringleader of thieves and follows her. Back at her residence, he finds that she is training youngsters to be thieves to save them from even worse lives on the street. It is an interesting development in the younger Nicolas’ character that he sees the justice in this, and urges her to train them well enough that the guards cannot catch them. It is yet another charming introduction that really makes the characters even more likable.

As we’ve come to expect, the art of Real Science Adventures #3 is stylized and delightful. The linework is simple and, in longer shots, more suggestive that detailed. But it is expressive throughout. The angles are varied, and the settings are fascinating. The scenes with the librarian, especially with Palatina pretending to be a scribe, are humorous. The art goes perfectly with the snappy dialogue.

Emir’s action scenes, as he clobbers guards right and left, are energetic and with great sound effects. His expressions as he gives himself into the last guard standing are superb. It’s like we’re in on the joke – we know he’s manipulating all of this as part of a bigger plan. But the last guard standing doesn’t know this. Trust me on this – absolutely delightful.

BOTTOM LINE: ARE YOU NOT READING THIS BOOK YET? IT IS SO FUN!

It seems to me that things are accelerating just a bit more here in Real Science Adventures #3. I love each issue more than the last one. The characters are clever and they have to think on their feet, which gives the book a strong sense of excitement. It is easy to keep liking them more and more and to get behind them wholeheartedly.

The characters are clever and they have to think on their feet, which gives the book a strong sense of excitement. It is easy to keep liking them more and more and to get behind them wholeheartedly.