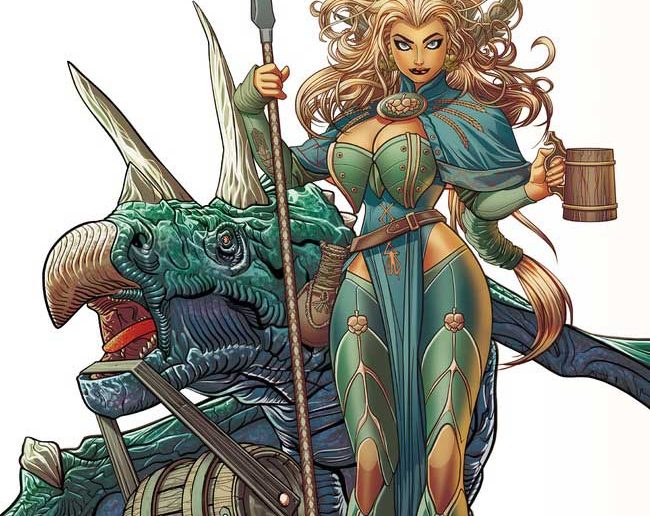 Beer and comics fans rejoice! Dark Horse Comics and Ninkasi Brewing Company are “hoppy” to announce a new partnership. These two innovative and creative Pacific Northwest companies are proud to combine their passions to create a story that speaks to the origins of Ninkasi in Legends of Ninkasi: Rise of Craft.
“One of the best things about comics is the ability to bring together unique visions to create something great, and that’s exactly what this project has been since day one,” said Megan Walker, Dark Horse Associate Editor. “Partnering with the folks at Ninkasi Brewing has been a natural fit, and the story we are creating is a lot of fun—I couldn’t be more excited to be working on this project with them!”
Written by Jim Gibbons (CORPUS: A Comic Anthology of Bodily Ailments) with art by Eduardo Francisco (Aliens: Defiance), Legend of Ninkasi: Rise of Craft will be available for purchase at NinkasiCon next spring along with a beer featured in the comic. In Legend of Ninkasi: Rise of Craft, the citizens of the medieval kingdom of Eugenia subsist in a listless stupor because the evil King Blüdweisen is holding them hostage. He’s outlawed craft beer and serves only his terrible-tasting, mass-produced brew. Sensing some corruption of the spirit of beer, Ninkasi, the Sumerian goddess of fermentation, and her faithful companion Tricerahops travel through time and space to investigate these dark portents. There they meet two brewers who they inspire to rebellion—a rebellion against horrible beer . . . and zombie vikings!
“This has probably one of the most fun experiences I’ve had since starting Ninkasi! Working with Dark Horse and seeing first hand the process and the talent to bring this project to life has been amazing,” said Nikos Ridge, Ninkasi Co-Founder and CEO. “We’re excited to share the final result with everyone, including a specially created beer to pair with it, which may be a comic first!”
“As a lifetime comic book nerd, the idea of a Ninkasi comic book has been a dream that even inspired a tattoo on my back. Working with Dark Horse to bring the Legend of Ninkasi to life has been a fantastic ride,” said Jamie Floyd, Ninkasi Founding Brewer. “Dark Horse is like a fine tuned Superhero superhero team, and watching Jim and Eduardo nail the story was fun and inspiring to see how imagination becomes reality!”