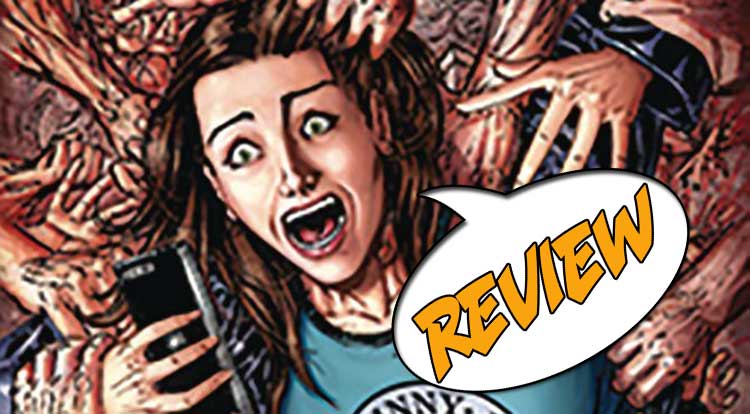 Harry Prest is about to learn that his actions have consequences, and that a woman scorned is often the most dangerous sort of all. No amount of prestige and money can help when death has your number as Harry finds out in “Phone Call From Beyond The Grave”, the subject of this issue of Grimm Tales of Terror #6 from Zenescope Entertainment. Previously in Grimm Tales of Terror:  She appears as an attractive woman of sensuous build and flaming red hair. She is Keres, the goddess of death, and when she decides someone needs punishment for their actions against others, she gives that punishment in unique and horrific ways. As the goddess of death for the Zenescope Universe, those punishments can be truly disturbing.

DO UNTO OTHERS, ONLY DO IT FIRST

Harry Prest is living the American Dream. He has a successful career, a beautiful wife pregnant with their first child, a best friend who is a loyal as the day is long, and a tendency to have illicit affairs with beautiful women. Yes, Harry is living the dream, but it’s a dream only the worst kind of person would take pleasure in. He has no problem telling his wife that he is working late at the office and won’t be home, he even blames his best friend as the reason for his absence. He seems to live two lives, in one he is the devoted family man with a high-paying career, and in the other, he’s a man about town who uses women as tools to satisfy his own base desires.

It’s the latter life which he attends to when he convinces a nineteen-year-old waitress to come to a hotel room with him for a night of sex. After he ditches her in the hotel the next morning with less than an afterthought, he returns to his latter, more respectable life. He even lets his best friend Brandon know that he told his loving wife it was his fault that he had to spend the night at the office. Brandon only is concerned how this makes him look, not for the feelings of his best friend’s wife. But that’s not the first time it’s happened.

In college, Harry was of a similar habit, using women for pleasure and then dropping them after he got his needs attended to. In fact, this one time, a girl practically was stalking him, begging him to call and talk about their relationship. She thought she loved Harry, but she didn’t know the real him. In fact, he was so devoted to himself, he might have even been the reason she killed herself. But, I mean, he only told her to do it, not like he held the knife or anything.

It’s not like the past means anything here in the present, or that those increasingly disturbing text messages will lead to anything sinister? Right?

THE PAST IS NEVER IN THE PAST

The format of the horror host began long ago and can be traced back to as early as the Greek plays of ancient times. It gained popularity in the days before television on multiple radio shows and migrated to television in the form of Vampira, Zacherley, Svengoolie and hundreds of others. In comics, we were treated to the antics of the Cryptkeeper, Cain and Able, and even Elvira, who has had a career in multiple formats. It is from that mold that Keres takes her cue: she introduces the tale and gives a chilling denouement to the story, continuing a tradition as old as the arts.

Ben Mears (Hellraiser: Beastiary, Hellraiser: Anthology) writes tale of horror that could have been taken directly from the headlines of today’s news. Harry Prest shows one of the worst aspects of mankind: he cares only for himself and only feels bad when he is caught and his comfort is threatened. His friend Brandon is a little better. His role as an enabler contributes as much to the horrific ending as Harry’s own actions. Mears takes what starts off as a standard tale of deceit and sex and takes a swerving turn down the off-ramp of the supernatural, thus allowing the true beauty of the tale to unfold. My only complaint is that the ending, although horrific, was a little to clean cut. The lead up to it was much more disturbing, and to have acknowledged the supernatural path which it took to that point may have given it that extra little oomph!

The artwork to the tale is split between two teams. The first five pages are by Ren Ferrer (Jungle Fantasy: Ivory). It’s good art which serves well for the opening sequences. Once we arrive at the sixth page, we have an art switch to Renzo Rodriguez (Breathless, Spirit Hunters) who serves the remainder of the tale excellently. Rodriguez characters present with a fluidity that accents his panel designs wonderfully. He has an excellent command of anatomy, and a variety of facial expressions bring the characters to life. The story is served by two colorists as well, Marcelo Costa (Zombie Tramp, Vampblade) and Marco Lesko (Robotech, Peepland). Both colorists deliver fine work, especially when they handle the sepia tones flashback scenes. Grayscale and the like can be difficult, but they serve it up and it looks wonderful. There is only the slightest change in the styles of coloring, and there is no jarring switch when one follows the other.

BOTTOM LINE: A DISTURBING, BUT SATISFYING, TALE OF RETRIBUTION

I love horror comics, especially ones which feature any sort of horror host. I attribute this to my early days of reading House of Mystery and reading my Uncle Randy’s Creepy magazines. While Keres only makes a minimal appearance in this tale, she does make her presence known. The overall story works well. It takes what could have been a mundane tale of cheating and divorce and punches in the horror to make it more a cautionary tale. It brings classic tales from Tales of the Crypt and Vault of Horror to mind, and works in that vein well. I only wish the climatic unveil was a little more horrifically mysterious, but it still works to bring the reader to a grimacing finale. But a warning, it is not for children. Themes of sex, violence, betrayal, and death fill the tale. If your good with that, you’ll enjoy the ride.

GRIM TALES OF TERROR #6 will warm the blood of many a horror fan, and continues a tradition which I hope is never forgotten. I suggest you open that creaking door to your local comic shop and have them put you a copy in your vault.