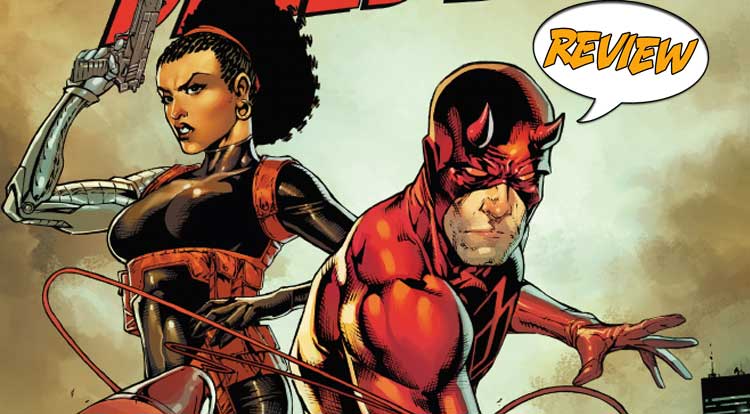 By Matthew Peterson on September 3, 2018 0 Comments Previously in Daredevil: You know Daredevil as the Man Without Fear, the protector of Hell’s Kitchen.  But once upon a time, Daredevil was just the newest super-suit on the block – and NYPD Detective Mercedes “Misty” Knight was just a cop on the job.  So when she places Daredevil at the scene of a crime, sparks will fly – and not the good kind.

This issue takes place in the fabled “Years Ago”, a time that is a composite of 70s cop movies (befitting Misty Knight’s origins), the fashion’s of the 2000s and a general lack of solid time touchstones.  The story opens with Misty’s partner, Detective Carmen Torres, telling her daughter a cute story about the heroes of New York, including a Punsher wearing flowers in place of a skull with a gun that fires cupcakes.  Misty is much more skeptical, mistrusting the costumed folks who get in the way of her doing her job.  Cue Daredevil, who gets involved in their latest case, and nearly gets a bullet from Misty for his troubles.  After some pretty solid police work, Misty figures out that the crimes are all related to a mobster named Frankie Fear, who suffers from a debilitating affliction.  In order to cure his illness, Frankie has been buying mutant growth hormone and kidnapping promising young chemists, forcing them to work on his “cure”.  When things go all monstery, Daredevil and Misty are forced to work together…

A LITTLE TOO ‘ON THE NOSE’ FOR MY TASTES

I generally like these “before they were friends” stories, but this issue pushes a couple of buttons a little too hard for my tastes.  Early in the issue, Misty (who will famously get a bionic arm after an accident after the events of this tale) remarks that she and other cops get by without “bionic whatchamacallits”, while the villain of the piece is called Frankie Fear.  The story is perfectly fine, but there’s not really anything special to make it stand out from any other Daredevil or Misty story for me, and you can count down the story beats from memory.  Having a predictable or overly familiar story isn’t an unforgivable sin, though.  There are a lot of fun things happening in the art as well (a running gag about Misty having to keep replacing her car is made funnier by the vehicles be recognizable models in real life) but there are storytelling issue that make things hard to follow for me, especially in the action sequence.  The design of monster Frankie Fear is likewise weirdly spindly and bloopy all at once, and while Takara excels at the quiet moments indoors and people out of costume (no mean feat, mind you), this Daredevil is weirdly musclebound and thick.

BOTTOM LINE: DOESN’T QUITE MAKE IT ALL WORK

In short, while there’s a lot to like about this issue, the stumbles in both art and story make it hard to justify the five-dollar price point for me.  Daredevil Annual #1 is a book that puts the focus on Misty Knight, which I appreciate, but gives us a story that tries a little bit TOO hard and art that doesn’t quite deliver, earning 2 out of 5 stars overall.  I really liked the interplay between Misty and Carmen a lot, though, and I’d be willing to check out more by this creative team in the future.

An interesting character study for Misty that tries a little TOO hard to show us her status as hard-bitten veteran cop, with some wobbly art.