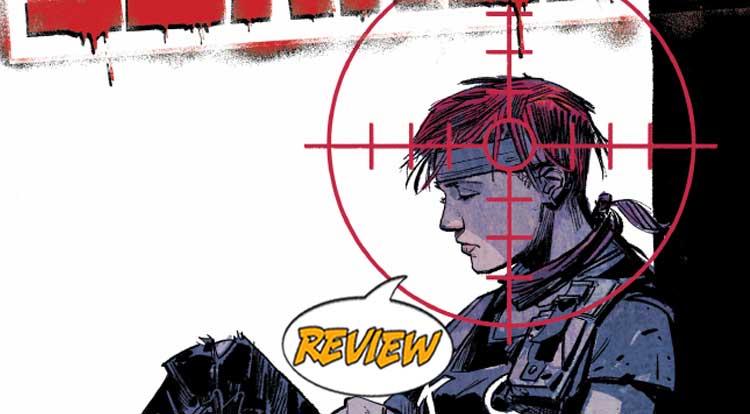 What happens when one young woman is pushed too far…  and what one country will do to stop her.  Your Major Spoilers review of Scarlet #1 awaits! Previously in Scarlet: Once upon a time, there was a young woman named Scarlet.  She was hanging out with her boyfriend Gabriel when a police officer destroyed their lives —  after trying to frame Gabriel, the corrupte detective gunned them down.  Gabriel died and Scarlet was left for dead.  When she woke up, Scarlet went on a campaign against the corrupt Portland Police Department.  She filmed everything she did and put it online for the entire world to see.  The growing support for her campaign brought a violent protest that eventually shut down the city.

This issue opens with a scene of sudden unexpected violence, as a group of makeshift soldiers seek out a hidden crate which seemingly promises resupply.  One of them leaps up excitedly only to take a bullet in the head, leading to a brief, but intense combat sequence.  From there we cut to first-person narration from Scarlet herself, explaining not only what has happened up to this point (ten issues of ‘Scarlet’ were previously released through Marvel’s Icon imprint between 2010 and 2016) but her personal feelings on suddenly being not only a celebrity but a rebel leader.  Scarlet also brings up some hard truths about race relations and the modern-day through a very Bendis monologue about the movie ‘Lincoln’.  Things quickly get violent again as a drone strike destroys an apartment building, with Scarlet and her small group of soldiers surviving by the proverbial teeth-skin, only to see a paratrooper dropping in with news: The White House wants to hear her terms.

The dialogue in this issue is interesting, as Scarlet is speaking directly to the readers and also with the characters, going back and forth.  When she’s discussing things with “us”, her word balloons are square, like captain boxes, switching to traditional circular/oval ones when she speaks out loud, making for a really interesting effect.  I’ve never seen the technique before, but it’s really effective, getting around the need for the now-antiquated thought bubbles.  Alex Maleev is a really talented artist, meaning that every page of this issue feels dirty and authentic and brutal and all of his characters have their own facial expressions and body language.  The final page spread of Scarlet and her lieutenants pointing their guns at the paratrooper from his POV (meaning that the guns are pointed at the reader) is really amazing, and I love the muted gray-blue color palette.  That gray-tone world makes the splashed of red in the blood and Scarlet’s hair stand out and really pop narratively, making every interesting from a color perspective as well as artistic.

The downside of a Brian Bendis dialogue issue comes in how it sometimes feels brief, and since this issue spends nearly a quarter of the issue with Scarlet talking to the reader, the issue’s end snuck up on me.  Add in the fact that there is CLEARLY a lot of information that readers are missing if they haven’t read the previous series, and Scarlet #1 makes for an engaging read that somehow feels incomplete, with an abrupt final page, but still earning 3 out of 5 stars overall.  I like the concepts, I like the challenging nature of the material and I really enjoy the art, making this book one that I would still recommend.  I’ve always said, I like Bendis better on his creator-owned material and this comic is no exception.