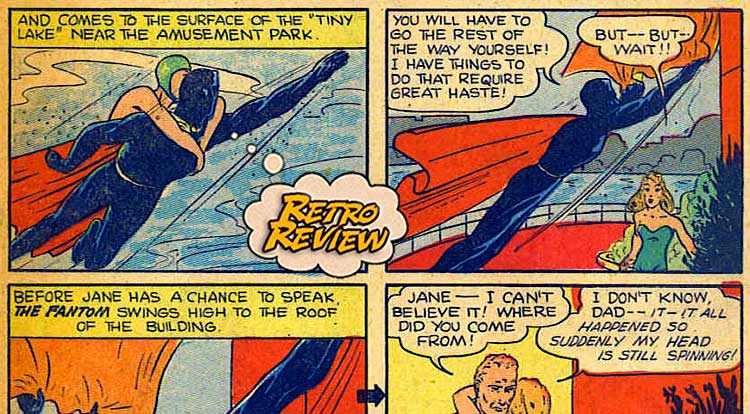 When is a first issue not a first issue? Thereupon hangs a tale… Your Major Spoilers (Retro) Review of Fantoman #2 awaits! Previously in Fantoman: One of the earliest publisher in the then-young field of comic books, Centaur Publications was short-lived, but immensely influential.  As The Comics Magazine Company, the concern that would become Centaur published the first masked hero in American comics with The Clock waaaay back in 1936.  Probably their highest-profile hero was Bill Everett’s Amazing-Man, whose origins would later be borrowed by Peter Cannon, Thunderbolt AND Iron Fist, although I have a soft spot for The Eye (who was a giant, flaming, mystical eye.)  This issue is the first issue of Centaur’s ‘Fantoman’ comic, and the cover indicates that they are picking up the numbering of ‘Amazing Adventure Funnies’, a previous Centaur title, to get around the U.S. Mail regulations.  (Publishers routinely renumbered books to get around mailing regulations, and in some cases to assuage vendors that the book was an established brand.  Yes, friends, at this point having a #1 issue was actually considered a liability!) Of course, in a twist of either fate or human error, Amazing Adventure Funnies published their own #2 issue soon after this one appeared on newsstands.  Either way, this is the first issue of this book and our first feature is the legendary Fantom of the Fair, AKA Fantoman, a hero whose origins centered on the 1939 World’s Fair. This Fantoman story is drawn and presumably written by Paul Gustavson, who created The Angel at Marvel Comics, The Human Bomb and Quality and did tons of work for nearly all the publishers of The Golden Age.  Fantoman has actually been revived more than once in the modern age, returning in the pages of ‘All-Star Squadron’ and also at Malibu Comics under the oh-so-nineties monicker of “Gravestone.”  For my money, you can’t beat the fact that Gustavson clearly rendered Fantoman’s hair before inking his mask, giving the indication that he has a VERY form-fitting mask.  Following two (pretty much by-the-numbers) stories featuring the cover hero, we are introduced to one of the earliest of the mustelid-named heroes, a category that includes Wolverine, The Badger and The Polecat. I really love the art in this story, one of only two Ermine stories ever made.  Centaur’s publishing plan, like so many contemporary comic outlets, was to serve as a packaging house for many artists, leaning heavily on their inventory, so a great many comic luminaries did work for them.  Witness the story of hard-bitten cop Ben Trumpson, known to friend and criminal alike as Little Dynamite! Little Dynamite’s dynamic layouts and unique linework is the product of Plastic Man creator Jack Cole, also a driving force at Quality Comics and Lev Gleason, where he revamped the original Golden Age Daredevil.  Another great who worked for Centaur in 1940 was Carl Burgos, creator of the android Human Torch. This Air-Sub DX chapter features some pretty gruesome (albeit incredibly well-drawn) violence near the end, something that I always associate with Burgos’ work.  Gustavson returns with another adventure of The Arrow, the original archery vigilante! The Arrow, too, got revived by Malibu Comics as part of their ‘Protectors’ line in the 1990s, as did a number of Centaur’s properties (all of whom died when their world blew up.)  Fantoman #2 is one of those books that is mostly interesting for historical purposes, featuring a lot of creators doing some interesting work without any real standout material or characters, earning a better-than-average 3.5 out of 5 stars overall.  If nothing else, the lineup of creators, the history of this publisher and the arcane procedures that make this #2 a #1 make for some fascinating comic discussion.

A lineup of Golden Age greats in the creative team, with some interesting behind-the-scenes events.