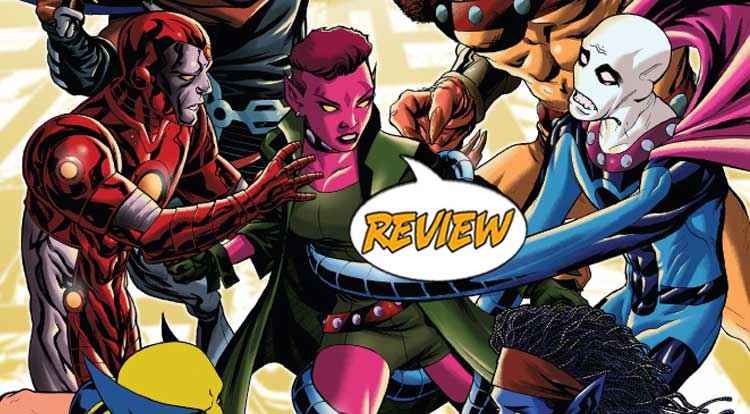 New Exiles?  Meet Old Exiles!  And Blink is caught in the middle.  Your Major Spoilers review of Exiles #7 awaits! Previously in Exiles: Having now formed a new team of Exiles, Blink was shocked to find that her old team was lost in the Multiverse.    When she resolved to rescue them all, the Exiles rallied around their leader, and the team ended up in the Old West (or a world that strongly resembles it.)  Sadly, they haven’t found their friends but have found the deadly Magnus Gang, led by the sharpshooting Magneto!  The Exiles now seek out the help of the man called “King”: AKA T’Challa, the Black Panther of the West!

THE STORY OLD EXILES FANS HAVE BEEN WAITING FOR

I had been wondering when we might address the questions of what happened to the previous Exiles team, and now they’re back…  and also the reason our team is in grave danger.  With Iron Lad in the clutches of cowboy Magneto, Blink and her team forges an alliance with The Black Panther, seeking revenge for Magneto’s murder of his father.  Their posse comes together quickly, but when they arrive at Magneto’s stronghold, they find his Brotherhood overwhelming.  Worse still, Morph and Nocturne are under the mental sway of The Pastor, his world’s maddened version of Charles Xavier.  Valkyrie manages to break loose, confronting Xavier’s psionic might head-on, while Black Panther and Magneto meet in a gunfight.

Sadly, there are casualties.

The casualties are at once the best and the worst part of the issue, as losing cast members is expected in an Exiles comic, and I’d be disappointed if things never changed.  The sad part, though, is that neither loss feels like it carries the weight that it should.  Hopefully next issue will follow up on the consequences.  As for the art, Reis and Ferguson do an amazing job this issue on all fronts.  Their Black Panther looks like Chadwick Boseman in a really well-designed, detailed cowboy Panther suit, while Professor Xavier’s psionic powers are drawn in a way that reminds me of Bill Sienkiewicz’s classic 80s Legion stories.  They also make tiny cartoon Wolvie look really cute and yet somehow more realistic than the regular art team, which makes for an interesting balance.  This issue’s story isn’t quite as wild and far-reaching as the first arc of the book, but the Old West mutants are a lot of fun, and a well-written quiet conversation between Blink and Nocturne ends up being this story’s emotional center.

BOTTOM LINE: A SOLID READ, BUT I WANTED MORE EMOTION

There’s a lot of really good stuff in this comic book, and I enjoyed it all, but I think I wanted there to be more consequences of this issue’s losses.  Even so, Exiles #7 is a good book with strong art and a nice balance of characters, cleverly remixing classic Marvel characters in a cowboy setting, earning 3.5 out of 5 stars overall.  I am looking forward to seeing how the book continues from here and whether new Exiles enter the fray, so it is a definite success on that level.

Brings back some of the original Exiles, but doesn't quite stick the landing emotionally. It's an issue that seems like it's going to have big consequences.