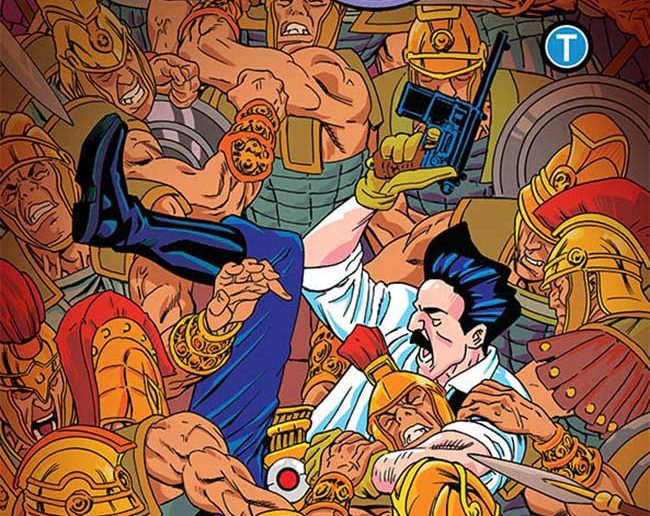 What’s a guy to do when someone steals his brain? If you’re brilliant scientist and daring adventurer, Albert Einstein, you chase them into the ancient past. But to catch the thief, Einstein must outsmart one of history’s greatest conquerors, Alexander The Great, and defeat mythological warriors unlike anything he’s faced before. It’s adventure time again! Athena travels to Portugal to retrieve a previously undiscovered Da Vinci Codex. Complications ensue, leaving the aviatrix and her companions racing around the globe to stop the Nazis’ mysterious Golden Dawn Society from uncovering the artist’s greatest secrets. Enjoy two more tales from the second season of Miraculous: Tales of Ladybug & Cat Noir! It’s Marinette’s birthday, and her grandmother pays her a surprise visit. But when she can’t relate to her grown niece after being away for so long, Hawk Moth finds his prey. He turns Marinette’s grandmother into Befana, a motorcycle riding villain with a candy-gun. Then, when Max’s pet robot (and best friend) is confiscated at school, Hawk Moth turns his little friend into Robostus, a powerful machine with the ability to make inanimate objects come to life! How will Ladybug and Cat Noir deal with Hawk Moth’s latest villains?! A bold new adventure awaits! Our heroes, LYNX and his sister, OCELOT, join the super team known as The HERO SQUADRON…and they are late for their first meeting. Maybe these delays are because of SUPER VILLAINS! Oh no! Looks like our heroes may have work to do before they even join the team. Will these cat-heroes fit in with the members of the HERO SQUADRON? Join us for this new SUPER HERO DIMENSION of the AW YEAH UNIVERSE told by famous cartoonist ART BALTAZAR!

This comic is 25 years in the making and will be awesome! On the edge of the kingdom of Ashland a great threat to the realm arises and it threatens to bring an end to the Ashe family for good. Now they have Devin and Tempest captive, but they have a friend who’s a wolf and sworn to make sure Devin stays in one piece.

Meanwhile, Adrienne was dragged off unconscious through the desert by a stranger in a robe. Where is she now and will it be the key to her quest? Two years ago, Raven Xingtao was locked in a tower and denied her birthright thanks to the scheming of her brothers. After she was freed, she set out to reclaim what was hers and get her revenge. It has been a long time coming, but after tonight the job will be halfway done.

On Golden Rock there is a beautiful fortress and at the heart of that fortress is Raven’s brother, Magpie. Unfortunately, between Raven and Magpie is every sword swinging, tough as nails pirate that sails under Magpie’s flag and Raven has a crew of about a dozen. The only way to get in the same room and face her brother is in disguise. Now, if things go south, there’s an army between Raven’s crew and their boat. And in plans like this, things always go south eventually.