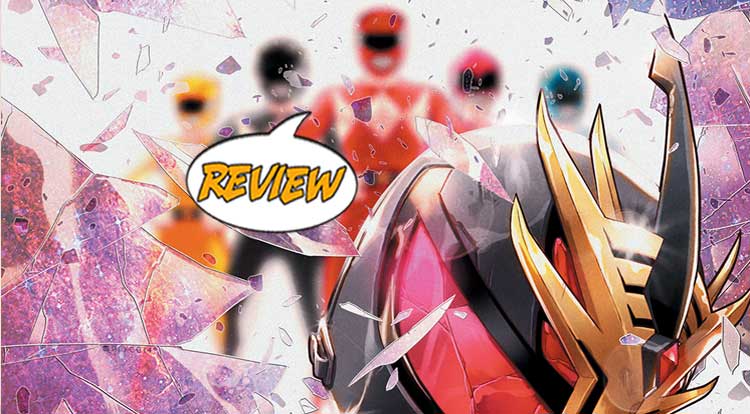 By Matthew Peterson on September 1, 2018 0 Comments

The battle with Lord Drakkon has reached its apex, but will even the reinforcements from other times and worlds be enough to turn the tide?  Your Major Spoilers review of Mighty Morphin’ Power Rangers: Shattered Grid #1 awaits! Previously in Mighty Morphin’ Power Rangers: The villainous Lord Drakkon arrived in the present from a terrible future, murdering the Green Ranger as his opening act.  Jen Scotts, the leader of Power Rangers Time Force, followed and rallied the Power Rangers to not only defend the world, but recruit other rangers from other times and places.  As things looked darkest, a final wave of reinforcement Rangers arrived to help defend all reality (realities?) from Drakkon’s onslaught, but it’s not certain that all of them are going to survive.

The hardest part of an issue like this is that, even double-sized, the issue can’t give us that “moment with everyone” that you want in a giant crossover episode, but the opening page featuring a possibly-dead Zeo Gold Ranger and Megaforce Yellow are almost as good, in s shocking way.  The battle rages outside Drakkon’s tower, but his possession of Serpentera, greatest of Zords, makes for an uphill battle.  In a desperate gamble, Time Force Pink collects several different Zords from different era to combine with the Megaforce Megazord to create a new giant Mega-Megazord, allowing Jason to make a suicide run on Drakkon’s shields.  Just as victory seems within their grasp, the very fabric of reality starts to crack around them, and the entire universe is reformed.  We join Tommy Oliver with his parents, Rita and Zordon, as he enjoys a healthy breakfast in a perfect world where he is practically Superman.  But why do strange energy beasts keep attacking?

NOT A DREAM, NOT A HOAX

Drakkon’s new world makes for one of the most amazing moments in a series full of them, as we discover that Drakkon is, at heart, Tommy.  And since he is Tommy, all he really wants is a home and a family, and no amount of power can give him what he needs.  Sharp-eyed readers of the Power Rangers books will remember a moment where the Ranger-Slayer (the dark future Kimberly) shot young Tommy with a special arrow a few issues ago in ‘Go Go Power Rangers’, and that moment of foreshadowing pays out here.  The art is lovely as well, featuring expressive faces and body language, making it easy to know who is who even out of uniform.  (And, as always, the Rangers helmets and uniforms look A+ amazing.)  The ending of this issue is kind of a shocker, even if you see parts of it coming, and the last couple of pages make for a perfect ending for a series of this magnitude.

This issue does have a particularly hefty price tag at $7.99, which is a bit steep for a single issue, but the per-page price is roughly the same as a regular BOOM! Power Rangers issue.  Mighty Morphin’ Power Rangers: Shattered Grid #1 gives us moments with all six of our primary Rangers, as well as a little bit of everyone else (and a great moment for Lauren Shiba) with really lovely art and a killer ending, overcoming most of my worries about price to earn 4 out of 5 stars overall.  Whether you were looking for a knock-down blowout battle or an emotional, personal battle for one man’s heart, Shattered Grid #1 delivers, and that’s pretty wonderful in and of itself.

The finale that this massive crossover deserved, featuring a little romance, a little world-shattering action, a new Megazord and an ending that I didn't see coming. Well-done.