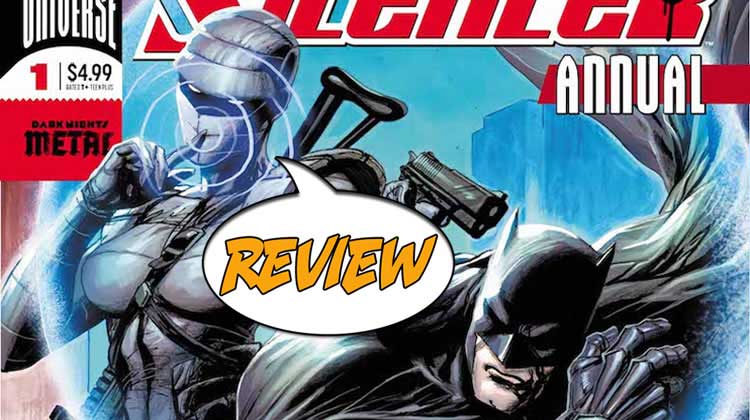 Of the several books in DC’s New Age of Heroes imprint, The Silencer has been my favorite. I’m drawn to the concept of a person who has been in the underworld who has tried to leave that life behind and live a “normal” life.

Add to that the fact that the lead character is female, and a person of color at that, and you have the makings of a comic of great interest to me! I also wasn’t surprised that DC was releasing an annual, and that it would include their most popular character ever – Batman! SOLICITATION: Silencer visits Gotham City, but she’s not there to see the sights—she’s there to shut down Talia al Ghul’s latest secret weapons plant. Obviously, this brings her into conflict with Batman—but there’s a secret history to Bruce Wayne and the Silencer that complicates everything! Will Batman slap the cuffs on this metahuman hit woman—or will one of Batman’s rogues get the drop on them both for the mysterious Leviathan organization?

THE SILENCER VERSUS THE BAT

The New Age of Heroes has been focusing on “lower tier” characters in the DC Universe. Honor Guest is a perfect example of this since her abilities make her very unlikely to become a member of the Justice League. (I do like her powers, by the way. Her zone of silence is pretty cool, I think.)

It does make sense to integrate these people into the DCU, and who better to take on than the Dark Knight in Gotham? Of course, when you battle Batman, you likely end up fighting one of his baddies, although this one isn’t a major member of his rogue’s gallery.

What makes this series stand out, and thus this annual is Honor’s family. Her husband and son are both average people. What’s really interesting is how her son looks at Batman as “not really a hero,” which works well with her Mom’s point of view. Nicely done!

This annual shows us how Honor first encountered her husband-to-be, and it was just an average, everyday meeting. He rented cars, and since she was in Gotham in need of transportation, they interacted. The rest, as they say, is history.

Another important part of the book is when Batman talks with Silencer, pointing out that, even though she considers Talia “family,” that’s not really the case. That seed of doubt blossoms into the aforementioned relationships, something I still think is really rare in the comics I’ve read.

And what would be a Batman appearance without a good battle? I really enjoyed the action, but since I’m a big fan of the Batmobile, I particularly loved how Silencer ran into that vehicle. Fun stuff!

Quick pacing makes this a great book that fills in some of the gaps in Honor’s past. I liked the characterizations as well as the action, so it’s a good one!

THE ART IS GREAT BAT-STORYTELLING

I’m sure every artist who works for DC would love to draw the Dark Knight. Mr. Herbert makes the best of this opportunity, portraying Batman in the style a fan like me can enjoy. There’s a page in which Silencer turns to see Batman heading towards her, and it’s classic! I loved that!

The action sequences are strong ones, and the facial expressions show the emotions the characters are feeling extremely well. A good example is when Honor talks with her son about Batman. I felt a lot of warmth regarding that scene, something rare in comics!

I have a feeling that The Silencer is one of the better-selling comics in the New Age of Heroes imprint. After all, you wouldn’t waste your best-loved hero on someone you don’t think deserves it!

If you aren’t reading The Silencer, I highly recommend it! It’s a series that has one foot in the main DCU and one in the “real” world, and its sympathetic view of Honor and her family is something I particularly enjoy. If you’re new to this title, this is a good place to jump on, so don’t miss it!

It’s a series that has one foot in the main DCU and one in the “real” world, and its sympathetic view of Honor and her family is something I particularly enjoy.