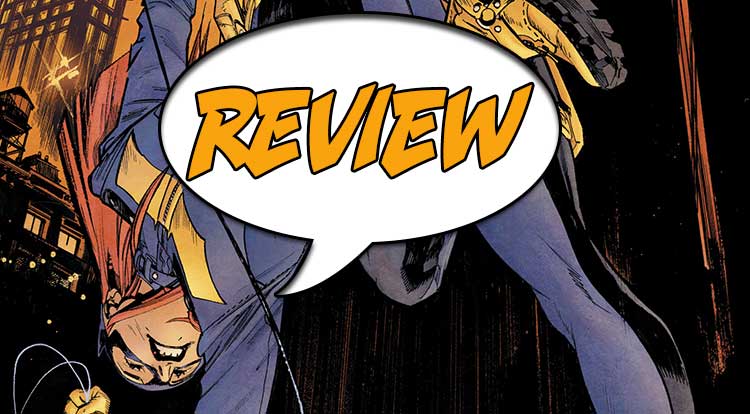 Batgirl is on the tail of Grotesque as he attempts to escape capture after committing his most recent art related theft/murders. But will the caped crimefighter make a fatal mistake in her efforts to apprehend the snobbish crook? We can find out in Batgirl #26 from DC Comics. Previously in Batgirl:  Answering a silent alarm, Batgirl is confronted by the villain Grotesque and his latest victims, the former owners of a rare Da Vinci sketch. After a short battle, she takes off after the fleeing villain, leading her on a motorcycle chase through Burnside.

A CHASE AGAINST CRIME

We pick up our story only moments after the events in Batgirl #25, as Batgirl is chasing the art thief/murderer Grotesque through the crowded streets of the Burnside district.  Using moves which belong in a Tom Cruise movie, Batgirl pursues the villain, wondering if the very city itself thrived on the acts of villainy. She recalls how her own father, Commissioner James Gordon, tried to show her the beauty in everything, even the dark city of Gotham, but her remembrance is interrupted as she arrives at the ultra-expensive apartment building which Grotesque has made his hide-out. A quick text to the police to call for backup, and she enters the villain’s lair. But Grotesque is waiting for her, and has a security guard hostage. He threatens to hit the guard with a few thousand volts of electricity from his charged weapon, but Batgirl presses the attack. Freeing his hostage, she engages in a battle with Grotesque which results in her taking a hit from the very weapon he had threatened the guard with moments ago. Unknowingly, Grotesque strikes at Barbara’s most vital point, the computer chip embedded in her spine which relays the signals to her brain, allowing her to walk. What happens next is painful to watch, but is nothing compared to the events that cap off the cliffhanger at the end!

A BLAST OF A BEGINNING!

Batgirl has had a variety of writers on the current run of her title, but this one starts off with a rush of energy which usually takes a few issues to achieve. Mairghread Scott (The Transformers: Till All Are One, Lantern City) made history by being the first female writer to officially write for the Transformers and she seems to have her sights set on surpassing that achievement by a throwing a mountain of action at you in this, her first full issue of Batgirl. Her internal voice for Barbara Gordon rings true to character, and the words read naturally. She spends a little time giving you some background on Barbara, her relationship with her father, and how she views the world and then jumps right back into the action with little to no hiccup in the flow. Not only does she activate an overlooked plot point, she uses it to springboard the character into an anger zone that feels like it could truly be dangerous. But the end of the issue, you are left not only concerned for Batgirl, but afraid for Barbara. This is just the first issue of the Art of Crime storyline, and I’m eagerly awaiting the next one already.

Now, let’s talk about the art. Paul Pelletier (Aquaman, Outsiders) has a great attention to detail. He adds just enough in the background to not distract from the action happening in the foreground. Little details like a fence line or debris on the road complete the picture for your eyes and allows your mind focus on where it should be, the action. There is a great sense of anatomy and proportion that some artist skip, and here it brings us to a fuller experience. Norm Rapmund (Booster Gold, Wolverine) grounds the work, adding shadow lines that allow you to know there is darkness, but not obscuring the art. He adds texture where needed, and leaves the panels uncluttered where it is not. He’s a veteran of the business, and work like this shows why.

BOTTOM LINE: AN ENTERTAINING START TO A NEW STORYLINE

I’ve enjoyed the “Burnside Batgirl” since she was first introduced, but felt there was a touch and go attitude with the character. Some wanted her to be the sexy Batgirl in the skin-tight outfit, a fully active member of the Batman Family, and others wanted her in the more practical and realistic young woman, like the well-worn yellow boots she favors. Here we get a return to the more realistic Batgirl, smart, attractive, and not afraid to use other people’s conceptions about how she should act as a tool against them. The book has a great balance, and this issue has pushed it back onto my buy list.