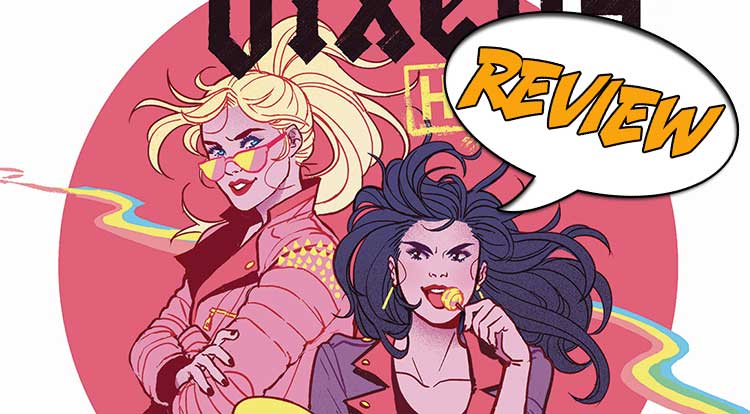 The Vixens continue to try and solve the kidnappings which have been happening in their little town of Riverdale. Now they finally have a suspect, but he has taken one of their own. And what about Veronica’s father? Now that he knows about the Vixens, how will this affect their family? Let’s find out in Betty & Veronica: Vixens #9 from Archie Comics. Previously in Betty & Veronica: Vixens: Betty and Veronica have taken on a seedy underside of Riverdale that few know about, and have taken steps to put a stop to it all. While investigating kidnappings involving young women, they stumbled on an illegal gun-running operation run by Mad Doc Doom, and Betty and the gang shut it down. But now, Cherry Blossom has been taken, and it’s up to Betty, Veronica and the Vixens to rescue her. But what about Mr. Lodge, can he handle the truth about the Vixens?

The Vixens have discovered that Mad Doc Doom is behind not only the gun running in Riverdale, but the disappearance of the girls as well. While Veronica goes home to try and get her father to help them., Betty and the rest of the gang set out to find the location where the girls are being kept. Veronica, meanwhile, was discovered rolling her bike into the garage by her father, and he is in no mood to help her. Mr. Hiram Lodge has planted his flag firmly in the court that claims his little girl shouldn’t be involved, and had sent Veronica to her room. He also cancelled her phone service, thereby cutting off Veronica from the developments with the other Vixen’s search.

It doesn’t take long for Betty to find out where Mad Doc Doom’s base of operations is, her and her biker babes head out, intent on saving the girls and ending the madman’s reign. Veronica has her own battle to fight as she stands up to her Daddy and demands he either help her or get out of her way. Things look bleak in the Lodge home, and nothing may ever be the same again.

WILD HEARTS CAN BE BROKEN

Let’s get this out of the way, I have not read but two issues of B&V: Vixens this one and the previous one. The simple reason is, the idea seemed a little far-fetched. I mean really, Betty and Veronica forming, much less joining, a motorcycle gang? That makes about as much sense as zombies at Pop’s or Jughead being a werewolf or…

Yeah, that was sarcasm by the way. I realized I was being a little dense about it.

The modern-day Archie gang is not the gang I grew up with. While “back in the day” you would get the occasional little dream story where they went to space or got chased by rejects from the backlot monster movies, you always were given a little ending that grounded them back in the “real” world of Riverdale. The characters are iconic to the point of being arch types, girl-next-door Betty, spoiled-rich-girl Veronica, but-she-has-a-great-personality-Ethel, cute-but-dumb-as-a-rock-Midge, you get the point. It was rather hard to imagine these characters outside of those roles. Luckily, I didn’t have to imagine it, Jamie Lee Rotante (editor, Archie Comics) did, and I’m glad. Much like the re-imaginings Afterlife with Archie and Chilling Adventures with Sabrina, she took a quirky idea, Betty and Veronica in a motorcycle gang, and ran with it full tilt. The magic here is, while you are reading it, you can totally see it as plausible. Betty still has that mother hen attitude, and Veronica’s normally super confident self are turned up, but the characters’ other attributes are enhanced as well. With that super confidence comes a sense of purpose, that mother hen attitude is expressed as caring about others. It would have been so easy to turn the whole thing into complete parody, but the story contained in these issues run beyond teen rebellion in leather, it touches on the gun problem, human trafficking, and more. Jamie gives up a good story that is wrapped up in a pretty package, but a good story never the less.  That all said, unlike the graphic nature of the Archie “horror” re-imagings, I would have very little trouble handing this over to my ten-year-old daughter to read. The story is something tweens and teens would get, and the art is very friendly.

Eva Cabrera (Romeo & Juliet, KIM & KIM) is a fine artist. She has a very shojo manga style and brings all of those sensibilities to bear with this work. The shojo style is especially evident in a series of flashback pages, and they contrast nicely with slightly grittier art of the rest of the book. It puts a point on the idea that these are not the girls you grew up with, they have changed and their lives aren’t going the way they wanted them to. It would have been easy for Archie Comics to assign a more realistic artist to this title and play up the cheesecake appeal of the characters, but I applaud the fact they didn’t. The story and art deserve to stand on their own, and they do very nicely.

Betty and Veronica: Vixens takes us to some different places than you would expect to see the ladies of Riverdale go. While it flirts visually with the girl-biker films of the sixties, it never goes into a sexploitation mode like many of the low-budget films of that genre did. No guys in leather ride in to save the day, the Vixens are responsible, strong women who can handle themselves no matter the situation. They make the hard choices, and live with the consequences.

Betty and Veronica: Vixens #9 is a solid entry into the lexicon of Archie Comics. Strong female characters and solid writing save what could have been a disaster, and elevate it to a tale worth reading. Pick this issue up, you’ll dig it for sure.

A great tale you want to check out, the Vixens ride pillion for no one.