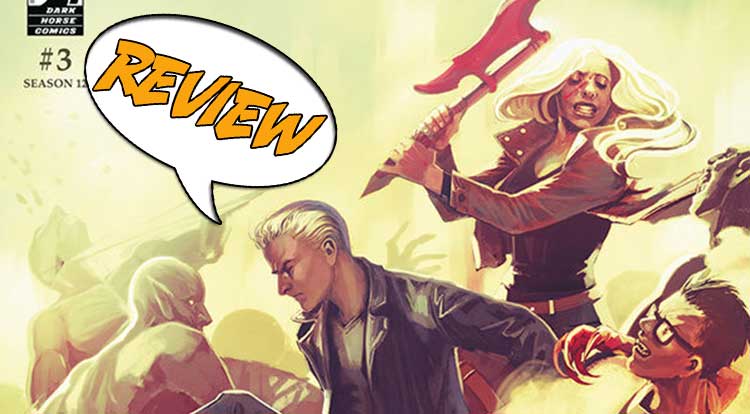 How can you defeat an enemy who hails from the future and knows your every move?  Surround yourself with all your friends and loved ones, which is exactly what Buffy does as she faces the vampire Harth.  See how the biggest battle of Buggy’s career pans out in this rock ‘em, sock ‘em battle to the death in Buffy the Vampire Slayer: The Reckoning #3 from Dark Horse Comics. BUFFY THE VAMPIRE SLAYER: THE RECKONING #3

Previously in Buffy the Vampire Slayer:  The Reckoning: Season 12 continues with a bang as the gang come together in touching scenes as they prepare to fight the foe from the future, the vampire Harth.  Older, wiser and still slayin’ it, Buffy brings together all the Slayer’s on Earth to defeat Harth and his demonic foes.  But Buffy faces an intolerable choice – to win, she must lose…

WELCOME TO THE HELLMOUTH – PART DEUX

For an issue that is one extended battle scene, Buffy the Vampire Slayer:  The Reckoning #3 manages to be touchingly effective at key moments, while bringing a truckload of the fighting fury that fans of the show have long appreciated.

Faced with the prospect of a foe from the future who knows their every move, and with the only solution to defeating the demonic horde condemning Buffy to an eternity in Hell, the team and their army of slayers plot and plan a way to avoid that terrible fate.  Writer Christos Gage, working on a storyline he co-wrote with series’ creator Joss Whedon, has managed a difficult balancing act tolerably well.

With the planning completed, there’s nothing else to do but fight.  Giles co-ordinates the teams, and early on it seems the battle is running the way of our heroes.  Gage mixes the combat with moments of cutting quips and almost casual heroism as the main characters strive mightily to confound a foe who knows their every move.  How do you defeat a creature from the future?  While

Buffy the Vampire Slayer:  The Reckoning #3 only hints at how that might be achieved, Gage does leave us on a mighty cliffhanger that promises much from the next issue.

With such a large cast of familiar faces, Gage has managed to pace the emotional beats through the entire issue in such a way that the pauses in action feel as if they were ripped right from the television screen.  While the pairings of these older members of the Scooby Gang are a touch surprising, Gage makes them feel as if the relationships naturally evolved, instead of being forced on the characters and readers.  So while Xander Harris hooking up with Dawn might feel icky for those of us with memories long enough to remember the original series, given the passage of time, it makes sense.  Their affection and love for each other is encapsulated in a heartwarming moment when Xander’s declaration proves that he wasn’t really a Zeppo after all.  Another highlight is Giles’ tender declaration to Buffy that he doesn’t regret not having children, as they could never have replaced her in his heart.  It’s Buffy to a tee.

I ROBOT, YOU COMIC ART

Aside from the adroit storytelling, we have some excellent art.  Penciller Georges Jeanty and a veritable army of inkers have brought familiar characters to life.  Faith, perhaps, is rendered less familiar as I remember her, but the rest of the regular cast easily match what I always imagined their older selves would look like.

Similarly, Jeanty marshals dozens of characters and monsters with remarkable ease.  Perhaps more related to the inking, the characters and their surroundings have a very organic feel, with almost no straight lines or angles, hinting at the nature of the unnatural enemies Buffy and her friends face.  While the figuring looks a touch cartoonish, there is dynamism in the movement and coiled energy in moments of repose.  The splash page when both sides in this battle collide is a riot of bodies flinging themselves through the air, cutting and whirling and kicking and fighting in a breathtaking scene of unbridled energy.  The lush colors do well to convey the emotions on display and underscore the organic artwork with a matching vibrancy

There’s so much going on in Buffy the Vampire Slayer:  The Reckoning #3 that it positively leaves you breathless.  The true proof of a story like this, which relies so heavily on continuity and familiar face, is the desire it left in your reviewer to start digging through some boxes in search of the DVDs of the show.  This issue fulfills the buildup of the earlier parts of the arc, and leaves the reader looking forward to the final resolution.  Bravo Buffy!

Get your Battle Royale on, yo, as this monster mash of an issue featuring every major Buffy player takes on the latest Big Bad in this all-fighting, all-punching, all slaying issue!