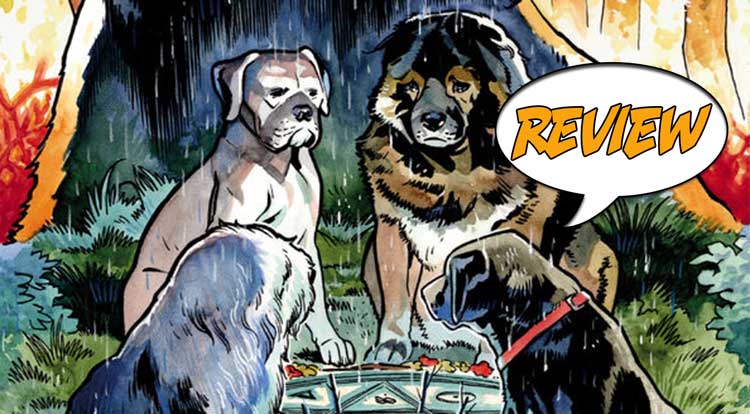 Magic isn’t only the purview of humanity.  As the wise dogs of Burden Hill know only too well, they are sometimes the only defense against the supernatural. Now it looks like the Hill is poised to be in conflict as a mysterious wildfire sets off a chain of events that will lead the pack on a new adventure. Let’s review the first issue of Best of Burden: Wise Dogs and Eldritch Men from Dark Horse Comics. Previously in Beast of Burden: The animals of Beast of Burden have dealt with haunted dog houses,  the followers of Sekhmet, a canine zombie attack, carnivorous giant toads from hell, and so much more. Now, they face another challenge, this time from an unknown corner.

THE GOOD BOYS (AND GIRLS) ARE BACK!

The Pocono Mountains are ablaze, and the animal residents are running for their lives from the flames. “Run or Die!” is the rallying cry, and all the animals are heeding it, except for one. A small black Scottish Terrier dashes headlong toward the heart of the fire, an off shimmer surrounding his furry body. Moments later he is at the source of the flames: a salamander, one of the fire variety. The young animal has been trapped by a cruel steel-jawed hunters trap, and it takes the Scottie only a few moments to free him and admonish him for having started the fire in his panic.  With a perceived burst of speed, he exits the forest just as clouds converge and a rain begins to help snuff out the rest of the fire. Returning to a staging area outside of the fire zone, the Scottie known as Lundy arrives to find his companions focusing on a magic circle, channeling power to him to assist his search for the cause of the fire. After a brief discussion with the local dogs who called on him to confront the problem, he joins his fellows in finding a place out of the rain. His confrontation with the fire salamander uncovered a unique mystery, and he needs to discuss it with the pack. What follows is will lead the dogs of Burden Hill to a magical trap, and into conflict with enemies that only resemble those they’ve seen before. But why were there traps in the forest, and can the pack survive to find out? And what of the newest member, does she just suffer from bad dreams, or are they omens of things to come?

MORE THAN A WALK IN THE DOG PARK

Evan Dorkin (Milk and Cheese, Welcome to Eltingville) returns to the animals of Burden Hill and wastes no time in throwing them directly into a new and mysterious conflict. Readers who are new to the title should not be put off, you are given amble information to get the gist of it. A pack of dogs with magic powers helps other animals combat mystic forces that would do them harm. It’s pretty straight forward, but writing makes it so much more than that.

Each dog, from the perceived leader Lundy to the new initiate Miranda, have their own voices and distinct personalities. They range from the boisterous and dismissively arrogant Dempsey (a boxer) to the more nurturing and patient Emrys (a sheepdog). Each animal has a personality which fits, for the most part, what you would expect from their breed. It adds a level of the familiar to the odd image of realistic animals conversing and performing magic. Additionally, the plot itself unfolds nicely, and you get hints of subplots and possible future events very organically. It’s a great job of writing and reads well.

While the other Beasts of Burden titles have artwork by Jill Thompson (Scary Godmother, The Sandman), this installment features art by Benjamin Dewey (I Was The Cat, Autumnlands), and I have to say, I love it. First, he draws animals wonderfully; you will believe a deer can talk! The animals maintain a realistic look, but he puts emotion on their face that facilities the believability of Dorkin’s words coming out of them. Secondly, he seems to work in watercolors. As a watercolor artist myself, I understand the difficulty this medium can pose, especially when you are trying to ensure continuity from page to page, panel to panel. A peek at his Tumblr page tells me that this is not all digital, but he actually works physically. In this day and age of instant brushes and no permanent mistakes, this is refreshing. It is beautiful, work, and it gives Nate Piekos’, of Blambot, expert lettering a wonderful base to start from. Mr. Dewey, if you are reading this, I totally get the Viewmaster influence.

BOTTOM LINE: BETTER THAN A SCRATCH BEHIND THE EARS

Although this title has been around in various mini-series and short stories for years, it is always a pleasure to discover something that has remained so fresh and inventive over its time. It is equally pleasurable to find a change in artist that manages to keep the feel of wonder which the established artist has long established. I have already made plans to order the collection from Dark Horse, and look catching up on the tales of these good boys and girls and their magical adventures.

Beast of Burden: Wise Dogs and Eldritch Men #1 manages to do what other series sometimes fail, to keep the story fresh and entertaining while losing none of the magic. I recommend it to anyone who loves a good adventure and quality product.  Make sure you pick it up at your local comic ship next time you’re out for walksies.

Fun without being silly, it deserves every bit of the hype.