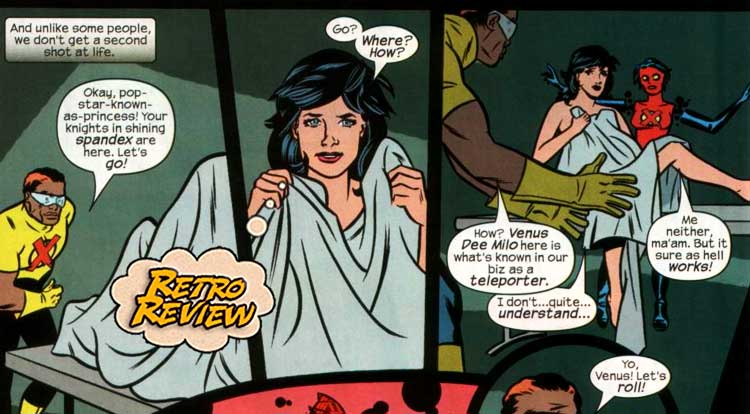 Elton John isn’t the only one who wanted to memorialize the late Princess Diana…  Your Major Spoilers (Retro) Review of X-Statix #13 awaits! Previously in X-Statix: As part of a radical reworking of the X-Titles circa 2001 (the same one that gave us Grant Morrison’s controversial-but-influential New X-Men run, Cassandra Nova, Beak and the eventual awkward Xorn retcon), Peter Milligan and Mike Allred launched a new X-Force title.  The book began with a massacre, as the announced team of mutants was wiped out and replaced, with the new members serving more as a treatise on fame and celebrity culture than as traditional X-fare.  After a relaunch with a new title (partly due to fan backlash at the cynical, satirical take on the house that Liefeld built), Milligan and & Allred upped the ante, amping up the satire while racking up an impressive mutant body count.  When the announcement was made that Milligan intended for the latest member to be a resurrected Diana of Wales, the resulting media blitz brought the kind of notoriety that Jemas/Quesada Marvel reveled in, but unfortunately the response was universally negative, leading to a frenzied reworking of this issue AFTER it had already been solicited as part one of ‘Di Another Day.’  We begin with a roaming spirit with her life flashing before her eyes (but be forewarned: This issue makes little to no sense after the hasty reworking.) “Henrietta Hunter” recalls what her life was like before her passing due to electrocution (the clearly redrawn panel 3) and refers to the “dark tunnel” through which she followed the light back to the mortal realm, a panel clearly drawn to represent the tunnel car crash that caused Diana’s death.  She disturbingly finds a body to inhabit, raising it in her own image, but as soon as she awakens, armed men arrive to keep anyone from finding out about it.  X-Statix immediately finds out about this situation, through unknown channels, and teleports in to defend her while the story makes a rather clumsy point about how none of the mutants will get another shot at life if they die.  (Dying horribly is one of the major themes of X-Force/X-Statix throughout the run, bee tee dubs.)  Having saved the pop star nicknamed “Princess”, they teleport out in a visually interesting fashion. Something about Henrietta’s face in that panel is really disturbing to me.  X-Statix #13 features quite a few full and half-page splashes introducing our heroes, making me wonder how much of the art was able to be reworked.  There are a number of panels that feel out of character for Mike’s usual style, while Henrietta’s face and hair have clearly been redone to hide the resemblance and/or tiara, as seen on the original cover for #13.  That change seems like it was nothing more than adding enough black ink to reshape Henrietta’s hairstyle, but it’s unclear how much other art alteration may have been done, as this visually confounding page demonstrates. It looks to me as though the televisions were superimposed over other images, but I can’t say for certain and can’t find any meaningful analysis of story  changes.  All I can tell you is that the story as written features the government of “Europa” targeting Henrietta for death, wanting to keep her quiet for reasons that were probably in the original script but aren’t evident here.  As for Spike Freeman’s arrogant assertion that the X-Statix team will do as he says proves true when Mr. Sensitive and the team grudgingly agree to let Henrietta join for the boost in ratings and public perception.  Of course, Spike has his own ideas about how to harness that Q-rating. By colluding with the very forces who want her dead (who clearly aren’t anyone near the British monarchy, not at all, you guys), Spike sets up the mutant fighty-fighty that keeps him and his team in the spotlight, including a really offensive stereotypical enemy team called Euro-Trash.  The reveal is made that Henrietta is a mutant with the power of “empathy”, and they set out for a red-carpet event to honor their newest member. The big public event becomes a free-for-all and the X-Statix team is ready to let Henrietta go when Spider-Man arrives to save her, spurring the team into action to make sure he doesn’t steal their headlines.  It’s an interesting meta-statement in a book that seemed clearly designed to do nothing but get attention for Marvel, especially when you consider quotes from the writer saying that Diana was “somehow famous for being famous”, making her perfect for this title.  X-Statix #13 as published is essentially nonsense, with dialogue and caption boxes that clearly don’t represent the art on the page thanks to the rewriting, and a mixed-bag art job from Mike Allred that seems understandably rushed in places, earning 1.5 out of 5 stars overall.

The remaining five issues of the arc are equally weird, and there’s what feels like a massive story shift in part 3 (which may have been the first point that they could create entirely new material, given the lead time of modern comic books) and an ending that doesn’t really end up saying anything at all.  As a fan of the X-Force/X-Statix concept and creators, I have to say that spiking the ‘Di Another Day’ story feels like the right move by Marvel (especially after Buckingham Palace issues a statement condemning the story), but I’d have rather seen a delay in publishing than this half-baked mess.

The hasty rewrite and art corrections show and the removal of Princess Diana completely defuses the intended satire... Not their finest hour.