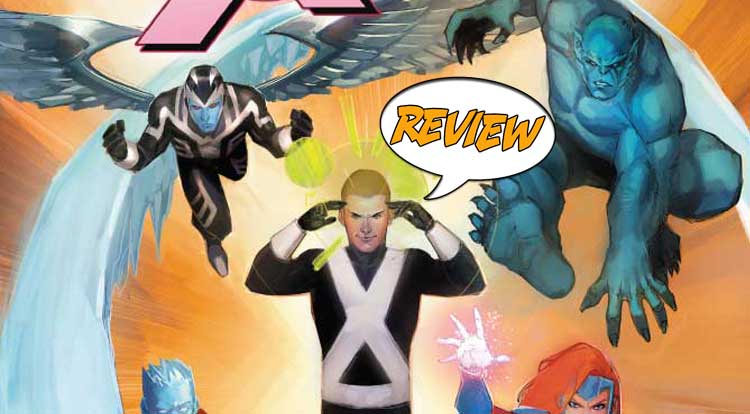 The original X-Men are united, at least the ones who are still living.  Which one is dead?  What day is it?  Your Major Spoilers review of Astonishing X-Men Annual #1 awaits! This issue opens with The Beast, perhaps the best X-Man not named Mimic, entering a fancy eating establishment.  As is his wont, he is barefoot, though he took the time to put on a shirt, and is quite adept at shutting down the maî·tre d’s objections to a giant blue, furry, barefoot man.  Joining his party, we see that the entire thing has been called by Jean Grey, hoping to spend some time with her oldest friends now that she’s back from the beyond.  Unfortunately, things aren’t quite a party, given what they’ve all been through over the past several years, and the spectre of fallen friends hangs over them all.  That’s when one of those fallen friends walks in the door, in the form of X, a younger clone body inhabited by the mind of Charles Xavier.  Charles quite harshly mocks them for their “pity party” and invites them all to a nearby town where he has rented a large house for them all to stay in.  Right about the time I start to wonder if they’re all being mind-controlled, they find that the whole town is completely blase about their new visitors, blue fur, giant wings and all.  Then, X reveals the truth about the small town of Lago, a truth that ties into ancient X-Men history.

A MUTANT VERSION OF ‘GET OUT’?

Astonishing X-Men Annual #1 is really successful at creating an aura of creepy-small-town, with everyone just a little bit TOO pleasant to the visiting X-Men, and it’s interesting to see these characters interacting in their adult states.  The whole thing feels a bit like a family reunion, only Dad has a hipster haircut and a new attitude after his divorce.  (In this case, the divorce was with life, but still…)  I’m not a fan of Travel Foreman’s Beast, but his facial expressions, especially on Iceman, are a hoot throughout this issue.  Most of the book is spent with the X-Men in regular street clothes, all of which look quite stylish and well-drawn, and the detail of Angel being forced to wear a loose tanktop because there aren’t any shirts at Xavier’s tailored for wings is a nice touch.  My sole complaint is the use of Iceman as an almost Rod-Farva-like figure, completely unconcerned by the weird, possibly possessed small town while scarfing down giant cheeseburgers and playing the fool.  Still, even that bit of characterization isn’t WRONG, just not one I’m fond of, and the use of Jean, Hank and especially Warren here is quite inspired.

Rosenberg’s script makes good use of the new proactive, callous X character, balances the remaining founders well and plays off their years of interactions to make for a nice, quiet, personal story.  The ending is particularly well-done, if bittersweet, leaving Astonishing X-Men Annual #1 with an unexpectedly touching 4 out of 5 stars overall.  The art isn’t always to my tastes, but it’s consistent, the body language and expressions are as well-handled as the fight sequence, and the reveal of what Warren has been hiding all issue is just plain genius, as well as scary as all heck.

A nice story that plays off years of history and continuity effectively, with strong, consistent art that works, even if I don't like this version of The Beast.