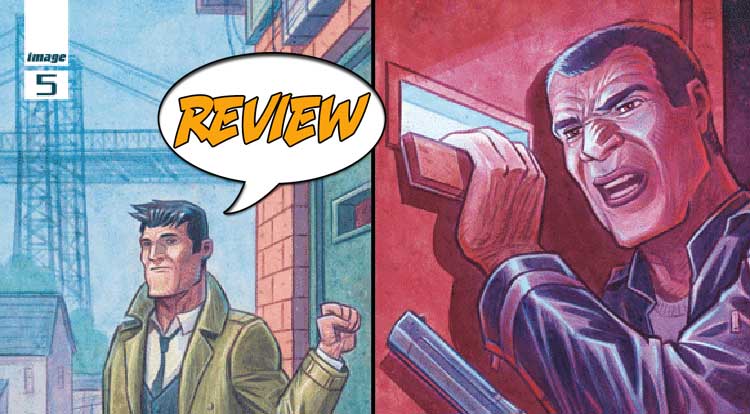 The Great Doxxing has laid flat the internet.  Five years into the aftermath, there are no secrets to big or too small to hide on the worldwide web.  But secrets still need to be transmitted, and couriers, nicknamed the Ledger Men, are the guys just for the job.  And none come harder than Jack McGinnis, with a face like a shovel and fists like piledrivers… Previously in Analog: Jack’s back!  After a sojourn in Japan, notorious ‘Ledger Man’ Jack McGinnis is back on US soil, with a gun in one hand and a briefcase full of secrets in the other.  Now he’s on the trail of the men who killed a boy using his name, and it’s sure to be an ambush.  Find out more in this cliffhanging issue of Analog #5.

ALL I WANTS IS A DAME AND A BOTTLE OF BOOZE

American democracy has crumbled, the sound of jackboots on the march is rising to a crescendo, but men like Jack McGinnis keep on keeping on.  Hard as nails and twice as painful, McGinnis is a Ledger Man, tasked with delivering secrets on paper now that the internet is as naked as a stripper on your birthday.  After barely escaping from a job in Japan, and with a price on his head that would make Elon Musk blanch, McGinnis returns home to discover that someone falsely bearing his name has been killed.

Clearly facing a trap, McGinnis does what he always does, and leads with his fists.  Walking straight into the lion’s den, McGinnis faces off against an old foe he thought long dead.

Writer Gerry Duggan wears his influences on his sleeve, and the Analog #5 is better for it.  McGinnis is straight out of Stacey Keach’s Mike Hammer, a lad with the ladies, able to take more punishment than a Sherman tank, and absolutely unstoppable in a fight.  McGinnis is clearly a fun character to write, with his terse narration, no-nonsense demeanor, and a wicked put down ready to unleash.

Duggan’s writing has clearly been a standout element of the book, with his clever world building and incredibly smart decision to set it after a worldwide doxxing destroyed the internet as a keeper, and transmitter, of secrets.  The knock on effects – secession in California, a virtual police state across America, and hard men moving through the margins of society one step ahead of would-be assassins, are masterfully handled.

It took me a few pages to get into Analog #5, as the pace of the storytelling and the terseness of the writing to a little adjusting.  But the artwork kept me going, and by page 4, the sense of place and atmosphere Duggan had created enveloped me, and I was along for the ride before I knew what hit me.  By the last page, as McGinnis stares tersely at the reader with a glass of booze in one hand, you know that the resolution to the storyline can’t come quickly enough.

Artist David O’Sullivan, with his scratchy line work and square-jawed heroes, must’ve in a previous life been a cover artist for hardboiled pulps back in the 40s and 50s.  His women are luscious and his men unstoppable bricks with arms and legs.  His artwork is kinetic and full of forward movement, working well in tandem with Duggan’s storytelling.  There’s a special moment where O’Sullivan flips the reader’s viewpoint, to an overhead shot that is beautifully realized in just five descending panels.  There is an inevitability to the action on this page that is irresistible to look at, as the eye is drawn from top to bottom with increasing horror.

BOTTOM LINE – A BUNCH OF FIVES TO THE FACE

With its old-school storytelling wrapped around a ‘ripped from the future five minutes hence’ twist, Analog #5 works extremely well, not only as a story in its own right, but a cautionary tale advising against putting all your technological eggs, and secrets, into one basket.  McGinnis may feel like every other hard-boiled detective that has come before, but that’s the reason he is such a commanding figure and perfect narrator for a story set in a fallen world that is still descending, at speed, to ultimate ruin.  McGinnis may not be the hero we’d want, but he is very definitely the hero this series needs.

Like being clubbed over the head with a bottle of Scotch, Analog #5 is a refreshing take on an old noir standby.