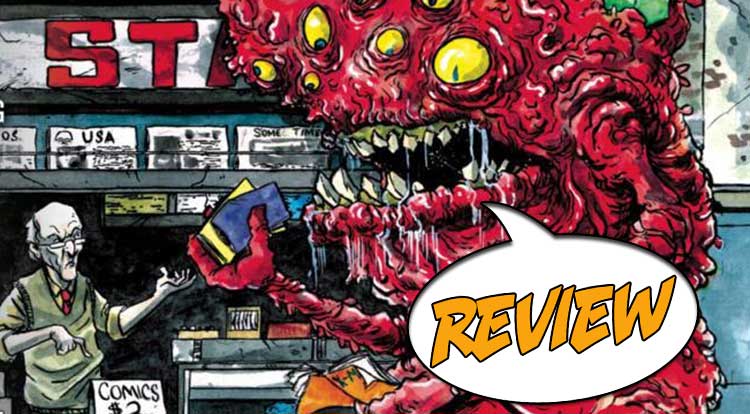 It Came Out on a Wednesday #2 Review

For as long as people have been printing stories, there have been collections of tales by multiple writers, bound together by a common denominator, and packaged for the reading public, these anthologies have often been a proving ground for all stripes of creators. Now, Alterna Comics brings us the latest in their own anthology series, It Came Out On A Wednesday #2. Let’s see what hidden gems we can find. IT CAME OUT ON A WEDNESDAY #2

A VERITABLE LIBRARY OF CHOICES

There are many different types of creators out there, almost as many as there are people. Some are writers weaving tales to entertain, some are artists using their selected medium to express their deepest selves or to evoke a feeling where none was before. When you pick up an anthology, you often get a mixed bag. Sometimes you get a stellar experience where every short story or every serialized installment thrills you, then you get ones where it all just chills you. More often than not, you get a mixed back of good and bad, some favorites and some not so.

With It Came Out On A Wednesday, you get a prime example of this. This second issue contains three (3) ongoing, serialized stories and four (4) short stories, all of varying quality. What one person loves, another may not, so with this anthology you should be able to find at least a few entries you like.

The stories contained here are all part of a Short Story Comic Contest. Once you have read the stories, you are encouraged to vote on Alterna Comics’ website for your favorite, with the winner being announced in the following month’s installment.

The short stories here really vary. Five (5) of the seven stories seem to be done-in-one endeavors. The remaining two (2) are serialized stories which are continued from the first issue. All are well done, and I enjoyed each of them. They range in tone from horror, to fantasy, to sci-fi, to comedy, and I would be hard pressed to pick a single one I liked about the others.

You even get an interview with the cover artist, Kelly Williams, detailing how they came up with the disturbingly funny cover which graces the title.

I want to take a little to spotlight the creative teams here. Short fiction, of any form, is tough. You have to tell a succinct, satisfying story within a limited number of pages, and these people did it.

Kase Ratten: Justin Sane and Juan Calle tell the story of a little girl dealing with a monstrous doppelganger of her brother.

V1rus: Shawn Milazzo, Cem Iroz and Nikki Powers relate how a computer tech gets his revenge on a rival for his true love.

Build Something Greater: an outlaw takes on the robotic establishment as told by Chas! Pangburn and Nico Leon

The Dolls: A mother deals with the loss of her family, and what happens when she gets them back, by Chris Charlton, Ryan Quackenbush, and Tim Fuller.

The Wicked Righteous: Genesis: By Terry Mayo and Dave Swarts, this tells what happens when a plague strikes the world and hard choices regarding survival are made.

Bloodfist: The Portal: Jeremy Massie features a warrior with bloodstained hands as he and his companion travel across a desert and encounter a mysterious portal.

As stated, all of these are entertaining in one way or another. However, I felt that Build Something Greater, with words by Chas! Pangburn and art by Nico Leon was my favorite. Leon’s tight and expressive line work brought the story by Pangburn to life, and it had a quirky, satisfying ending that I liked. Excellent storytelling in 4 pages.  A close second would be V1rus, written by Shawn Milazzo, art by Cem Iroz, and letters by Nikki Powers.  A spurned computer tech in a future setting takes his revenge. At only two pages, Milazzo’s story was satisfying, and Cem Iroz’s oh so detailed art told the rest of the story without knowing the lead-up. Both of these are excellent examples of the right way to do comic shorts.

As I’ve said in other reviews, the anthology format is probably one of the hardest to review. There is so much to cover and so little space to do it. Overall I felt like I was reading a classic title along the lines of Time Warp or Heavy Metal. It was satisfying, with a diverse selection of stories that each had their own little twists. I’m really interested in seeing what comes next from not only the creators featured inside, but from the title itself.

It is also worth noting the price. Alterna Comics are unique in that they are printed on newsprint, but like in the good old days. And despite the high quality of the content, their highest priced monthly is $1.99. In this case, It Came Out On A Wednesday is a $1.99 book, but you get over thirty pages of solid story for your two dollars and a great little interview. The price alone makes it worth a chance.

It Came Out On A Wednesday #2 is a modern day product based on an old concept, a glimpse into how comics used to be. Have a seat and feel free to browse. 1 needs to have a docking position in your pull box. Sit back and fire your lasers for fun.

It Came Out On A Wednesday #2

A quality title at a price that you will have a hard time beating.