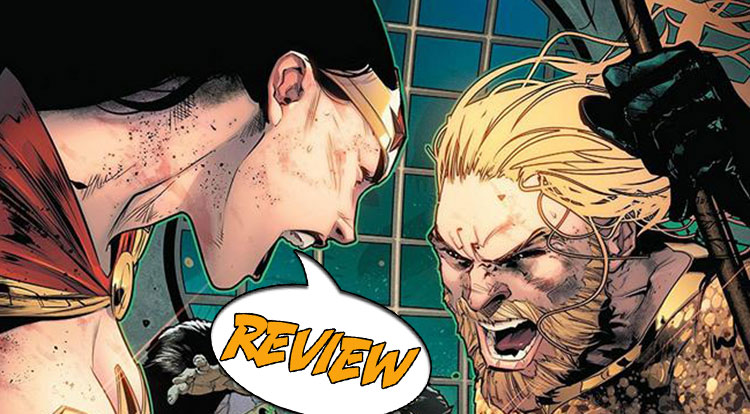 Up until now, it has looked like the Legion of Doom was ahead at every turn. With the sentient sun Umbrax perilously close to taking over Earth itself, can the Justice League tip the balance in their favor? Let’s find out in Justice League #6 from DC Comics. Previously in Justice League: Superman and J’onn J’onzz were being controlled by Lex Luthor and the Joker respectively. Cyborg and John Stewart had fled from Sinestro. Wonder Woman, Aquaman, and the Flash were caught in a hidden underwater base. Meanwhile, we learned what the heck Lex Luthor was up to. After seeing a future in which he was both honored, but known as the “Great Tragedy” (because he had not figured out his own wisdom in his own lifetime) he had been working steadily to move the timeline up.

TO FIND STRENGTH IN WEAKNESS

Justice League #6 starts out with a one-page mini back-story of the Joker. This has been an interesting way to open issues, giving us a brief look back at someone whom we may or may not already know. This leads into a refresher of the current stakes in the plot, also handy since last issue was all from Lex Luthor’s point of view.  Lex Luthor and the Joker finally reach the fraction of the Totality which landed on Earth, and as Lex exults, Batman makes a grand entrance to confront him (all still within Superman’s brain). They fight, Luthor drops the artifact doorknob, and Batman makes a move to grab it.

Back at the underwater Legionnaire’s base, Grodd and the baby Turtle have the heroes there caught up in the Still Force. Manta and Cheetah gather up the artifact they came for, and have a little discussion about how there are seven energies governing the universe, and seven counter-energies to remake it. But that’s only a brief interlude, as back at the other fight, Luthor calls the Joker in (to make J’onn J’onzz attack Superman in order to disrupt Batman). We thought Hawkgirl was out of commission, as does the Joker, but Kendra recovers enough to punch him out and try to take back control of J’onn. Before this really gets even more wildly confusing, Luthor does something that kicks the heroes (except Kendra) back to the Hall of Justice where they appeared battered, but still breathing.

Then we reach the crux of the story. As the team wonders how to fight all this, and John Stewart admits he would be joining Umbrax if Cyborg weren’t blocking him, Cyborg tells him that he’s not blocking him – he’s only protecting their shields. John comes up with the idea of not fighting the forces, but accepting them, and using them. If J’onn J’onzz can connect enough people, John Stewart can show them how to use and accept the negative emotions that fuel the invisible spectrum. At the same time, the Flash needs to slow down enough to access the Still Force. Essentially, they need to admit that they were wrong, and that they were sorry. This is an amazing message, and it fits in this story brilliantly.

FROM DARKNESS TO DAWN

The artwork is great in Justice League #6. Again, the settings are wide-ranging, from the microscopic world within Superman’s brain, to the view of our planet from space; from the underwater lair to the beleaguered Hall of Justice. And there’s so much else to like. I really appreciate the interesting use of panels. The Joker’s backstory is mainly the current image of him, and his history is told through smaller panels in the corners of the page. The fight between Luthor and Batman uses some obliquely set panels (and wow does Batman look ticked in the scene when he appears). And the final double splash uses slightly radiating panels to capture the many different things happening all at once. It’s just a treat for the eyes.

All through this series the art has been amazing, and continues to be. It is somewhat terrifying to see J’onn J’onzz with a decidedly Joker-esque overlay to his face. And I would be remiss not to mention the colors. They are, simply put, beautiful. I like the use of reddish backgrounds (inside Superman’s brain) to set off the fight with Batman. There are a couple lovely silhouetted scenes as well. And as we move toward the end, there’s a subtle shift in tone.

BOTTOM LINE: A STRONG CHAPTER IN A HUGE STORY