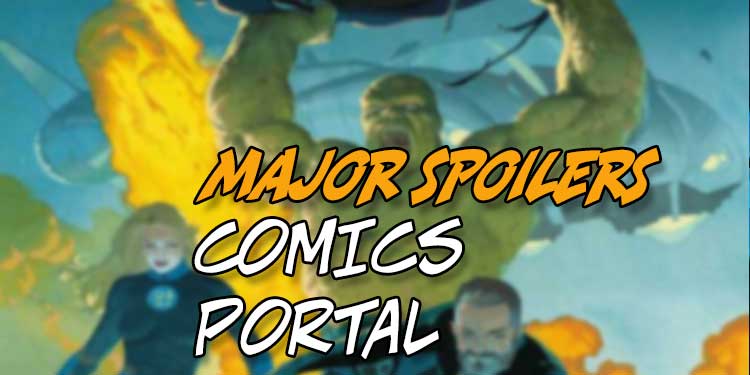 This week, we saw the return of the Fantastic Four at Marvel in the first issue of their new ongoing series.

For once, though, I agree with what the Impossible Man said at the top of a page at the end of the comic. The Fantastic Four as they currently are should have appeared in this debut issue. Since they didn’t, it should have been a prequel, a #0, in my opinion.

The second issue, in which we’re told they DO appear, should have been #1.

HITTING THE GROUND NOT RUNNING But when I buy a book that’s called Fantastic Four, especially the first one, I want to see them as they are now in that issue, not just a hint of them! Really! We should find them as they are on the cover, seems to me!

Granted, there was a flashback of sorts with the FF as they have been in the past. And we saw a significant development with Ben and Alicia, one that was literally decades in the making.

However, that’s not the Fantastic Four. Just like it isn’t the FF when someone replaces one of them, be it She-Hulk or some other Marvel character that’s not in the original group. Every time that happens, I have stopped buying the comic until they are reunited. You know, “because you demanded it!”

Not only that, the issue cost $5.99! For that amount of money, we definitely should have had the real FF in it, even if it’s only in the very last panel!

This was as disappointing to me as Batman #50 when no marriage actually took place. Come on, folks! I’m sick and tired of being teased and not satisfied! I first noticed this kind of storytelling in Marvel’s Ultimate line. For example, there was an entire issue when the FF left their quarters and reached the Fantasticar, with them leaving the Baxter Building at the end. It was all discussion and no action. I never bought another issue of that title after that.

My brother calls this “trade paperback-itis” in that there’s no single-issue stories any longer. We’re thinking of the trade paperback from the very start, so those of us buying individual “floppies” or issues get only a teensy, tiny piece of the story.

Now, I don’t mind a longer story that is told well. I always relay the story of how James Tynion IV was writing DC’s Batman Eternal for 52 issues, and in #26, he revealed the “big bad.” There were some fans online who wretched and complained that it took so long to reveal who the main villain was. I disagreed because Mr. Tynion did a great job of building up to that issue. Worked for me! We got a lot of story featuring Batman and his group until that happened!

But a Number One should be something that focuses on the character or characters the book is about, not be a lead-in to when they get together. I mean, are we really sure the FF will be reunited in #2? I doubt it, and if they don’t, I expect the Impossible Man to be back and even more upset in the back of that book! Kind of like I would be if that happened! If Marvel waits until the final issue of the upcoming trade to bring them together, well, I won’t be around to see it happen! I mean, I’m happy Ben and Alicia are progressing in their relationship! But that’s not the FF! That should have been in Marvel Two in One or something if the entire team isn’t in the issue!

This kind of storytelling has been happening in TV a lot. You had to wait until the final episode of 24 to find out everything going on! And many other shows are doing that as well. I prefer it when a series has an over-arching storyline as well as a short story that wraps up in a single episode. THAT’S the way to do it!

Not long ago, I picked up a collection of older Batman daily newspaper strips. As I read it, I noticed that every day had something significant happen in the story. In other words, in two or three panels, I was cliff-hangered! I just HAD to come back to see what was going to happen next.

With Fantastic Four #1, I’m not certain of that. In fact, I’m going to glance through the second issue to see if they actually do reunite in that book. If not, I’m out! And I’ve been waiting for the FF to come back for a long time! Very disappointing! I know I do rag on Marvel, but as the top-selling comics company, I have very high expectations for them!

I recently interviewed the main creators for the Image comic Crowded. More truly happened in their first page than in the entire FF #1, in my opinion. (You’ll hear that interview in an upcoming episode of my podcast, so stay tuned!)

We need more to actually happen in an issue of today’s comics, I think. Not the illusion of change. Real change, especially when it comes to something that has been built up for months!

What do you think? Did you still enjoy Fantastic Four #1? Or were you also disappointed? If the team doesn’t reunite in the second issue, will you still buy the book? Whatever your opinion, please share your thoughts in the space below!