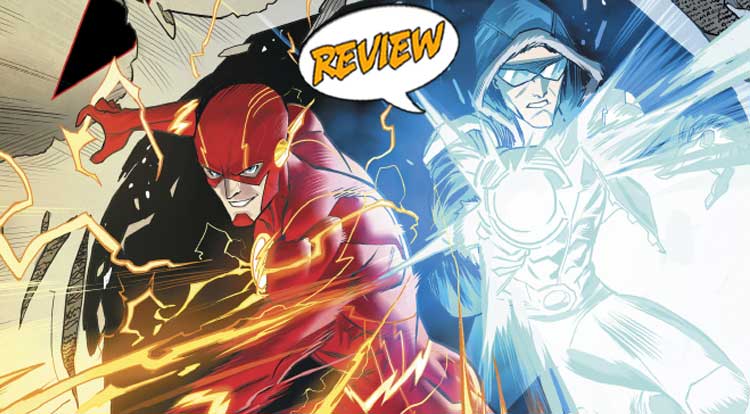 Once again, Barry Allen has broken the universe.  Can even FIFTY-TWO Flashes help him put it all back together?  Your Major Spoilers review of The Flash #52 awaits! Previously in The Flash: Barry Allen races to the House of Heroes at the center of the Multiverse to meet with the Flashes of 52 worlds for info on the new forces he’s recently encountered.  Meanwhile, back in Central City, Trickster’s turning informant against Warden Wolfe, but that brings about a sneak attack that Barry and the time-lost Commander Cold must team up to stop – if they can quit butting heads long enough to do so.

We open with the map of the Multiverse from Grant Morrison’s mini of the same name, showing us that Barry has returned to the House of Heroes to confer with his multiversal counterparts about the strange disturbances in his universe’s Speed Force, as well as the discovery of additional forces.  None of his counterparts have any input, but the trio of Fastback (!), Kid Flash from the ‘Justice Riders’ (!!), and The Accelerated Man want him to consider a “Force Quest”, wherein he finally delves into the source of his powers.  Barry considers is for a moment before returning home where all heck is breaking loose.  Trickster has been pulled out of Iron Heights to testify against a corrupt Warden Wolfe, leading a couple of Para-Angels to kidnap him on behalf of parties unknown, which brings in Commander Cold (a time-traveling policeman who somehow reveres Leonard Snart, which means he’s probably seen Wentworth Miller’s take on him), leading to conflict, a bigger battle and an angry Trickster “hulking-out” with the power of the Strength Force.  Add to that something mysterious behind the case Trickster is built on, Iris West remembering her pre-Crisis wedding and vague references to “what happened” with Wally and Wallace, Barry’s partners.  There’s a LOT going on here…

…A LITTLE TOO MUCH GOING ON

For the most part, the story is handled well, and I enjoy Barry’s slow realization that just declaring that he won’t allow his city or world to change isn’t going to stop the oncoming chaos, but none of the plot threads feel like they’ve got quite enough room to breathe.  The scenes in the House of Heroes are a treasure-trove of references, but even that feels fleeting, and I really think that Iris’s memory issue deserves more space as well.  The final page reveal of a super-strong Trickster makes me hope for some momentum in that story next time around, though.  The art in this issue is interesting, stylizing Flash (especially his cowl-wings) in neat ways that never quite break the rules of reality, and all the super-speed moments feel really kinetic and lively.  Duce’s art in Flash #52 doesn’t always provide a lot of deep expressions, but it gets the job done most of the time, and a photo-realistic snapping turtle in a crash helmet makes for some interesting panels.

The desire to put tons of plot and incident into a comic book isn’t by any means a deal-breaker, and the fast pace of everything in this issue does fit the life of a super-speedster, which makes me think it’s an intentional decision, but The Flash #52 falls a tiny bit short in giving all the threads room to develop, but makes up for it with strong art and some interesting concepts, earning 3 out of 5 stars overall.  It’s an above-average reading experience and I am dying to know more about several of the plot threads in play here.

Meanders a bit, with several simmering plots, and it all feels a little unsatisfying.