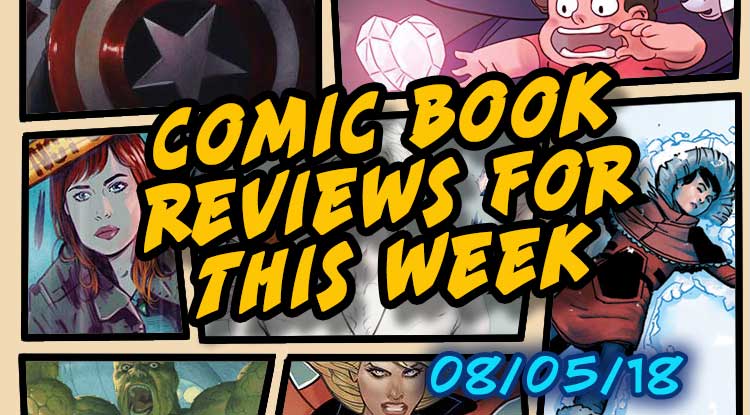 Story-wise, there’s little in the way of fireworks here. Willy’s more experienced comrades shoulder a world-weary burden, having lost a comrade and waiting for Willy to prove himself. While the twist to the story isn’t original, it’s still an intriguing premise that is only really hinted at in this opening issue. Mission accomplished, for now, but further intrigue and revelations await in future issues. – Robert Mammone As with issue #1, I feel like there is a huge mismatch between the painted Alex Ross covers and the interiors of the issue that could be really damaging to a potential reading experience, but that’s not a deal-breaker so much as an annoyance. Captain America #2 makes logical use of the fantastical story points to underscore our hero as a man-out-of-his-era, adding enough complications and personal entanglements to make it all feel very authentic and real, earning 4 out of 5 stars overall. I am not sure what the last page surprise cameo is all about, but I’ll definitely be back next time to find out. – Matthew Peterson The story of Charlie’s Angels #3 is not terribly deep, but we were never expecting that. It is, however, fun. Our narrator is more openly the omniscient TV-narrator guy, and clearly relishes the role. We have a truly light-hearted thriller here. Have I mentioned “fun,” enough times in my review yet? – Ingrid Lind-Jahn Friends are the best thing – ever! And you should never leave a friend behind, even when they are a werewolf (unless you want them to power a battery). There is a good fight sequence, and a great skills challenge in this month’s issue, and it works out very well in the end. – Stephen Schleicher This issue has some great set up, but it’s kind of a bummer that what I think of as “The Fantasic Four” doesn’t appear. This has become a trend in Marvel Media. Daredevil on Netflix did it. We didn’t get to see Daredevil in his costume until the final episode and I’m disappointed that it seems like Fantastic Four is going to relaunch with this slow pacing. That complaint aside, the contemporate pieces that make up this issue are all beautiful and very well crafted. Hoping it’s just a slow start and the first family of Marvel Comics get to the cosmic adventures soon. – Ashley Victoria Robinson

It’s really more of a teaser or trailer than a first issue, but it’s a tease that I totally buy into. – Matthew Peterson

There is a lot of heart in this first issue of the Dan Slott era, and though we don’t have the team back together, we can see where everything is going, and I like it! – Stephen Schleicher If you haven’t been reading this series, I highly recommend it, especially if you are a fan of Carter Hall and his heroic self. It’s a wonderful time to be a Hawkfan! – Stacy Baugher In short, this is an issue with much to offer in terms of story and dynamic art, but one that gets hamstrung by the familiarity of this the story elements and by being a bit pricey, but Infinity Wars #1 isn’t a bad book at all, and if you haven’t read previous takes on this story, it has the capacity to excite readers, earning 3 out of 5 stars overall. Even if you’re a jaded old jerk like me, seeing the dramatic death on the last page is well-done and I’m still smirking about the whole Turk subplot. (If they’d tried to use him instead of The Hood in those “new Kingpin of Crime” tales a couple of years ago, I’d probably have liked that mess a lot more.) – Matthew Peterson The mystery is steadily building. In Nancy Drew #3, we find out a little more about what’s going on, and we find out that there is more we don’t know. There’s a real cliffhanger feel at the end, and it is set up well to entice us back for the next issue. We’re starting to see some individuality among the characters, and the potential for some serious character growth. If you love a good mystery, you should be reading this book! – Ingrid Lind-Jahn Outpost Zero #2 is emotionally rich and lets us in on so many private moments. It reminds us that everyone does not react the same way, even in the same crisis, and sometimes those reactions may seem inexplicable. The future setting allows for this to be a study of a smaller group of people faced with an unusual degree of stressors. This book is well worth reading. – Ingrid Lind-Jahn Make sure Robocop: Citizens Arrest #5 makes it to your read list, or you might end up regretting it. – Stacy Baugher A little #TimeTravelShenanigans and the Power Rangers book set in the past is part of the big crossover too! Kimberly meets her future self, but discovers that she actually is the smart one, while the Ranger-Slayer makes a move that seems like it will bring the ‘Shattered Grid’ to its end. – Matthew Peterson This issue is a weird one, in ways both good and bad, and I admit it is hard to really engage with the story. Turning Rac Shade into the villain of the piece and having his co-stars from the original series saying horrible things to and about him is off-putting for me as a fan of the old book, and I found that the same pliability in the art that makes it realistically depict madness can affect the legibility of the art. Shade The Changing Woman #6 is a fitting end for an odd and metaphysically focused series, and even though it shows the original Changing Man to be a huge jerk, it wraps up the Changing Woman’s story well, earning 3 out of 5 stars overall. – Matthew Peterson Steven Universe: Harmony #1 makes for a nice first chapter, even serving as a decent jumping-on point for new readers and delivering a story that feels like the cartoon without being slavish to its style, making changes to enhance the comic format and earning 4 out of 5 stars overall. With attractive art, cute story and good use of the cartoon cast, it’s a solid issue that will bring me back next time. – Matthew Peterson A great starting point for new readers, and a refreshing new direction for established fans, Pick up Supergirl #21 at your local comic shop. – Stacy Baugher The Sandman Universe #1 is a wonderful beginning to what hopes to be a long run of new stories with the characters of this beloved story. – Stacy Baugher I picked this up without reading the solicitation and I was really expecting a continuation of the John/Sarah Connor story line. Very happily surprised to see the direction this is going, there is lots of room in this universe for this and other stories. – Rodrigo Lopez Tomb Raider: Inferno #3 is an issue your reviewer found hard to like. The writing doesn’t quite hit the right mark, but it does allow the art side of the creative team to shine in a series of extravagant full-page images that fully plumb Lara’s memories and dreams. I would hazard that this sort of issue is a once off, a clearing of the decks before we rejoin the real world action. As such, I think it is a bold, if not quite successful experiment. But where would we be, I suppose, if we did the same thing over and over again without trying something different to draw new readers into the genre? – Robert Mammone