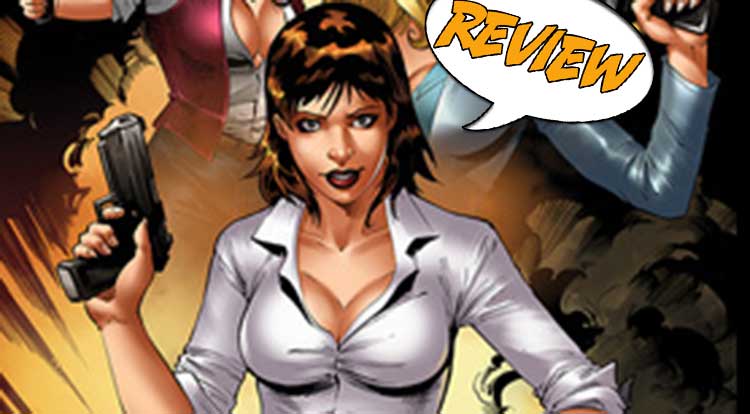 The Angels are on the run in East Germany, and Charlie has been captured by East Germans. But who is orchestrating this, and what nefarious plans do they have for the U.S. President? Previously in Charlie’s Angels: Charlie is knocked out and tied up by a couple of East German agents. Then “Charlie” sends the Angels on a mission to Vienna accompanying a KGB spy (a.k.a. Bryce Steele) who plans to trade U.S. nuclear secrets with the East Germans. As the deal goes down, the Angels step in to stop him, only to find that the East German brought along his own thugs. In the fight, Kelly breaks Steele’s leg and they apprehend him, only to find out he is actually a CIA agent who now cannot complete his mission.

ON THE LAM IN EAST GERMANY

Charlie’s Angels #3 continues to be a fun read. I like the way they start out in the middle of the action, then flashback to how everybody got to that point. It’s very satisfying – you start out wondering, “Where are they now, and what are they doing?” and the explanation follows. We start out with the Angels trying to get into East Germany, in disguise of course. Sabrina is pretending to be French, Kelly is Russian and Jill (being blonde) is Swedish. This is obvious to us (and totally in keeping with the show – we always knew it was them), and the writer pokes fun at this by pointing out that obviousness. There really is a sense of humor threading through this book.  Jill flirts with the guards at the checkpoint, and they get through. And about a minute later, the guards realize that the ink on the visas was not dry, and the Angels are on the run!

Then we flash back to fifteen minutes ago where they recap the last issue, and Bryce tells them that all they need to do is get through the checkpoint and to the CIA safe house. Then, back in the present, the Angels shed their disguises, steal some motor scooters, and race out of town to the safe house. Once they arrive, they contact Bosley who connects them with Charlie. (Or “Charlie” as it turns out.) And now we see what’s going on. Charlie is tied up and his head is covered. Ted (from the first issue) Gardner, the ventriloquist, is doing the talking. The East Germans have him at gunpoint. The Angels fill him in, and give him their location when Ted asks. However, he is resourceful and drops a couple hints that make the Angels suspicious but not the East Germans. Then Jill finds a newspaper with a headline about President Carter giving a speech in Europe. Suddenly things are starting to fall into place.

The Angels sit tight, as “Charlie” instructed. We see a fellow go to their location, plant explosives, and detonate them.  The End.

Or is it? Our ladies are resourceful, remember? They already had their suspicions about “Charlie” and gave him the wrong address, so they apprehend the bomber. He doesn’t check in with the agents who are holding Charlie, so they, in turn, put in a call to a woman named Helena.

We didn’t get the traditional Charlie’s Angels intro in this issue. That’s because we get a variant of it here. Because once upon a time, there were three very bad little girls, and we meet Elka, Naomi, and Frazinka, hardened criminals who were supposed to serve life sentences, but were broken out of prison by Helena. And now they will work for her. They are her Satansbraten (Satan’s Brew, possibly also a reference to a 1976 film by Fassbinder). But yes, apparently they are the evil version of the Angels.

The ladies of Charlie’s Angels #3 are every bit as fashionable as their television counterparts. The hats! The boots! The long flowy skirts! The purple poncho! The artist has done his homework, and he seems to be having fun. The hearts-in-the-eyes (flirting with the guards, remember?) may seem silly in an action book, but in this one, it fits the light tone and for me just hearkens back to the time period. The splash as the guards start to chase the ladies does feature a very stereotypical German-in-lederhosen-with-platter-of-pretzels, but it also features bell-bottoms. What’s not to like?

When Jill shows the newspaper headline, they use an actual black and white photo of President Carter incorporated into the drawn newspaper. I think that’s a nice touch to absolutely set this in the time period, and it may save trouble with identity rights. I also like the scenes of the demolitionist – the little story in four panels as he innocently sets his bombs outside the abandoned clock store, and then the splash of the explosion with clock parts flying everywhere. The Satansbraten are also very distinctive, and I’m looking forward to some interesting fights.

BOTTOM LINE: NOT DEEP, BUT FUN

The story of Charlie’s Angels #3 is not terribly deep, but we were never expecting that. It is, however, fun. Our narrator is more openly the omniscient TV-narrator guy, and clearly relishes the role. We have a truly light-hearted thriller here. Have I mentioned “fun,” enough times in my review yet?

We have a truly light-hearted thriller here. Have I mentioned “fun,” enough times in my review yet?