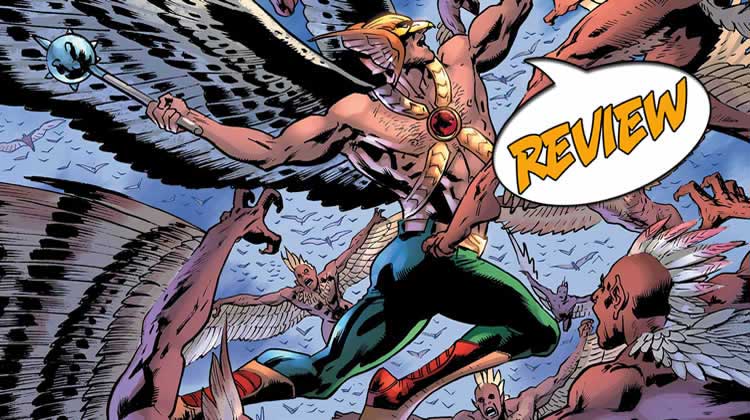 I have this thing about winged or caped characters. Something about them and their ability to soar above the rest of us just appeals to me.

So when I got into comics back in those long-ago days of my youth, I became a huge fan of Hawkman. He’s one of those great heroes that I can’t get enough of.

Then imagine my delight to be reading the newest Hawkman series, and to find that it is excellent! More than that, they’re just getting revved up!

SOLICITATION: While searching for the next puzzle piece in his mission to save the universe, Hawkman takes flight and winds up fighting rampaging thunder lizards on Dinosaur Island—you know, as one does. Recovering from the battle, Hawkman discovers a race of bird people, who force him to fight to prove he’s the one, true Hawkman. That all leads to the next location on his mission, and he’s transported across the galaxy to the last place—and person—he expected to find. Where is he, and who’s he facing? That would be a spoiler alert!

NOT A FLYING BATMAN

If you know anything about Hawkman’s history, he’s been everywhere and everywhen. Thanagar, Egypt and now Krypton, of all places, play into his history. He’s also had many great creators take a stab at him, and not always successfully. His history became a jumbled up mess! Thank goodness for Geoff Johns, and now Robert Venditti, who have untangled the Winged Avengers existence!

I should also point out that one word I can’t use to describe many comics these days is adventure. I loved reading those kinds of stories when I was growing up. Couldn’t get enough of them!

Which brings me to the newest Hawkman comics. In this third issue alone, Carter Hall fights a dinosaur and a feral flock of winged humans. I like that kind of action!

I must also admit that I adored Mr. Venditti’s work on Hal Jordan and the Green Lantern Corps. I was sorry to see it end! Who else can rival Mr. Johns’ writing but Mr. Venditti? Not many, in my mind!

Venditti has done a superb job of explaining the past of Hawkman and has made him an Indiana Jones with wings. And the hero enjoys what he’s doing as well, so he’s not just a barbarian with a mace any longer.

Something that I also love is that Venditti keeps pitching some fun curveballs at us, such as the aforementioned Kryptonian Hawkman and this issue’s sequence with Hawkman’s mace. It behaved like Thor’s hammer, for goodness sake! What’s up with that? I have to know these things!

A comment made on the Internet that I so agree with is that this book has made both Hawkman AND Carter Hall interesting characters in their own rights. That’s quite an accomplishment, I believe!

Another great thing Venditti is doing is giving Mr. Hitch lots of room to give us terrific art. I mean, there are many pages I’d love to have sold as posters! You can just feel the wind around Hawman’s wings as he flies! I have long despised it when artists can’t make his wings at least flap some. They are more like gliders way too often.

Not only that, Hawkman’s updated costume works well. Cool helmet, for example.

I also love the action sequences, and there are plenty of them! They just leap off the page!

If you haven’t been reading this series, I highly recommend it, especially if you are a fan of Carter Hall and his heroic self. It’s a wonderful time to be a Hawkfan!